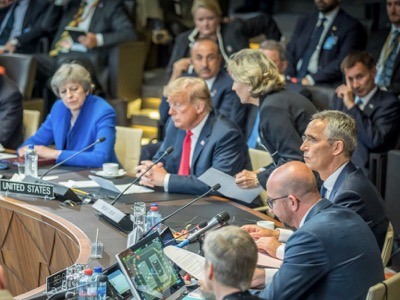 NATO guarantees the security of our territory and populations, our freedom, and the values we share – including democracy, individual liberty, human rights and the rule of law. Our Alliance embodies the enduring and unbreakable transatlantic bond between Europe and North America to stand together against threats and challenges from any direction. This includes the bedrock commitment to collective defence set out in Article 5 of the Washington Treaty. NATO will continue to strive for peace, security and stability in the whole of the Euro-Atlantic area, in accordance with the purposes and principles of the UN Charter.

We face a prolonged period of instability. Russia is challenging the rules-based international order by destabilising Ukraine including through the illegal and illegitimate annexation of Crimea; it is violating international law, conducting provocative military activities, and attempting to undermine our institutions and sow disunity. At the same time, a multitude of threats emanate from NATO’s Southern periphery. While significant progress has been made in defeating ISIS/Daesh, terrorism, in all its forms and manifestations, continues to threaten Allies and the international community and to undermine stability. Instability contributes to irregular migration, trafficking and other challenges for our countries. Allies stand firmly in unity and solidarity in the fight against terrorism.

We will share fairly the responsibilities of defending each other. Real progress has been made across NATO since our last Summit in Warsaw, with more funding by all Allies for defence, more investment in capabilities, and more forces in operations. But even if we have turned a corner, we need to do more, and there will be further progress. We are committed to the Defence Investment Pledge agreed in 2014, and we will report annually on national plans to meet this Pledge.

Today we are strengthening further our deterrence and the collective defence of all NATO territory and populations, building on our Forward Presence and consistent with the decisions taken in Warsaw. Our deterrence and defence is based on an appropriate mix of nuclear, conventional and missile defence capabilities, which we continue to adapt. We will increase the readiness of our forces and improve our ability to reinforce each other within Europe and across the Atlantic. As part of that, we have agreed an adapted and strengthened NATO Command Structure. We are also further reinforcing the cyber defence capabilities of Allies and of NATO itself.

We are strengthening our capacity to prepare against, deter and respond to hybrid threats. Hybrid tactics increasingly target our political institutions, our public opinion and the security of our citizens. Allies are making our societies more resilient against them, and we will respond with resolve when necessary.

NATO poses no threat to any country. All these measures are defensive, proportionate and transparent, and within NATO’s legal and political commitments. We remain fully committed to arms control, disarmament and non-proliferation.

We remain ready for a meaningful dialogue with Russia to communicate clearly our positions and, as a first priority, to minimize risk from military incidents, including through reciprocal measures of transparency. We continue to aspire to a constructive relationship with Russia, when Russia’s actions make that possible.

We are boosting NATO’s contribution to the international fight against terrorism. We have decided, on request of the Iraqi Government and in coordination with the Global Coalition to Defeat ISIS, to establish a training mission in Iraq. We will increase our assistance to the Afghan Security Forces, providing more trainers and extending financial support, as the Government makes an unprecedented political effort to seek a peaceful resolution to the conflict. NATO will do more to help Allies, on their request, to tackle terrorism at home; to provide advice and support to partners, including through the new Hub for the South; and will continue to contribute to the Global Coalition.

We are strengthening NATO’s contribution to projecting stability, because we know that our security is best assured if it is shared beyond our borders. We have agreed a Package on the South to deepen our political dialogue and practical cooperation with our partners in the region, including Jordan and Tunisia. We provide tailored support to our eastern partners Georgia, the Republic of Moldova and Ukraine, as well as to Bosnia and Herzegovina. We will also boost NATO’s cooperation with Finland and Sweden in the Baltic Sea, as well as with our partners in the Black Sea, Western Balkans and Mediterranean regions, each of which is important to Alliance security. We are maintaining our important operation in Kosovo. And while remaining a transatlantic Alliance, NATO will retain its global perspective.

The NATO-EU strategic partnership is essential for the security and prosperity of our nations and of the Euro-Atlantic area. The European and North American Allies contribute significantly to European security and defence. We recognize that a stronger and more capable European defence will lead to a stronger NATO. We therefore welcome the Joint Declaration signed by the NATO Secretary General and the Presidents of the European Council and Commission, which sets out the unprecedented progress being made in NATO-EU cooperation, including on military mobility. We welcome the significant contributions of the members of both organisations to Euro-Atlantic security.

We are committed to NATO’s Open Door policy because it strengthens the Alliance and contributes to Euro-Atlantic security, in keeping with the Bucharest Summit. We warmly welcome the agreement between Athens and Skopje; this success will benefit both countries, the region and NATO. We have decided to invite the Government in Skopje to begin accession talks to join the Alliance once the terms of the agreement are met.

We continue to modernize the Alliance. To face evolving security challenges, we have taken steps to ensure that NATO can continue to act at the speed required. Our new policies on NATO’s support for Women, Peace and Security, and for the protection of civilians and children in armed conflict, demonstrate our determination to step up NATO’s role in these areas.

We pay tribute to all the men and women who serve, and who have served, in NATO operations and missions. Their service and sacrifice has been essential to keep our territories and populations safe.