Contrary to mainstream thinking, the NATO summit did not set the United States against the other members of the Alliance, but President Trump against the intergovernmental senior administration. For Thierry Meyssan, the problem is not whether or not we appreciate the personality of the tenant of the White House, but whether we support him because he is the elected representative of his people, or if we prefer the system’s bureaucrats. 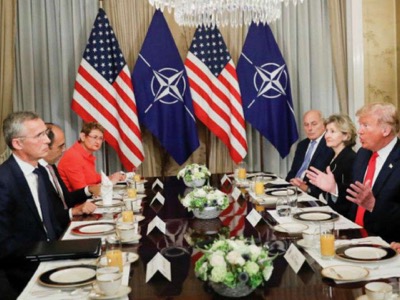 Convened at the residence of the US ambassador in Brussels by President Trump, the Secretary General of NATO, Jens Stoltenberg, was told off in public for his incapacity to maintain the political coherence of the Alliance.

Since 20 January 2017, the arrival at the White House of a believer in productive capitalism has shuffled the international order to the detriment of financial capitalism. Imperialism, which until now had always been blindly defended by US Presidents to the point where we identified it with US foreign policy, is now based on bureaucracies, and in the front line are the administrations of NATO and the EU.

Donald Trump, acting as he said he would during his electoral campaign, is very predictable. However, his capacity to change the system is absolutely unpredictable. So far, he has not been assassinated like John Kennedy, nor forced to resign like Richard Nixon [1], and continues on his path, one step forward, one step back.

The Western powers have forgotten this, but in a Republic, the unique role of elected representatives is to control the administrations of the states they govern. However, progressively, a form of « pensée unique » has taken hold of them all, transforming the elected members into senior civil servants and the states into administrative dictatorships. The conflict between President Trump and his predecessors’ senior civil servants is simply a tentative to return to normality. It is also a titanic battle comparable to that which opposed the two French governments during the Second World War [2].

First of all, it signed a joint Declaration with its counterparts from the European Union on the evening before the summit, [3]. By doing so, it guaranteed the link subordinating the EU to NATO, instituted by Article 42 of the Treaty of Maastricht. This Declaration was signed by the President of the European Council, Donald Tusk, and by the President of the European Commission, Jean-Claude Juncker. Tusk is of Polish origin, born of a family which worked in secret for NATO during the Cold War, while Luxembourg citizen Juncker is the ex-representative responsible for the secret services of the Alliance in his country (Gladio) [4]. The European senior civil servants know that they are in danger since ex-special adviser to Donald Trump, Steve Bannon, came to Italy to support the creation of an anti-system government with the clearly-announced intention of dynamiting the European Union.

Secondly, the NATO administration imposed the signature of the first draft of the Joint Declaration at the start of the summit and not at its end [5]. There was therefore no discussion of the Alliance’s anti-Russian doctrine.

Aware of the trap that had been set for him, President Trump decided to surprise his civil servants. So while all the participants expected a speech about the minimal financial contribution by the Allies to the common war effort, Donald Trump questioned the very foundation of the Alliance - protection against Russia.

Convening the Secretary General, Jens Stoltenberg, at the residence of the US ambassador in the presence of the Press, he observed that Germany nourished its economy with gas from its Russian « friend » while at the same time asking for protection against its Russian « enemy ». By pointing out this contradiction, he relegated the question of finance to second place, which, nonetheless, he did not abandon. Above all, a week before his meeting with President Vladimir Putin, he rendered null and void the long indictment against Russia contained in the Declaration at the beginning of the summit.

Contrary to the comments in the Press, this remark by President Trump was aimed less at Germany than at Stoltenberg himself. It underlines the negligence of the senior civil servants who administrate NATO without ever questioning NATO’s raison d’etre.

The confrontation between the White House and Brussels continues [6].

On one hand, NATO has just endorsed the creation of two joint command centres (at Ulm in Germany and Norfolk in the USA)… and the increase of its personnel by 10%. Meanwhile, the European Union has just created the « Permanent Structured Cooperation » (a capabilities programme which enjoys a budget of 6,5 billion Euros) and France has added the « European Intervention Initiative » (an operational programme). Contrary to the speeches about European independence, these two structures are submitted to the Treaty of Maastricht, and are therefore at the service of NATO. They add to the complexity of European bureaucracy, to the great satisfaction of its senior civil servants.

On the other hand, President Trump has discreetly opened discussions with his Russian counterpart with a view to withdrawing both Russian and NATO troops from their front-line positions.

[1] Richard Nixon was certainly forced to resign because of his responsibility in the Watergate affair. But this only existed by the will of the informer « Deep Throat », namely Mark Felt, one of J. Edgar Hoover’s assistants.

[2] Because of the World War and France’s defeat, the National Assembly, meeting in the spa town of Vichy on 10 July1940, proclaimed « the French state », de facto cancelling out the Republic. This change of régime had been supported for a long time by anti-parliamentarian groups and parties. From this moment on, France was represented by two rival governments – the legitimate government of the Republic, in exile in London, and the legal government in Vichy. In August 1944, the government of the Republic was reinstalled in Paris by de Gaulle, while the state government continued in Sigmaringen, Germany, until April 1945.
The confusion between the French Republic and the French state is still current today, to the point where it is used indiscriminately to speak of the President of the Republic with the formal title of « head of state » and the title « head of the state ».

[6] Brussels is the headquarters of both NATO and the EU.