The warmonger’s response to negotiation

The conflict between transnational financial capitalism and productive national capitalism has entered into a paroxystic phase. On one side, Presidents Trump and Putin are negotiating the joint defence of their national interests. On the other, the major daily newspaper for the US and the world is accusing the US President of high treason, while the armed forces of the US and NATO are preparing for war with Russia and China. 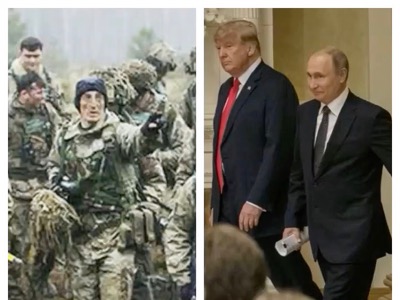 «You have attacked our democracy. Your well-worn gamblers’ denials do not interest us. If you continue with this attitude, we will consider it an act of war.» This is what Trump should have said to Putin at the Helsinki Summit, in the opinion of famous New York Times editorialist Thomas Friedman, published in La Repubblica. He went on to accuse the Russian President of having «attacked NATO, a fundamental pillar of international security, destabilised Europe, and bombed thousands of Syrian refugees, causing them to seek refuge in Europe.»

He then accused the President of the United States of having « repudiated his oath on the Constitution » and of being an « asset of Russian Intelligence » or at least playing at being one.

What Friedman expressed in these provocative terms corresponds to the position of a powerful internal and international front (of which the New York Times is an important mouthpiece) opposed to USA-Russia negotiations, which should continue with the invitation of Putin to the White House. But there is a substantial difference.

Cancelling out the climate of détente at the Helsinki Summit, the planetary warmongering system of the United States is in the process of intensifying the preparations for a war reaching from the Atlantic to the Pacific:

After the landing of an US armoured brigade in Anvers, totalling a hundred tanks and a thousand military vehicles, a US aerial brigade landed in Rotterdam with sixty attack helicopters. These forces and others, all of them USA/NATO, are deployed along the borders of Russian territory, in the framework of operation Atlantic Resolve, launched in 2014 against « Russian aggression. » In its anti-Russian function, Poland asked for the permanent presence of an armoured US unit on its own territory, offering to pay between 1.5 - 2 billion dollars per year.

At the same time, NATO is intensifying the training and armament of troops in Georgia and Ukraine, candidates for entry into membership of the Alliance on the frontiers with Russia.

Meanwhile, the US Congress received with all honours Adriy Parubiy, founder of the National-Social Party (on the model of Adolf Hitler’s National-Socialist Party), head of the neo-Nazi paramilitary formations employed by NATO in the Maïdan Square putsch.

NATO command in Lago Patria (JFC Naples) – under the orders of US Admiral James Foggo, who also commands the US naval forces in Europe and those in Africa – is working busily to organise the grand-scale exercise Trident Juncture 18, in which will participate 40,000 military personnel, 130 aircraft and 70 ships from more than 30 countries including Sweden and Finland, which are NATO partners. The exercise, which will take place in October in Norway and the adjacent seas, will simulate a scenario of « collective defence » - naturally enough, against « Russian aggression. »

In the Pacific, the major naval exercise RIMPAC 2018 (27 June to 2 August) is in full swing - organised and directed by USINDOPACOM, the US Command which covers the Indian and Pacific oceans – with the participation of 25,000 sailors and marines, more than 50 ships and 200 war-planes.

The exercise – in which France, Germany and the United Kingdom are also participating – is clearly directed against China, which Admiral Phil Davidson, commander of USINDOPACOM, defines as a «major rival power which is eroding the international order in order to reduce the access of the USA to the region and thus become hegemonic.»

When Trump meets Chinese President Xi Jinping, Friedman will no doubt accuse him of connivance not only with the Russian enemy, but also with the Chinese enemy.