US bombing of Abu Kamal 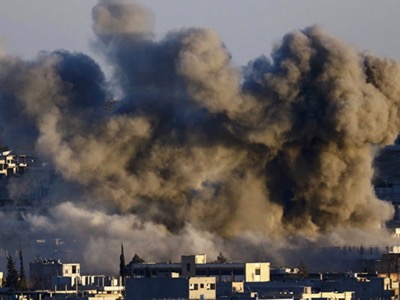 On instructions from my Government, I should like to convey to you the following information:

Last night, aircraft of the so-called international coalition led by the United States of America committed yet another crime when they deliberately targeted innocent Syrian civilians, the majority of whom were women and children. At midnight Damascus time on 13 July, warplanes of that illegitimate coalition struck civilian homes in rural areas of Albu Kamal, Dayr al-Zawr governorate, and perpetrated a massacre in which dozens of innocent civilians were killed or wounded. The air strikes also caused massive destruction to many homes, private property and infrastructure in that area.

Those criminal air strikes that were carried out by the illegitimate “international coalition” targeted the villages of Baghuz Fawqani and Susah, which are situated on the eastern bank of the Euphrates River in rural areas of Albu Kamal. Documented information indicates that, to date, 30 civilians have died and dozens of others have been injured, mostly women and children. Medical and community sources have indicated that the number of dead and wounded is likely to rise, because many of the victims are in a critical condition and because the savage, intense and incessant bombardment of those villages by American warplanes has made it difficult to remove victims from under the rubble and evacuate them. As I stated above, that savage act of aggression has caused tremendous destruction to homes, public and private property, and infrastructure in those villages, where homes have collapsed atop their inhabitants.

The Syrian Arab Republic reiterates its long-standing legal and political position that the “international coalition” is illegitimate and violates the sovereignty and the territorial unity and integrity of Syria, and thereby contravenes the provisions of the Charter and the relevant Security Council resolutions. My country’s Government rejects any justification or excuse offered for the aggression that was perpetrated by the illegitimate “international coalition” and underscores that the leadership of that illegitimate coalition understands the demographic and geographical distribution of that area and is aware that it is populated. The leadership of that coalition also understands that the purpose of such brutal air raids is to put pressure on and take revenge against the people of that area, because they refused to allow the militias of the so-called Syrian Democratic Forces to enter their villages. The United States is seeking to consolidate its presence and further its ambitions in those areas and throughout Syria.

My Government has directed scores of letters to the Secretary-General and the President of the Security Council from the moment that this illegitimate coalition, which operates without a mandate from Security Council and outside its control, was established in 2014. Those letters contained substantiated information regarding the crimes that the coalition has committed in Syria. To date, those crimes have killed hundreds of innocent Syrian civilians and injured tens of thousands of others, some of whom have been permanently maimed, and destroyed Syrian public and private property and infrastructure along the Euphrates River, particularly bridges, schools, hospitals, water pumping stations and the electrical power plants and transformers.

Raqqah city exemplifies the savagery and criminality of the United States of America and the other States that make up the illegitimate “international coalition”, which, instead of combating terrorism in Syria, as it has claimed, has broken every taboo and has even attacked Syrian Arab Army forces several times, in order to break the blockade imposed on the terrorists of the Islamic State in Iraq and the Levant (ISIL) organization. Moreover, that illegitimate coalition and the terrorist militias of the Syrian Democratic Forces have concluded dubious and dirty deals with ISIL, which has been designated a terrorist entity, in order to evacuate the latter’s terrorist fighters, along with their families and weapons, and have them fight the Syrian army in Dayr al-Zawr governorate and elsewhere.

The continued failure of the Security Council and the Secretariat to address the crimes that are being perpetrated by the illegitimate “international coalition” is regrettable and surprising, and arouses suspicions, particularly given that certain Security Council members continue to defend and promote the terrorist organizations that are attacking the Syrian people and the territorial unity of Syria. Those members are also ignoring the massacres that are being perpetrated by the illegitimate international coalition in Dayr al-Zawr, Aleppo, Raqqah and Hasakah before the entire world, under the pretext of combating ISIL. The coalition has destroyed every oil well in that region of Syria, in order to prevent those facilities from returning to operation and becoming capable of resuming production and supporting the economy of the Syrian Arab Republic, which has been greatly harmed by terrorism, the crimes of the illegitimate international coalition and the unilateral coercive economic measures imposed by the United States of America, the European Union and other States.

The Syrian Arab Republic once again calls upon the Governments of the States that form this illegitimate coalition to show a sense of legal, moral and humanitarian responsibility and withdraw from this sinister enterprise. They must not allow the United States, the United Kingdom and France to continue to mislead the international community about the coalition’s true and hostile purpose, which is to control and dominate the peoples and countries of the world and impose the rule of force. My country reaffirms that, ultimately, history and the world’s conscience will record and document the crimes committed by the coalition.

My country’s Government calls upon the relevant United Nations organs to fulfil their duty and responsibility to maintain international peace and security, and to do so in a fair, impartial and professional manner. The Syrian Arab Republic reiterates that it, along with its allies and friends that are dedicated to the rule of law and legality and are striving assiduously to establish security, stability and peace in the world, will continue to make every effort to arrive at a lasting, peaceful solution to the situation in Syria through the conclusion of national reconciliation agreements and by regularizing the status of Syrians who have been misled about the true nature of what is happening in the country. The Syrian State and its allies will continue to fight armed terrorist groups regardless of where they are, in keeping with its national and constitutional duties and its responsibilities under international law to protect its citizens and maintain the country’s territorial unity and integrity. By doing so, Syria is protecting the other peoples of the world from terrorist crimes and the threat of terrorism.

I should be grateful if these identical letters could be issued as a document of the Security Council.