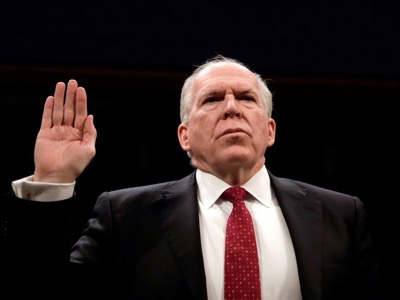 As former senior intelligence officials, we feel compelled to respond in the wake of the ill-considered and unprecedented remarks and actions by the White House regarding the removal of John Brennan’s security clearances. We know John to be an enormously talented, capable, and patriotic individual who devoted his adult life to the service of this nation. Insinuations and allegations of wrongdoing on the part of Brennan while in office are baseless. Since leaving government service John has chosen to speak out sharply regarding what he sees as threats to our national security. Some of the undersigned have done so as well. Others among us have elected to take a different course and be more circumspect in our public pronouncements. Regardless, we all agree that the president’s action regarding John Brennan and the threats of similar action against other former officials has nothing to do with who should and should not hold security clearances – and everything to do with an attempt to stifle free speech. You don’t have to agree with what John Brennan says (and, again, not all of us do) to agree with his right to say it, subject to his obligation to protect classified information. We have never before seen the approval or removal of security clearances used as a political tool, as was done in this case. Beyond that, this action is quite clearly a signal to other former and current officials. As individuals who have cherished and helped preserve the right of Americans to free speech – even when that right has been used to criticize us – that signal is inappropriate and deeply regrettable. Decisions on security clearances should be based on national security concerns and not political views.