The funeral of Senator John McCain was an opportunity to demonstrate the unity of the US ruling class. In the presence of former Presidents Bill Clinton, George Bush Jr and Barack Obama, they turned into an anti-Trump rally, in the same detestation of Russia. 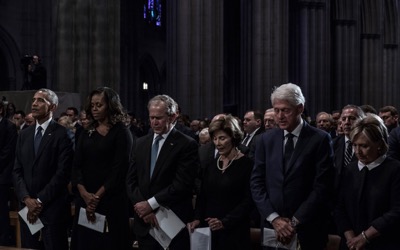 Amid a worsening in U.S.-Russian relations that renowned scholar and left-wing journalist Stephen Cohen has recently characterized as being worse that during the Cuban Missile Crisis, a veritable onslaught of intense and unrelenting anti-Russian sentiment has been unleashed in the U.S.

The supposed rationale for this initiative is hostility toward President Donald Trump and his Russian counterpart Vladimir Putin, though it’s surely possible to discover other grounds for the first’s opponents to criticize him, and the anti-Russian venom is by no means limited to the nation’s government.

Unlike its prototype that began shortly after World War II, however, this time it’s not being spearheaded by an array of rock-ribbed conservatives, leaders of traditional religious groups, immigrants from Eastern Europe and the broader military-industrial complex but by coalition of media personalities (a disproportionate amount of whom are comedians and late-night television hosts), Hollywood celebrities, prominent Democrat elected officials, former intelligence agents and directors, webzine journalists and what during the years of the George W. Bush presidency were known as neoconservatives. As a whole this somewhat ragtag assembly consists of people who describe themselves as liberals, progressives and leftists.

The initial rallying cry for this xenophobic crusade was signaled by Hillary Clinton in the 2016 presidential election campaign when, among other illiberal and unsubstantiated claims, she denounced her then-opponent Donald Trump as someone Russian President Vladimir Putin would "have as a puppet" [1] and routinely slandered Julian Assange and Wikileaks as being under Russian control [2]. In her exact words, "there’s no difference."

The drumbeat of Russophobia intensified in the final days of the campaign and rather than dissipating, only increased after the election, soon taking center stage in American political discourse, with the "Russian hacking" of state voting systems having been decided upon as a strategy for invalidating the election result. The topic has been resurrected in recent days, notably by former Clinton Administration Labor Secretary Robert Reich, in calling for annulling the election of Donald Trump, though the earlier accusation of tampering with voting machines and systems, now largely refuted, is no longer alluded to.

As all such politically-motivated initiatives aimed at the lower emotions and in this case at a several-decade-long history of deeply (perhaps ineradicably) ingrained anti-Russian fear and animus, this one has swept caution, healthy scepticism, moderation and decency aside.

Immediately after the election filmmaker Michael Moore (who’s made a lucrative career out of straddling the divide between liberals and progressives) made inflammatory statements appealing to "patriotic generals" and praising the role of the Central Intelligence Agency, both in clear reference to saving the republic from President Trump.

Hollywood veteran Rob Reiner and the newly-created Committee to Investigate Russia produced a video in which actor Morgan Freeman menacingly intones: "We have been attacked. We are at war." [3]

In recent days late-night TV host and comedian Bill Maher fawned over ex-CIA director John Brennan in a manner more befitting an aspiring poet flattering a Roman emperor on his HBO show. Maher, who has used the word before, coaxed a by no means reluctant Brennan into acknowledging the charge of treason against Trump for having met with Russian President Putin in Helsinki in July. [4]

As writer Michael McCaffrey put it, only in a highly-charged politically environment like that obtaining in the U.S. currently could "a former CIA director who has committed crimes and war crimes such as implementing and covering up Bush’s rendition and torture regime, spying on the US Senate, and masterminding Obama’s deadly drone program, get a delirious ovation from those on the left."

With the death of Senator John McCain on August 25, the quintessential imperialist who spent a disproportionate amount of the days in each year traveling the world inciting insurrections and wars - more than any other American official, and politician of any nationality, in history that I can think of - became the new icon of the American liberal-left self-styled resistance. He has been lionized, nearly beatified as a sterling example of what an American political leader should be, an Ahura Mazda to Trump’s Ahriman in the Zoroastrian scheme.

The current liberal-progressive (its own nomenclature) dispensation has traveled a long way from denouncing Joseph McCarthy’s red hunt - a sign at a recent anti-Trump march read "Joe McCarthy, where are you when we need you?" - and organizing to prevent the executions of Julius and Ethel Rosenberg to clamoring for the 21st-century equivalents of both.

Norway: NATO Rehearses For War In The Arctic