Who wants to relaunch the war in Syria?

Seven years after the beginning of the war against Syria, fought by proxy jihadist forces, the partisans of its destruction want to start again. And yet they have suffered a definite defeat on the ground, where the population, after a momentary hesitation, massively chose to support the Republic. This attempt to restart the war from the beginning can only be understood if its objective has evolved. 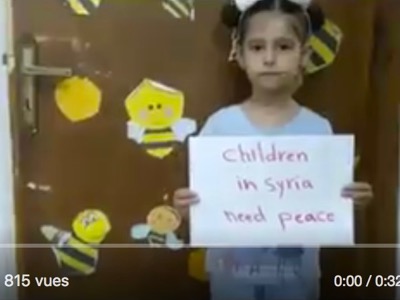 Little Hala (six years old) was chosen by MI6 to announce a new chemical attack blamed on the Syrian « régime » against the civil population of Idib.

Created in Washington in January 2018, under the presidency of David Satterfield, the « little group » was tasked with relaunching the Rumsfeld-Cebrowski project for the destruction of State structures in the Middle East in general and Syria in particular. It initially included Saudi Arabia, the United States, France, Jordan and the United Kingdom (on the understanding that the Arab member states would not be destroyed in the short term).

The entity was secret at its inception, but progressively became more public as Germany and Egypt joined. It seems to have become more reasonable and is now seeking an honourable exit from the crisis. It has made contact with the Astana group (Iran, Russia, and Turkey).

And yet the United Kingdom relaunched the project against Syria by preparing a false flag operation in Kafr Zita. For this purpose, specialists from the Olive company were sent to the area, and chemical weapons were moved to the governorate of Idlib. The White Helmets abducted 44 children, whom MI6 planned to sacrifice and blame their murder on a chemical attack by the Syrian Arab Army against the « rebels ».

MI6 organised the dissemination of this fake news in advance via the false witness testimony of a small child, Hala (photo). They created a Twitter account in her name on 29 July, and about thirty media immediately joined up, waiting for the signal (operation « Eyes on Idlib »). Among them are the BBC [1], Radio Free Europe/Radio Liberty [2], BuzzFeed and The Huffington Post [3] – these are media which knowingly participate in British war propaganda.

Simultaneously, the Pentagon deployed in the Gulf the destroyer USS The Sullivans (DDG-68) with 56 cruise missiles on board, and a В-1В strategic bomber carrying 24 AGM-158 JASSM air-ground cruise missiles on the air base of Al-Udeid in Qatar.

While the responsibility of British Prime Minister Theresa May is clearly established concerning the actions of MI6, we do not know who ordered the US military deployment.

Always paddling in the wake of London, French President Emmanuel Macron has already put forward the idea of relaunching the war, speaking before a meeting of his ambassadors in Paris. Thus, with contempt for the Syrian People, who had democratically elected their President, he proposed to choose in their place - « Let us respect the sovereignty of Syria, but let us truly respect it, by allowing the people to express themselves and to incarnate this sovereignty », he declared.

The authors of this plan know perfectly well that they have already lost the war if we look at it only from the Syrian point of view. Their new objective seems to go even further. It is their intention to provoke a conflict with Russia – in other words, a war which would quickly become global.

Syria and Russia reacted by revealing the facts. Then Russia sent a quantity of military material to Tartus via the container-carrier Sparta-3. Moscow also reinforced its presence off the coast of Syria (currently ten ships and two submarines) by planning vast military manoeuvres, which engage twenty-five ships and about thirty aircraft.

Frightened, the US State Department has just sent ambassador James Jeffrey to calm the countries in the region. He is expected in Israël, Jordan and Turkey. He is accompanied by David Satterfield’s assistant, Colonel Joel Rayburn from Military Intelligence. The US delegation will assure all its interlocutors that Washington is not planning to bomb Syria under false pretences.

If the hosts of the US delegation have courage enough, they will not fail to ask for specifics - is the assistant for the Secretary of State for the Greater Middle East, David Satterfield, pursuing the policies of George Bush Jr and Barack Obama, or is he implementing the new policies of Donald Trump? [4] While London’s position is clearly anti-Russian, and that of the White House pro-US, what about that of the Pentagon?

[1] The BBC is the British public broadcasting service.

[2] Radio Free Europe/Radio Liberty is a public radio channel created by the CIA during the Cold War and financed directly by Congress.

[3] BuzzFeed and the Huffington Post were both created by Jonah Peretti. Today, they are following an editorial line which is violently anti-Trump and anti-Russian.

[4] President Trump is attempting to replace the interests of his country at the centre of US politics. His two predecessors, George Bush Jr. and Barack Obama, served transnational Finance. They knowingly destroyed their own economy.