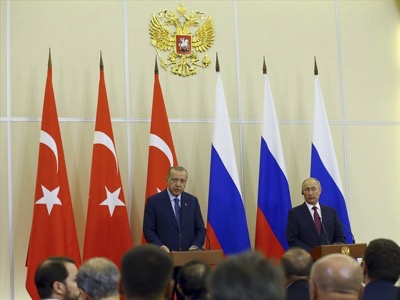 The Republic of Turkey and the Russian Federation, as guarantors of the observance of the ceasefire regime in the Syrian Arab Republic,

guided by memorandum on creation of de-escalation areas in the Syrian Arab Republic as of May 4, 2017 and arrangements achieved in the Astana Process

in order to stabilize yhe situation in the Idlib de-escalation area as soon as possible,

Have agreed on the following :

1. The Idlib de-escalation area will be preserved and Turkish observation posts will be fortified and continue to function.

2. The Russian Federation will take all necessary measures to ensure that military operations and attacks on Idlib will be avoided and the existing status quo will be maintained.

3. A demilitarized zone, 15-20 kms deep in the de-escalation area will be established.

4. The delineation of exact lines of the demilitarised zone will be determined through further consultations.

5. All radical terrorist groups will be removed from the demilitarized zone by October 15.

6. All tanks, MLRS, artillery and mortars belonging to conflicting parties will be withdrawn from the demilitarized zone by October 10, 2018.

7. Turkish Armed Forces and the military police of the Armed Forces of the Russian Federation will conduct coordinated patrols and monitoring with UAVs along the boundaries of the demilitarized zone.
With a view to ensuring free movement of local residents and goods and restoring trade and economic relations.

8. Transit traffic on the routes M4 (Aleppo-Latakia) and M5 (Aleppo-Hama) will be restored by the end of 2018.

9. Effective measures will be taken for ensuring sustainable ceasefire regime within the Idlib de-escalation area. In this regard, the functions of the Joint Iranian-Russian-Turkish Coordination Center will be enhanced.

10. The two sides reiterated their determination to combat terrorism in Syria in all forms and manifestations.

Done in Sochi on September 17, 2018 in two copies both in English and Russian having equal force.

Source : “Memorandum on Stabilization of the Situation in the Idlib De-escalation Area”, Voltaire Network, 17 September 2018, www.voltairenet.org/article203066.html

Source : “Memorandum on Stabilization of the Situation in the Idlib De-escalation Area”, Voltaire Network, 17 September 2018, www.voltairenet.org/article203066.html