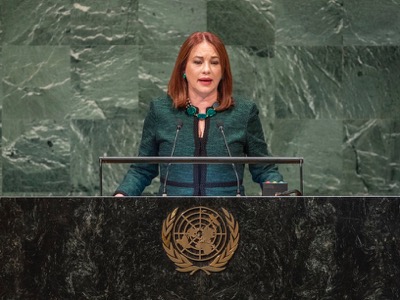 It is an honour to welcome you to the seventy-third session of the United Nations General Assembly. I welcome you to the only place where a meeting such as this is possible. Only this Assembly, as the main deliberative and representative body of the United Nations, offers an opportunity to all the world’s peoples and leaders to listen and to be heard on an equal basis.

The United Nations has made an enormous contribution to humanity. International law, the promotion of peace, human rights, environmental protection standards, goals for sustainable development and the main components that regulate global co-existence all originated in this very Assembly.

The work of the United Nations continues to be as relevant today as it was 73 years ago.

Multilateralism is the only possible response to the global challenges we face. To weaken it or call it into question would only create instability, confusion, mistrust and polarization.

Millions of people around the world are enduring violence, war, material shortages and the effects of climate change. Uncertainty and fear are a daily reality for these millions of human beings. Inequality has deprived many societies of hope and opportunities. The absence of dreams and a meaning in the

future is being used to divide our communities, intensifying racism, xenophobia and violence, all of which represents the exact opposite of the Charter we adopted in 1945.

No one can be indifferent to human suffering. Wars, conflicts, economic crises and environmental degradation affect us all equally.

We live in an interconnected world that compels us to sustain global dialogue and the multilateral response. For that reason, I have proposed that we take up the multilateral agenda with a renewed commitment based on three principles: global leadership, shared responsibility and collective action.

Shared responsibility, because we all share a common commitment to safeguard social cohesion and human dignity, and the health of the planet.

Collective action, because the most critical problems of humanity concern us all. I invite you to take inspiration in the age-old Andean principle of “minga”, which refers to a collective effort and shared work that is carried out for the benefit of the community. Let us therefore create a “global minga” to build societies that are more egalitarian, peaceful, sustainable and resilient.

This year, I call on you to work together on seven priorities.

The first priority of this Assembly will be gender equality and the empowerment of women, which is an ongoing debt owed to over half of the world’s population that is holding back global development. Achieving women’s economic and productive inclusion could increase world gross domestic product by 11 per cent by 2025. Regrettably, violence against women continues to be found in every region. Girls and adolescents still lack sufficient access to good-quality information and education, which help to reduce inequalities.

The second priority is the implementation of the new global compacts on migration and refugees, which will benefit around 260 million migrants and 25 million refugees who have been displaced by conflict and violence.

The creation of decent work opportunities for all is the third priority, since this is one of the most important challenges of public policy in terms of the development and sustainability of social security systems.

Fourthly, we will work to give greater attention to environmental protection and to make progress on the agreements aimed at slowing climate change. Heatwaves, forest fires, storms and floods are leaving behind a trail of death and destruction. In August, the State of Kerala in India suffered its worst monsoon flood in recent history, which killed 400 people and displaced a million more from their homes. Hurricanes killed thousands of people in 2017, making them one of the deadliest extreme climate disasters in history. We have a responsibility to slow the production and consumption policies and habits that are destroying our planet.

I have proposed to highlight the problem of plastic pollution as a widespread environmental threat that affects the health and well-being of everyone in the world. The Great Pacific Garbage Patch is more than

The fifth priority relates to the importance of deepening the political and social commitment to persons with disabilities. Greater awareness is still needed of their specific needs. Accessibility, inclusive and good-quality education and decent jobs are all challenges faced by the largest minority.

The sixth priority is the revitalization of the United Nations, and here we will work on three areas: implementing the reforms of the system; strengthening the revitalization of the General Assembly, to optimize its working methods and enhance its deliberative and decision-making role; and continuing to reform the Security Council on the basis of the will and commitment of the States.

The seventh priority will be peace and security and the role of young people in conflict prevention. The Assembly should become the main peacebuilding organ, through a preventive approach. Sustainable peace should be rooted in dialogue and understanding. Facilitating this dialogue will be my priority. The General Assembly should drive efforts to ensure that young people have greater opportunities and political participation, to avoid situations that lead inexorably to violent extremism.

Peace and security is one of the central pillars of the work of this Organization. The most acute conflicts and disagreements are settled through dialogue, rapprochement, generosity and mutual understanding, even when there are cultural and religious differences.

In recent months, some of you have taken significant steps towards peace and understanding, which is inspiring and deserves recognition from us all.

In July, the President of Eritrea and the Prime Minister of Ethiopia signed a Joint Declaration of Peace and Friendship to put an end to decades of conflict between the two countries. The state of war has ended and diplomatic relations, transport, trade and communications are being re-established.

Similarly, in April, the Panmunjom Declaration for Peace, Prosperity and Unification of the Korean Peninsula was adopted between the Republic of Korea and the Democratic People’s Republic of Korea. Both nations agreed to work together to put an end to decades of war and conflict. This represents a historic milestone on the path to a new era of peace and the denuclearization of the Korean peninsula.

Both events give us hope in a world where many conflicts are still awaiting a peaceful solution.

The challenges addressed in the Charter of the United Nations have evolved. The threats of climate change, the erosion of biodiversity, human trafficking, environmental pollution, large displacements of both migrants and refugees, terrorism and ethnic conflicts are now at the top of our agenda.

We have entered a technological and digital era that is fostering economic, social and cultural exchanges that were unimaginable only a few decades ago. This Organization needs to be better prepared to deal with these challenges.

This is why we must make progress in implementing the reforms of the United Nations system. We want an Organization that is more efficient and responsive and that reflects the political and economic reality of a changing world. The leadership and commitment of the States and the Secretary-General, His Excellency António Guterres, inspire us to take decisive steps forward in this respect.

We must maintain our vision and commitment regarding implementation of the 2030 Agenda for Sustainable Development, as this is the only way to ensure that everyone can live in dignity and in peace.

I invite us all to pay particular attention to the vulnerabilities of countries in special situations and the efforts they must make to achieve the Sustainable Development Goals. Small island States, landlocked countries and least developed countries require that we share responsibility for the achievement of these Goals.

I confirm my commitment to Africa and its peoples. Let us devote our best efforts to accelerating the implementation of development programmes in Africa. Let us act with Africa as well as talk about Africa.

One of the remaining challenges facing this Organization is to achieve a permanent and lasting peace in the Middle East, by aiming to implement the resolutions adopted by this Assembly.

This year, we commemorate the seventieth anniversary of the Universal Declaration of Human Rights. The fight for human rights remains a challenge in the world.

Seventy years ago, a great woman led the work of the Human Rights Commission in charge of drafting the Universal Declaration, Mrs. Eleanor Roosevelt. One of her phrases illustrates, in a simple way, why we must work to bring this Organization and its decisions closer to our peoples. Mrs. Roosevelt pointed out, and I quote:

“Where, after all, do universal human rights begin? In small places, close to home – so close and so small that they cannot be seen on any maps of the world. Yet they are the world of the individual person; the neighbourhood he lives in; the school or college he attends; the factory, farm or office where he works. Such are the places where every man, woman and child seeks equal justice, equal opportunity, equal dignity without discrimination. Unless these rights have meaning there, they have little meaning anywhere. Without concerned citizen action to uphold them close to home, we shall look in vain for progress in the larger world.” End of quote.

I would like to inaugurate the seventy-third session of the General Assembly with an effusive call to world leaders to meet the needs of our peoples and not to lose heart in their efforts to build a more peaceful, more secure and more human world order, where everyone can find their place with dignity.

Let us therefore build a United Nations that is more relevant to all.

Opening of the 73rd session of the United Nations General Assembly