The strategy of demonising of Russia

The strategy of the European populist parties linked to Steve Bannon has run into a difficult contradiction. Logic would seem to indicate that they should be seeking a rapprochement with Russia, as the Italians have done, for example. But their US sponsor is working in the opposite direction - to sabotage the economy and the political confirmation of Moscow. 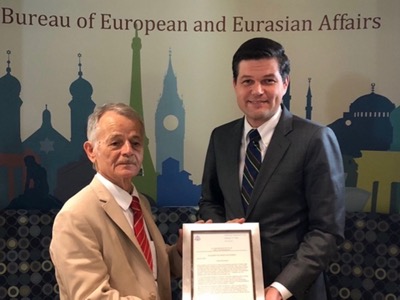 The director of the Bureau of European and Eurasian Affairs for the State Department, Wess Mitchell, is tasked with preventing the development of Russia as a competitor for the United States. Last July, he congratulated Ukrainian Tatar deputy Moustafa Djemilev (known as Moustafa Abdülcemil Cemiloğlu) for his sabotage operations in the Crimea. Once a CIA agent, Djemilev founded the International Islamic Brigade with the help of the Ukraine and Turkey.

The government contract, adopted last May by the Five Stars Movement and the League, confirms that Italy considers the United States its « privileged ally ». A link which was reinforced by Prime Minister Giuseppe Conte who, at his meeting with President Donald Trump in July, established with the USA « a strategic cooperation, almost an exercise of twinning, by virtue of which Italy will become a privileged interlocutor of the United States for the principal challenges which must be faced ». However, at the same time, the new government signed a contract declaring an « opening to Russia, which should be perceived not as a menace, but as an economic partner » and even as a « potential partner for NATO ». Rather like persuading the devil to feel good about holy water.

In this way, both the government and the opposition can ignore the US strategy of demonising Russia, which is aimed at creating the image of a dangerous enemy against whom we must prepare to fight.

This strategy was exposed, in a hearing at the Senate, by Wess Mitchell, Assistant Secretary of the State Department for European and Eurasian Affairs. « In order to stand up to the Russian menace, US diplomacy must be backed up by a military power which is second to none and fully integrated with our allies and all our instruments of power » [1].

Increasing its military budget, the United States began to « recapitalise the nuclear arsenal », including new B61-12 nuclear bombs, which, from 2020, will be deployed in Italy and other European countries against Russia.

The United States, specifies the Assistant Secretary, have spent 11 billion dollars since 2015 (this will rise to 16 billion in 2019) for the « European Dissuasion Initiative », in other words to potentialise their military presence against Russia in Europe.

Inside NATO, they have managed to force an increase of more than 40 billion dollars in the military spending of their European allies, and establish two new command centres, including one situated in the USA for the Atlantic, to defend against « the threat of Russian submarines ». In Europe, the United States give particular support to « the States along the front line », like Poland and the Baltic countries, and they have cancelled the restrictions to the supply of weapons to Georgia and the Ukraine (that is, the States which, with the aggression against South Ossetia and the Place Maïdan putsch, triggered the US and NATO escalation against Russia).

The representative from the State Department accused Russia not only of military aggression, but also, in the United States and in the European states, of operating « psychological mass campaigns against the population in order to destabilise the society and the government ». In order to implement these operations, which are part of the « continual effort by the Putin mechanism for international domination », the Kremlin uses the « panoply of subversive policies once employed by the Bolsheviks and by the Soviet state, updated for the digital age ».

Wess Mitchell accused Russia of techniques in which the USA excel – they have 17 federal agencies for espionage and subversion, including the State Department. It was this same organisation which has just created a new figure - « Senior Advisor for Russian Malign Activities and Trends » [2] - charged with developing inter-regional strategies. On these bases, the 49 diplomatic US missions in Europe and Eurasia must set up, in their respective countries, specific plans of action against Russian influence.

We do not yet know what the US embassy’s plan of action may be in Italy. But as the « privileged interlocutor of the United States », Prime Minister Conte must know what it is. He should communicate this knowledge to the Parliament and the nation, before the « evil activities » of Russia destabilise Italy.

[2] Senior advisor for Russian Malign Activities and Trends, or SARMAT, which is also the name of the latest Russian intercontinental missile. Amused reaction by the spokesperson for Russian Minister for Foreign Affairs - « It’s a violation of the author’s rights », declared Mme Zakharova.