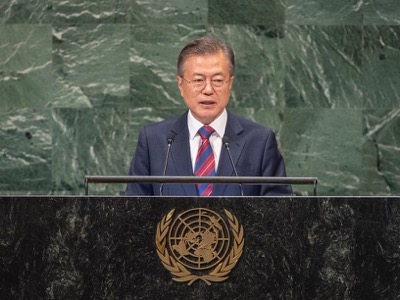 I would like to express my deepest condolences on the passing ofKofi Annan, the 7th Secretary-General of the United Nations. The world will forever remember his name that has been etched in the road to peace.

I also hope that the United Nations will make further progress in contributing to the international community under Secretary-General Antonio Guterres’s excellent leadership.

As I had done last year, I stand here once again with a sense of urgency and excitement.

Over the past year, something miraculous has taken place on the Korean Peninsula. For the frrst time in history, the leader ofNorth Korea crossed the Military Demarcation Line to visit Panmunjeom. A historic summit between the United States and North Korea was also held on the Sentosa Island in Singapore.

Chairman Kim Jong Un and I removed the shadow of war and resolved to usher in an era of peace and prosperity. At the U.S-North Korea summit, the two sides agreed to work towards achieving complete denuclearization on the Korean Peninsula, ending hostile relation and establishing a permanent peace regime. President Trump and Chairman Kim moved and gave hope to those who desire peace all around the world.

North Korea dismantled its nuclear test site in Punggye-ri under the observation of the international community. The United States and the Republic of Korea suspended large-scale joint military exercises and built trust.

I would like to thank and salute President Trump and Chairman Kim’s courage and resolve as they usher in a new era on the Korean Peninsula as well as in U.S-North Korea relations.

Last week in Pyongyang, I met Chairman Kim for the third time and reached an agreement once again to turn the Korean Peninsula into a land of peace free from nuclear weapons and threats. Chairman Kim expressed his hope of completing denuclearization as soon as possible to focus on economic development.

Moreover, Chairman Kim expressed his commitment to permanently dismantle the missile engine test site and launch platform in Dongchang-ri under observation of the international community as a first step, in order to expedite progress in denuclearization.

Furthermore, he expressed his frrm willingness to continue to take additional denuclearization measures including the permanent dismantlement of nuclear facilities in Yongbyon as the United States takes corresponding measures in the spirit of the Sentosa Agreement.

The Korean Peninsula has remained under the armistice over the past 65 years.

Ending the Korean War is an urgent task. It is a process that we must go through in order to move towards a peace regime. I look forward to seeing bold measures for denuclearization implemented among the related countries, leading to the declaration to end the War.

Regardless of the challenges that lie ahead, the leaders of the South, the North and the United States will move step by step towards peace based on mutual trust.

Such a dramatic change has been possible thanks to the support and encouragement of the people around the world who desire peace. In particular, the United Nations gave North Korea the courage to embark on the road to peace. I would like to express my gratitude to the United Nations for its role.

This is, however, just the beginning. I would like to ask for continued support and cooperation from the member states on our journey tow ds complete denuclearization and permanent peace. The Republic of Korea will.spare no effort to encourage North Korea’s participation in the international community while adhering to the resolutions adopted by the United Nations.

Last winter, a prelude to peace on the Korean Peninsula unfolded in PyeongChang in Gangwon Province. It was the moment when the Olympic Truce resolution adopted at the UN General Assembly in November 2017 came to precious fruition.

Secretary-General Guterres and many heads of state extended their congratulations on the participation of North Korean athletes and officials in the PyeongChang Olympic Winter Games. They expressed their wishes for unity and peace on the Korean Peninsula. The world was awakened to the sense of new history of peace being written.

Just over a month after the close of the PyeongChang Paralympic Winter Games, Chairman Kim and I met for the first time in Panmunjeom. The United Nations welcomed and actively supported the adoption of the Panmunjeom Declaration.

At the 72nd Session of the UN General Assembly, I expressed the hope that North Korea will choose peace on its own accord in order to establish sound and sustainable peace. This hope was shared by the United Nations and all of the international community.

North Korea responded positively to our hopes and calls. Chairman Kim changed the direction of the political situation on the Korean Peninsula through his New Year’s address on the first day of this year. The participation of North Korea’s athletes and delegation in the PyeongChang Winter Olympics provided a decisive momentum to break the impasse in building peace.

On April 20, North Korea officially ended its policy of nuclear development and has since devoted all of its efforts towards economic development. On September 9, in the ceremony marking the 70th anniversary of its foundation, North Korea expressed its commitment to peace and prosperity instead of boasting its nuclear capabilities. North Korea moved out of longstanding isolation on its own initiative and stands before the international community once again.

Now, it is the international community’s turn to respond positively to North . Korea’s new choice and efforts. We must assure Chairman Kim that he has made the right decision in committing to denuclearization. We must encourage North Korea to stay on the path that leads to permanent and solid peace.

The role of the United Nations is crucial. The UN Secretariat has continued its efforts for dialogue and engagement, including the invitation ofNorth Korean officials to international conferences.

The United Nations has stated its commitment to "leave no one behind." My sincere hope is that the UN’ s vision of sustainable development will be realized on the Korean Peninsula.

I have no doubt that if the international community paves the way, North Korea will not stall on making strides towards peace and prosperity. The Republic of Korea will spare no effort to guide North Korea towards that path.

The process of working towards denuclearization and establishing peace on the Korean Peninsula is a process that also leads to building peace and cooperation in Northeast Asia.

Northeast Asia is home to one-fifth of the world’s population, and it accounts for a quarter of the global economy. However, regional conflicts stand in the wayofpursu g broader cooperation. We will begin the work of resolving conflicts in Northeast Asia starting from the Korean Peninsula.

I believe that the East Asian Railroad Community will be able to serve as a starting point for the creation of an energy and economic community in East Asia, and going a step further, lead to a multilateral peace and security architecture in Northeast Asia.

The two Koreas are working to reconnect railroads and roads that had been disconnected. Going forward, the Republic of Korea will be engaging in close consultations with countries in the region on concrete steps towards the East Asian Railroad Community.

As we work to realize the UN spirit of multilateralism and pave the way for a future of shared prosperity, I would like to ask for the support and cooperation of the international community.

This month, the Government of the Republic of Korea announced its vision of an "inclusive nation" based on a people-centered governing philosophy. We are moving towards a fair and just nation as well as a society in which no one is discriminated against and everyone lives in harmony.

The Republic of Korea is also increasing its assistance to people who are suffering from human rights violations and discrimination, particularly the most vulnerable groups, including children, youths, women and those with disabilities.

We increased our financial aid for refugees five times in the past five years.

Starting from this year, Korea is providing 50,000 tons of rice every year to developing countries that are suffering from severe food crises.

I believe that there needs to be a holistic approach encompassing peace, development and human rights to fundamentally resolve humanitarian crises.

The Government of the Republic of Korea will engage in discussions and provide support to "make the United Nations relevant to all people."

This year marks the 70th mmiversary of the adoption of the Universal Declaration ofHuman Rights. Anyone who has confronted the abuse of power to advance human rights carries in his or her heart the first clause of the Declaration, "All human beings are born free and equal."

In particular, I am working to realize gender equality in a tangible way as an important part of our administrative agendas. All forms of discrimination and violence against women are being dealt with even more sternly.

Responding to climate change and transitioning to a low-carbon economy are challenges and tasks facing our generation.

The Government of the Republic of Korea will raise its share of renewable energy in the nation’s total power generation to 20 percent by 2030.

We will faithfully implement the goal of reducing greenhouse gas emissions by 2030 in compliance with the Paris Agreement and assist developing countries’ pursuit of sustainable development by supporting them with climate change responses.

For the two·Koreas,the sit¢ificance of the United Nations gpes .beyond any international organization. At the 46th UN General Assembly on September 17, 1991, all of its 159 member states unanimously adopted the resolution for joint accession by South and North Korea to the United Nations. That date was coincidentally ’World Peace Day’.

Now, after 27 years have passed, South and North Korea are realizing the pledge made on that day. We have crossed the barriers of division and are tearing down the walls in our heart. We are proving to the international community that when we come together, we have sufficient means to establish peace.

We all desire peace. Peace represents the relatives and neighbors we love, and the hometowns we long for. Peace means sharing what we have together. A peace we have all achieved together is a peace for all.

I’m confident that all of you will always be with us on the path to permanent peace and denuclearization on the Korean Peninsula as well as on the journey to a peaceful world.