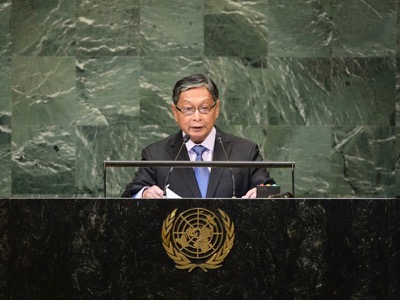 I wish to extend sincere congratulations to you on your election as the President of the 73rdSession of the General Assembly. We firmly believe that under your able stewardship this session will be fruitful.

We live in challenging times. This year s theme, Making the United Nations relevant to all people: global leadership and shared responsibilities for peaceful, equitable and sustainable societies is, therefore, most appropriate. It serves to remind us of the need to strengthen the role of this important organization to overcome the complex challenges we face today. In this process, we must not forget the core principles of the UN Charter, including the principle of sovereign equality. It is also important to remember that, the promotion of economic, social, cultural and humanitarian interests, as well as the promotion and protection of human rights and fundamental freedoms, are to be attained through international cooperation. Nor should we forget the international character of the United Nations.

It is only through constructive and peaceful approaches that we will be able to create a better United Nations one that is relevant to all nations. Only then can our hopes for global leadership of shared responsibilities become a reality.

Here, I wish to stress that Myanmar’s view on the role of the United Nations remains unchanged. There are no suitable multilateral platform other than the United Nations for countries of the world to work together to find solutions to overcome global challenges.

Let me apprise this august assembly of our efforts to transform Myanmar from an authoritarian system to a democratic one; our effort to bring about sustainable development and to build a society where stability, peace, and harmony prevail.

A country without peace and stability cannot achieve economic development. This is our conviction. Accordingly, our democratically-elected government has given priority to national reconciliation and peace since we assumed office.

We are convinced that ethnic strife and armed conflicts in Myanmar can only be ended through political means. Lasting peace will become a reality only when the democratic federal union to which our people aspired is established.

We are, therefore, conducting negotiations at the Union Peace Conference - the 21stCentury Panglong to reach agreement on the fundamental principles for a democratic federal union. The three Sessions of the conference held so far have adopted fifty-one fundamental principles which will become part of the Union Peace Accord. To ensure that the process is inclusive, we continue negotiations not only with the eight ethnic armed groups that have signed the Nationwide Ceasefire Agreement (NCA) but also with those that have yet to come on board.

During the past year, two more ethnic armed groups, namely the New Mon State Party and the Lahu Democratic Union, joined the peace process by signing the NCA. We will continue our endeavours to bring all ethnic armed organizations under the NCA umbrella and to the conference table.

Essential to our endeavours to bring peace and prosperity to the nation is the need to ensure balanced development in the economic, social and environmental spheres. To this end, the Government has laid down the Myanmar Sustainable Development Plan - MSDP 2018-2030 which is in accord with the United Nations 2030 Sustainable Development Agenda. The MSDP recognizes three pillars peace and stability, prosperity and partnership, and people and the planet. Among its important goals are peace, national reconciliation, security, and good governance. Sustainability in all its forms is considered cross-cutting and will be mainstreamed into all aspects of the SDP implementation. The success of MSDP requires not only national endeavours but also the involvement and commitment of development partners and international organizations.

Human rights and inclusiveness are fundamental to the successful transformation of Myanmar into a democratic society. The Government has spared no effort in nurturing democratic norms and practices among all its citizens. These efforts include the promotion of the rule of law, good governance and protection of human rights, and the fostering of vibrant civil society. All these are essential for the emergence of a democratic federal Union in which the security and prosperity of all citizens are assured. It is a supremely challenging task, particularly for a fledgling democracy. However, Myanmar is strong in its resolution to build the democratic society to which our people aspire.

Resolving the issue in Rakhine is an important component of our democratic process.

Our government has consistently exerted all efforts to bring peace and development to Rakhine. Within weeks of the assumption of the responsibilities of the state, the Government set up the Central Committee for Implementation of Peace, Stability, and Development of Rakhine State in May 2016 under the chairmanship of the State Counsellor, Daw Aung San Suu Kyi. This was followed by the establishment of the Advisory Commission on Rakhine in September 2016, headed by the late Dr. Kofi Annan, former Secretary- General of the United Nations, to provide recommendations for bringing peace, stability, and development to Rakhine State.

I wish at this point to pay tribute to Dr. Kofi Annan who with his immense wisdom had provided us with recommendations in his desire for us to reach our goal of peace, prosperity, and security in Rakhine State.

Barely a month after the Advisory Commission was established, an extremist terrorist group, called AqaMul Mujahidin (later renamed the Arakan Rohingya Salvation Army - ARSA) launched attacks on three Border Police posts in Northern Rakhine State. The attacks were premeditated, well-organized and designed to invoke fear among the inhabitants, to incite violence and to attract international attention.

The Government, despite the attacks, continued with its efforts to seek sustainable solutions for Rakhine State. The Advisory Commission presented its final report to the Government of Myanmar in August 2017. It contains 88 recommendations towards achieving lasting peace and stability in Rakhine. We have set up an Implementation Committee, and I am happy to report that we are now implementing 81 out of 88 recommendations made by the Commission.

Within hours of the release of the Advisory Commission s final report, ARSA terrorists carried out simultaneous attacks on 30 police outposts and one army battalion headquarters. Here, it must be stressed that the ARSA attacks of 2017 were not only against the security forces but also against various communities inhabiting Rakhine State.

The attacks opened a chapter of fear and instability that led to a large outflow of refugees to Bangladesh. International attention has been focussed on the outflow overlooked the broader picture of the various reasons, immediate as well as longstanding, that brought about the displacement. Nevertheless, the Government has persisted in its sincere efforts to address as a whole, the need for stability, reconciliation, and development to all communities in Rakhine.

We sympathize deeply with these displaced persons especially women and children and have taken steps to effect the early repatriation of all displaced persons from Rakhine, who are verified as residents of the State.

The only way to resolve the issue swiftly and peacefully is through the implementation of the bilateral agreements, working together in the spirit of good neighbourliness, refraining from activities that might be inimical to the national interests of either Myanmar or Bangladesh.

We recognize the crucial role of the United Nations in addressing the issue of Rakhine and the present humanitarian crisis in particular. Accordingly, the Government of Myanmar signed a MoU with the UNDP and the UNHCR for assisting the speedy and efficient resettlement and rehabilitation of returnees. Under the MOU, the implementation process begins with an assessment that will be conducted by the UNDP and UNHCR in the potential project areas. The UN Team has started this process, and we are looking forward to their feedback.

The Myanmar government has expressed its serious concerns over the report published on 27 August 2018 by the Human Rights Council’s Fact Finding Mission on Myanmar. From the very beginning, Myanmar objected to the formation of the Fact-Finding Mission, due to our government s serious and genuine concerns about the advisability of its establishment, composition, and mandate. At a time when we are working hard to build harmony on the ground, we are concerned that the release of this report based on narratives and not on hard evidence will only serve to inflame tensions further and potentially hinder our efforts to create the much needed social cohesion in Rakhine State.

Here, I would like to stress what accountability should mean to all of us.

As you will also be aware, the government of Myanmar has resolutely rejected the ICCs ruling of 6 September 2018 in connection with Rakhine State. Our position here is clear: Myanmar is not a party to the Rome Statute, and the Court has no jurisdiction over Myanmar whatsoever. The ICC decision was made on dubious legal grounds and applied to a situation here domestic remedies have not yet been exhausted.

I speak to all Representatives here today when I say that we, the members of the international community, should be deeply concerned by the recent decision of the International Criminal Court and the various precedents that the Court may be setting by this recent ruling as well as by the way in which it was made. Such action can only erode the moral and legal authority of the Court. We are heartened that we are not alone in having grave misgiving about the ICC.

Please also let me make it clear, whilst the government is unable to accept this legally dubious intervention by the International Criminal Court, we are fully committed to ensuring accountability where there is evidence of human rights violations committed in Rakhine State. We have recently established an Independent Commission of Enquiry. The Commission will investigate all violations of human rights and atrocities committed in Rakhine State as part of our efforts to address the issues of accountability, reconciliation, peace, stability, and development in our country. The Independent Commission of Enquiry is chaired by Madame Rosario Manalo, Former Deputy Foreign Minister of the Philippines, and comprises Ambassador Kenzo Oshima, former Japanese PR to the UN and Under-Secretary- General of the UN, and two Myanmar nationals, one of whom is the former Chairman of the Constitutional Tribunal and the other a former Senior Officials of UNICEF.

We hope that, alongside the Rakhine Advisory Commission’s recommendations, the work of the Independent Commission of Enquiry will become an important guiding light for the resolution of long out reached problems in the Rakhine State.

The challenges facing Myanmar are complex and multifaceted. However, the people of Myanmar are resilient. We stand united to face all obstacles and to meet all challenges as we strive to bring peace, development and national harmony to our country that has suffered from decades of conflict, underdevelopment, and disharmony.

Myanmar Ambassador to United Nations (2001-10). Union Minister of the State Counsellor’s Office (since 2016).