Right to reply by the Latvian government

Following the publication on 18 September 2018 of the article by Manlio Dinucci « The new Iron Curtain », the Latvian government, via its embassy in Rome, addressed the following letter to the editors of Il Manifesto. Manlio Dinucci replied and Thierry Meyssan has replaced this exchange in its context. 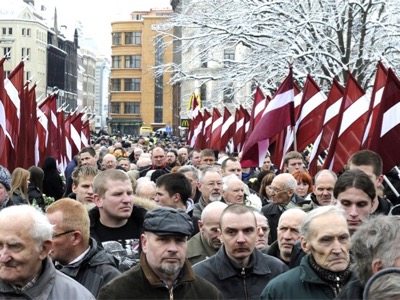 Legal demonstration in tribute to the Latvian SS.

Letter from the Latvian ambassador in Rome

I would like to refer to the article concerning Latvia entitled « The Art of War - Latvia, the new Iron Curtain » by Manlio Dinucci, published in Il Manifesto, edition of 18 September 2018 – and given the importance and inviolability of the freedom of opinion as a fundamental right, I consider it necessary to clarify certain aspects relative to the official position and information concerning Latvia.

In the first place, I refer to the paragraph in which it is affirmed : « […] Latvian President Raymond Vējonis, who, in April, had already approved the project for a law forbidding the teaching of Russian in Latvia, a country whose population is composed of almost 30 % of ethnic Russians, and where Russian is used as their main language by 40 % of its inhabitants ».

On the basis of the information presented in the Population Register of the Office of Citizenship and Migration Affairs (last updated on 1 July 2018), the percentage of persons of Russian ethnicity residing in Latvia is 25,82 %. On 2 April 2018, Latvian President Raimonds Vējonis proclaimed the amendments to the Law on Education and the Law on General Education, which introduced a gradual transition to a greater proportion of teaching in the national language.

I would also like to point out that the text of this reform contains no disposition for a law specifically forbidding the teaching of the Russian language in Latvia, as is mistakenly claimed in the article. The reform attempts to promote a consolidated society, and equal opportunities for all graduate students, by excluding all forms of discrimination. The main objective is to ensure that all graduates are able to master the Latvian language with equal efficiency, thus guaranteeing the same opportunities for entry into the working world and the pursuit of their studies.

At the same time, whether before or after the reform, the programmes for the instruction of national minorities will be maintained, and will continue to guarantee the protection and development of their language and cultural identity, as stipulated in the Constitution of the Republic of Latvia. The Latvian government will therefore continue to finance programmes for the instruction of national minorities in seven languages (Russian, Polish, Belarusian, Ukrainian, Estonian, Lithuanian, and Hebrew) in primary schools. In secondary schools, the government will continue to support teaching in the mother tongue for the pertinent subjects, such as the culture and history of national minorities. Public support for teaching in minority languages in Latvia will therefore once again exceed that of many other European countries.

The second argument, of which I would like to emphasise certain aspects, concerns the deployment of the Italian contingent in Latvia. The presence of Italian troops in Latvia is part of the NATO operation « Enhanced Forward Presence » conducted by Canada, which pursues its goal for the defence of the territories of the members of the Alliance.

The deployment of troops has a preventive and dissuasive objective, destined to prevent conflict and preserve peace. The demands of such an intervention are the consequence of certain concrete events such as the use of force by states which are not members of NATO. I am referring specifically to the illegal annexation of Crimea by Russia. This precedent makes absolutely legitimate the adoption of a preventive measure by the Alliance as a strictly defensive response, which is proportionate and in line with international obligations. The consensus concerning the presence of military personnel from the allied countries, along with other defensive measures, is a manifestation of the responsibility of a state to defend its own frontiers.

The visit by President Mattarella to Latvia and to the Italian contingent is the expression of the cooperation between Italy and Latvia in order to achieve their common objectives as NATO countries.

Thanking you for your precious attention, I express my availability for possible ulterior information, and take this opportunity to present my most cordial salutations.

We appreciate your attention to our work, and intend to answer the two questions that arise from it. We have noted your correction of the percentage of ethnic Russians in the Latvian population - « 25,82 % » instead of « almost 30 % ». Nevertheless, in a country where one quarter of the population is composed of ethnic Russians, the most common language, also used by numerous other citizens, is Russian, which is now banished by law from higher education and reduced in secondary schools.

The United Nations Committee on the Elimination of Racial Discrimination (CERD) declares itself to be « preoccupied by the reports on current linguistic policies, which in Latvia discriminate against ethnic minorities in the sectors of education and employment » (30 August 2018).

This same Committee raised another question which you do not mention - 11 % of inhabitants, particularly ethnic Russians, including those born in Latvia, have no status as citizens. These are « non-citizens » who, against the norms of the EU itself, find themselves « deprived of the right to vote, and discriminated against in the access to public services ». There is a vast wave of opposition in Latvia to such linguistic and social discrimination - the Saskaņa (Harmony) party, opposed to discrimination, once again won the political elections on 6 October.

Concerning the Italian contingent, which, according to you, is deployed by NATO in Latvia with a « preventive and dissuasive objective » that is to « defend the nation » against Russia, we shall have to remind you of facts which, after all, have already been amply documented. It is NATO which, since 1999, has been extending menacingly to the East, right on the edge of Russian territory. As from 2004, the ranks of the Atlantic Pact were swollen by all the countries which were once members, with the USSR, of the Warsaw Pact, later dissolved – NATO supported the aggression by Georgia against South Ossetia in 2008; and in 2014, it supported the demonstrations in the Ukraine by transforming them into a putsch, operated by neo-Nazi army formations who had been trained for that purpose. This fact caused the Russians of Crimea (a territory which is historically Russian, attributed by Moscow to the Ukraine in 1954 within the political frontiers of the USSR) to decide on its return to the Russian Federation by a regular referendum. By accusing Russia of « the illegal annexation of Crimea » by « the use of force », you create an image of the functional enemy for the USA/NATO escalation which is dragging Europe towards a dangerous confrontation similar to that of the Cold War.

I remain at your disposition for further clarifications.

Commentary for the Voltaire Network

Far from being a question of detail, the treatment by Latvia of its Russian minority constitutes the central point of NATO’s political action throughout Eastern Europe.

As soon as the independence of the Baltic states was proclaimed in 1990, the United States and NATO deployed the families of their agents with the stay-behind network, recruited at the end of the Second World War and exiled in the NATO zone. These were families raised in the cult of Nazism, and financed for half a century by the United States and the United Kingdom, either directly or with the intervention of Federal Germany.

These families spread the idea that the Soviets had never fought Nazism as an ideology, but had invaded Central and Eastern Europe in order to consolidate their Empire. These Nazi collaborators never adhered to the Hitlerian ideology, but were prepared to ally themselves with the Nazis in order to defend their country against Soviet imperialism. Thereafter, the crimes of the Soviet régime in Latvia would be of a different nature and a different amplitude from those it committed in other areas of the Soviet Union.

On this basis, we saw the development of groups claiming to be followers of Nazism, and which had a historic link with it, mostly in Latvia, Lithuania, Estonia and the Ukraine. As from 2005, and with the support of the President of Latvia, a Canadian naturalised Latvian, Vaira Vīķe-Freiberga, Nazi or neo-Nazi ceremonies were held publicly in Latvia, and the stay-behind ideology became official [1].

The current treatment of the Russian minority can only be understood in this context.

The new iron curtain
“The Art of War”

“On the Restoration of Independence of the Republic of Latvia”