Far from being a simple military exercise, the war game « Trident Juncture 2018 » aims at eradicating the ideal of neutrality and press-ganging the Nordic countries into the US crusade against Russia. The states which are participating either believe or will come to believe in the imaginary danger of the « Russian peril ». 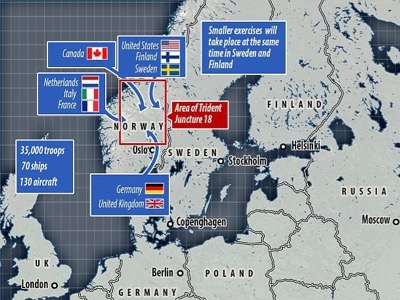 US Marines disembarked from convertibles and helicopters from the amphibious attack ship « Iwo Jima », and « secured » Keflavik airport in Island, where Poseidon P-8A aircraft had arrived from Sigonella to take part in the hunt for enemy submarines. That was the start, on 17 October, of the NATO exercise Trident Juncture 2018, whose principal phase will be taking place from 25 October to 7 November in Central and Eastern Norway, in the areas adjacent to the North Atlantic (as far as Iceland) and the Baltic Sea (including the airspace of Sweden and Finland).

The armed forces of the 29 member states of NATO will be taking part, plus those of their two partners, Sweden and Finland. Total deployment – approximately 50,000 men, 65 major ships, 250 aircraft, 10,000 tanks and other military vehicles. If they were lined up, one element behind the other, they would create a column 92 kilometres long. The commander of the exercise, one of the largest of the last few years, is Admiral James Foggo. Nominated by the Pentagon, like his predecessors, he is the commander of the Allied Joint Force Command (JFC) whose headquarters is in Lago Patria (Naples), the US Naval Forces in Europe, and the US Naval Forces for Africa, whose headquarters is in Naples Capodichino. The Admiral is commanding Trident Juncture 2018 from the « Mount Whitney », the flagship of the Sixth Fleet, transferred from Gaeta to the North Atlantic - a floating headquarters which is connected to the Pentagon’s global command and control network, including the Muos di Niscemi station in Sicily.

This confirms the importance of these US and NATO command centres and bases in Italy, not only for the Mediterranean, but also for the whole « area of responsibility » of the Supreme Allied Commander in Europe, who is always a US General, currently Curtis Scaparrotti, nominated by the President of the United States. Since 2002, this geostrategic area « has been extended in order to cover all NATO operations, independent of their geographical situation ».

The official objective of Trident Juncture 2018 is to « ensure that NATO forces are ready to respond to any form of aggression wherever it may occur ».

But it’s enough to glance at the map to realise that this major war exercise is focused in only one direction – towards the East, against Russia. Admiral Foggo claims that the « Fourth Battle of the Atlantic » has already begun, after the battles of the two World Wars against German U-boats, and that of the Cold War against Soviet submarines: it is now being waged against Russia, the new « aggressive maritime power », whose « increasingly sophisticated submarines threaten NATO’s capacity to maintain maritime control of the North Atlantic, and consequently, the lines of maritime communication between the United States and Europe ». Turning the facts on their head, the Admiral claims that Russia « defies the presence of the United States and NATO » not only in the Atlantic, but also in the « Baltic and the Black Seas », in other words the seas which border European Russia.

Thus we discover the other finality of Trident Juncture 2018 - it’s a massive psyop (psychological operation) aimed at reinforcing the idea that Europe is under the threat of an increasingly aggressive Russia. In Sweden, a NATO partner country, 4.8 million families were handed a survival manual explaining how to prepare for war, by storing reserves of food and other essential goods, learning how to behave when the signals of alert are sounded to warn of the Russian attack. So NATO is preparing to swallow up even Sweden, an old « neutral » state.