What is not being said about the quadrilateral summit on Syria

The quadrilateral summit in Istanbul on Syria has endorsed the political advances of Russia, but has decided nothing. Moscow gave its Turkish, French and German partners a lesson on the situation. The allies of Washington are having a hard time digesting their defeat and drawing its conclusions. 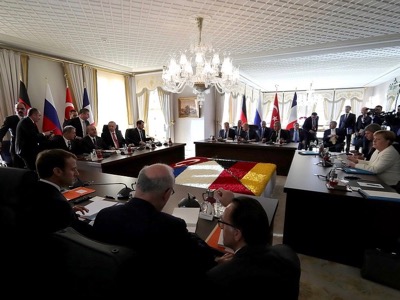 Since the Russo-US agreement of Helsinki last July, President Donald Trump has been trying to withdraw his troops from Syria, while the Pentagon insists on leaving them where they are in order to prevent Russia from being the only power to decide on the future of that country. However, the allies of Washington refuse to admit defeat.

The quadrilateral summit in Istanbul was intended to harmonise the points of view of Russia, Turkey, France and Germany. If we read the final communiqué [1], the entente seems perfect, but if we compare it with the Press of the countries concerned, nothing is so sure.

The subject of the disagreement, which is not even mentioned in the communiqué, is the Syrian Constitution, adopted by referendum in 2012.

After having thought about applying to Syria the federal model of ethnic Republics, Russia had to admit that the situation of Syria is completely different from its own. In Syria, the communities are not settled geographically. Moscow therefore has no intention of interfering in the debate.

From the Turkish point of view, it would seem to be a good idea to reiterate in Syria what was done in Cyprus. In 1974, the fake operation « Cyprus Peace Process » was labelled with the more explicit code name of « Operation Attila ». It was aimed at annexing the North of the island - with the consent of Henry Kissinger [2]. Today, « Operation Olive Branch » may permit the annexation of the North of Syria and therefore partially realise the « Oath of Atatürk » [3].

From the French point of view, Paris persists in fantasising about the « mandate » given by the League of Nations (1920) in application of the Sykes-Picot agreement (1915). Since decolonisation had begun at the end of the First World War, the League of Nations explained that the mandate was about ensuring a « period of transition » between de facto independence and true independence (sic). Using the same vocabulary. In New York, President François Hollande evoked the necessity of establishing a new « mandate » over Syria. His successor, Emmanuel Macron, assured that it was necessary to organise a « period of transition », without ever daring to try and explain between what and what.

At the end of the Second World War, the French « Colonial Party » (which was not a political party but a transpartite lobby group) would not accept decolonisation. Without the authorisation of the government in Paris, the French army bombed not only Syria in 1945 (in other words, after independence), but also Algeria (the massacres of Sétif, Guelma and Kherrata, 1945) and Indochina (the massacre of Haïphong, 1946).

Following this ideology, France also considered the creation of a « Kurdish national homeland » on the model set up by the British in Palestine.

Finally, from the German point of view, whatever the Constitution says, we have to get these Syrians migrating again (these people who had been displaced on the demand of NATO [4] and German big business), and send them back where they came from. From a strategic point of view, the operation which was intended to empty the country of its inhabitants did not lead to victory. From an economic point of view, it had not been possible to integrate the great majority of the migrants into the sector of heavy industry. German electors therefore reproached Chancellor Merkel with having forced them to carry the weight of social aid.

The Chancellory realised a little late [5] that, given the attraction of Germany for the countries of the South, the number of migrants would have been the same with or without the war, as long as Berlin announced that it would accept all foreigners who wished to emigrate.

[5] “How the European Union is manipulating the Syrian refugees”, by Thierry Meyssan, Translation Pete Kimberley, Voltaire Network, 2 May 2016.

Source : “What is not being said about the quadrilateral summit on Syria ”, by Thierry Meyssan, Translation Pete Kimberley, Voltaire Network, 30 October 2018, www.voltairenet.org/article203671.html

Source : “What is not being said about the quadrilateral summit on Syria ”, by Thierry Meyssan, Translation Pete Kimberley, Voltaire Network, 30 October 2018, www.voltairenet.org/article203671.html