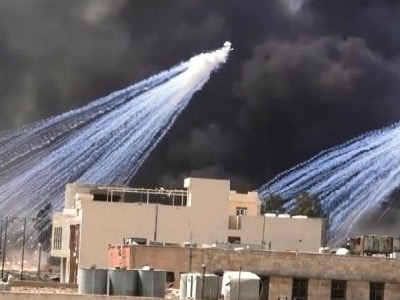 On instructions from my Government and further to our letters regarding the targeting of innocent Syrian civilians by the illegitimate “international coalition” led by the United States, I should like to convey to you the following:

The illegitimate “international coalition” led by the United States of America continues to commit crimes against innocent Syrian civilians. Over the past few days, coalition warplanes continued bombarding homes in the city of Hajin, Dayr al-Zawr Governorate, with internationally prohibited white phosphorus bombs. On 24 and 28 October 2018, the coalition fired missiles at homes in the village of Susah, Dayr al-Zawr Governorate. Dozens of civilians, the majority of whom were women and children, including an entire family (father, mother and two children), were killed and injured as a result of the above-mentioned crimes.

The coalition continues to commit crimes against humanity and war crimes against the Syrian people, employ internationally prohibited weapons, such as white phosphorus bombs, against Syrian civilians and violate the norms of international law, international humanitarian law and human rights instruments. Those actions confirm beyond any doubt that this illegitimate coalition is committing such crimes, which pose a serious threat to regional and international peace and security, in a deliberate and systematic manner.

The Syrian Arab Republic once again calls upon the Security Council to shoulder its responsibility of maintaining international peace and security. In addition to conducting an international investigation into those crimes, the Council must condemn them and take immediate action to stop them and prevent their recurrence. Moreover, the Security Council must put an end to the hostile and illegal presence in Syrian territory of United States forces and other foreign forces and stop them from continuing to support terrorism and using terrorists and separatist militias to achieve their aims and implement their hostile schemes to undermine the sovereignty of the Syrian Arab Republic and its territorial integrity.