The US mid-term elections have been interpreted by the major medias in terms of the partisan divide between Republicans and Democrats. However, continuing his in-depth analysis of the social fabric, Thierry Meyssan sees a clear retreat of the Puritans faced with the Lutherans and the Catholics. Donald Trump’s political realignment, just as that of Richard Nixon before him, is close to succeeding. 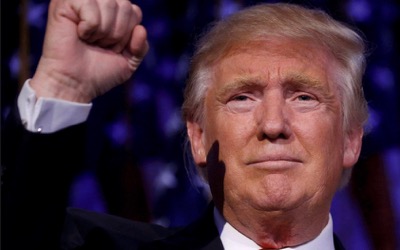 The Republican Party has lost the House of Representatives, but Donald Trump has imposed his ideas.

During the US mid-term elections, voters were asked to pronounce themselves collectively for the renewal of all members of the Federal House of Representatives and one third of the members of the Federal Senate. Besides that, at the local level, they nominated 36 governors with numerous other local responsibilities, and answered 55 referendums.

These elections are considered far less catalysing than the Presidential elections. US politologists take little notice of the voter turnout, since it is possible to participate only in certain elections and not others.

While since the end of the Cold War, the turnout for Presidential elections has been between 51 % and 61 % (with the exception of the vote for Bill Clinton’s second mandate, which interested only a minority of electors), the mid-term elections attract between 36 % and 41 % (with the exception of 2018, which apparently reached 49 %). So, from the point of view of citizen participation, the rules of the game are democratic – however, in practice they are anything but. If there were a quorum [1], the members of Congress elected would be few and far between. Representatives and Senators are usually chosen by less than 20 % of the population.

The researchers who analyse election results with a view to predicting the careers of the candidates do so through the lens of partisan differences. This time, the majority in the House of Representatives will be Democrat, and in the Senate, mostly Republican. This analysis makes it possible to anticipate how much elbow room the President will have when dealing with Congress. But in my opinion, it is of no use whatever in attempting to understand the evolution of US society.

During the Presidential campaign of 2016, an ex-Democrat, Donald Trump, presented himself as a candidate for the Republican Party. He represented a political current which had been absent from the US landscape since the resignation of Richard Nixon – the Jacksonians. A priori, he had no chance of obtaining the Republican investiture. Nonetheless, he eliminated his 17 rival candidates one by one, won the nomination, and then won the election in opposition to the opinion poll favourite, Hillary Clinton.

Andrew Jackson, whose portrait is shown on the 20 dollar bill, is the most controversial President of the United States.

The Jacksonians (from the name of President Andew Jackson, 1829-1837) are the defenders of popular democracy and individual freedom against both political and economic power. On the contrary, the dominant ideology of the time, both for the Democrat and the Republican Parties, was that of the Puritans - moral order and imperialism.

During this campaign, I observed that the powerful ascension of Donald Trump marked the resurgence of a fundamental conflict – on one side the descendants of the « Pilgrim Fathers » (the Puritans who founded the British colonies of America) and on the other, the descendants of the immigrants who fought for the independence of their country [2].

The first historical component of the United States (the Puritans) intended to create colonies based on a « pure » way of life (in the Calvinist meaning of the term) and to pursue England’s foreign policy. The second (the Anglicans, the Lutherans and the Catholics) were fleeing the misery of which they had been the victims in Europe, and hoped to better their situation by their own work.

These two groups found a consensus around their Constitution. The major landowners who drew up the fundamental laws explained exhaustively that they wanted to reproduce the political system of the English monarchy, but without creating an aristocracy [3]. However, the second group who added the Bill of Rights (the first ten amendments to the Constitution), wanted to pursue the « American dream » without running the risk of being crushed by some sort of « raison d’état ».

Over the last few years, the Democratic and Republican Parties have evolved to become the spokespersons of Puritan thought, defending moral order and imperialism. The Bushes are the direct descendants of the « Pilgrim Fathers ». Barack Obama composed his first cabinet by relying massively on the members of the Pilgrim’s Society (the transatlantic club presided by Queen Elizabeth II). Hillary Clinton was supported by 73 % of Judeo-Christians » [4] etc. On the contrary, Donald Trump represented, on his own, the other component of US political history. In no more than a few months, he managed to take control of the Republican Party and steer it towards his own convictions, at least in appearance.

Currently, approximately a third of the population of the United States has become violently polarised between pro- and anti-Trump factions, while the other two thirds, much more moderate, are holding back. Many observers consider that the country is now as divided as it was in the 1850’s, just before the civil war known as the « War of Secession ». Contrary to the myth, that conflict did not oppose a slave-owner South to an Abolitionist North, since at that time, both sides practised slavery. The war was more about economic policy, and opposed an agricultural Catholic South and an industrial Protestant North. During the War, both sides attempted to enrol slaves in their armies. The North was quickly ready to free them, while the South was waiting to seal its alliance with London. Historians have demonstrated that, from a cultural point of view, the conflict was a prolongation, in the United States, of the English civil war, known as the « Great Rebellion » (which opposed Lord Cromwell and Charles the First). However, unlike England, where the Puritans finally lost the war, it was their descendants who prevailed in the USA. 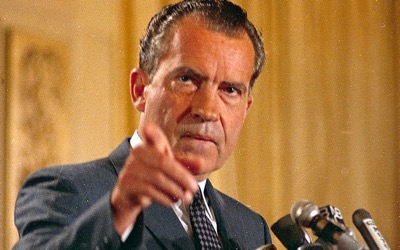 The methods of the criminal Richard Nixon have unfortunately made us forget his political successes.

It was this conflict that threatened to manifest again under Richard Nixon, and which today has become clear to all. It is not without note that the best historian on this question [5] is Kevin Phillips, the ex-electoral strategist who helped Nixon to gain the White House. Nixon rehabilitated the electors from the South, recognised the Peoples’ Republic of China, and ended the Vietnam war (which had been triggered by the Democrats). He entered into conflict with the Washington establishment, which forced him to resign (the Watergate affair).

Of course, it is possible to read the results of the mid-term elections according to the Republican / Democrat split, and conclude that the Democrats have managed a small breakthrough. But above all, they should be understood according to the Lutheran / Calvinist split.

In this case, we have to note that not only did President Trump participate intensively in the campaign, but so did his predecessor Obama. The objective was either to support the cultural realignment operated by Donald Trump, or to carry the majority in Congress in order to destitute him whatever the pretext. The result is clear - impeachment is impossible and Donald Trump has the support of a majority of the governors, which makes his reelection possible.

The new Democrat representatives are young, supporters of Bernie Sanders, and very hostile to the establishment of their party, particularly Hillary Clinton. Above all, among the Republican candidates, EVERY ONE of those that President Trump went out on the campaign trail to support were elected. Those who refused his help were beaten.

The losers of these elections – primarily the Press and Barack Obama – did not fail because they are Republicans or Democrats, but because they are Puritans. Contrary to the comments of the dominant medias, we are obliged to note that the United States are not in the process of tearing themselves to pieces, but in the process of reformation. If this trend continues, the medias will have to abandon their rhetoric of moral order, and the country should return sustainably to a policy of hegemony rather than imperialism. In the long term, the United States should be able to recover their Constitutional consensus.

[1] The quorum is the minimum number of participants required for an election to be valid. The countries that ask for a quorum before their elections based on universal suffrage generally fix this number at half of the electorate.

[3] How Democratic Is the American Constitution ?, Robert A. Dahl, Yale University Press, 2002.

[4] By « Judeo-Christians », I mean people who have based their lives on the Jewish scriptures (Old Testament) and the Christian scriptures (New Testament) without pointing out the contradictions between the two.

Source : “What the mid-term elections tell us about US interior conflict”, by Thierry Meyssan, Voltaire Network, 13 November 2018, www.voltairenet.org/article203865.html

Source : “What the mid-term elections tell us about US interior conflict”, by Thierry Meyssan, Voltaire Network, 13 November 2018, www.voltairenet.org/article203865.html