How did President Donald Trump react to the news that the Russian hypersonic nuclear missile Avangard was up and ready? He announced that his country would withdraw from the INF Treaty. So, instead of making a plan to catch up and quickly developing hypersonic missiles, he intends to reassemble the US medium range nuclear missile arsenal.
Valentin Vasilescu observes that the United States is no longer manufacturing motors for this type of missile and is using Russian motors for its Atlas V rockets. Conclusion: Moscow has gained yet another advantage over Washington. 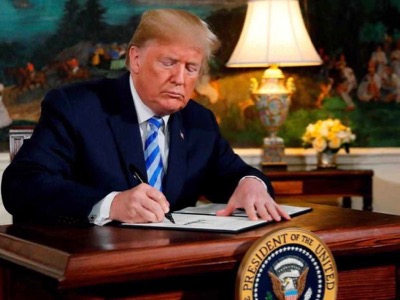 Executing their obligations under the INF Treaty of 1987, the USSR (then Russia) and the United States have destroyed all their ground-based nuclear missiles with a range between 500 and 5,500 km (short range, medium range and intermediate range). Missiles with a range greater than 5,500 km do not fall under this treaty. They are classified as ICBMs. Under the INF Treaty, the United States has not built nor been able to place its nuclear missiles in Europe. Thus the main beneficiaries of this treaty are European countries and Russia.

President Trump’s announcement to unilaterally withdraw the United States from the INF Treaty, does not seem to affect the United States. This is because the distance between the American continent and the European part of Russia is more than 5,500 km. Trump thought he could pull the wool over Vlady’s eyes at least with his anti-ballistic shields in Romania and Poland. These weapons were of the VLS MK-41 type. They are sourced from systems existing on the AEGIS cruisers of the Ticonderoga class. They can launch Tomahawk cruise missiles armed with miniaturized W80 nuclear ogives weighing 5-50 kt. But the US cruise missiles travel at a speed 20 times slower than the Russian ballistic missiles and from the moment they are launched, their thermal imprint can be traced by satellite.

This is why the Pentagon is seething. […] It now urgently needs a new type of ballistic missile to be lined up in Europe near the Russia border. The only challenge President Donald Trump has left out of consideration is that the United States no longer has the rocket motors needed to build such missiles. When NASA received substantial funding, the US army had motors for their most powerful missiles. But over the last 15 years, NASA has become a shadow of that entity which was the first to send men to the moon. Thus unintentionally, President Trump’s decision to withdraw the United States from the INF treaty, Trump, serves Vlady. We could go even further and say it is a great win for Russia.

Its motors must develop a propulsion of at least 75 000 to 100 000 kgf. In contrast the missiles that form part of the US anti-ballistic shields GBMD, SM-3 (1b, 2) and THAAD have a far weaker propulsion and are useless.

Due to cuts in NASA’s budget, most experts in the sections that belong to the special departments of Lockheed Martin and Boeing have come together and formed a company “United Launch Alliance” (ULA). This company buys rocket motors, assembles the components of the rockets, and creates new space vehicles that it then launches for the Pentagon and Nasa to use.

Thus ULA assembles the US’s most powerful US heavy rocket in service: Atlas V. This is the only one that can put in space an automatic military space ship (X-37B) and military satellites on the geostationary orbits. To launch, Atlas V uses 2 boosters with Russian RD – 180 motors. Atlas V’s first stage also has a Russian RD-180 motor, produced by NPO Energomash.

The only US capsule that has proved that it could reach the international space station was Dragon’s Space X. It was launched by Falcon 9. Falcon 9 is a two-staged light rocket:
The first stage is composed of nine Merlin 1C motors, each with a propulsion of 56 696 kgf.
The second stage consists of a one Merlin motor.

Falcon 9 is nothing more than recycled relics of the Cold War. The Merlin 1C motor is a variation of the famous RS-27 motor, produced by the company Rocketdyne from 1974 for the old Delta 2000 rockets of McDonnell Douglas, abandoned by NASA. Several Merlin 1C motors can be used to build new nuclear missiles with short and medium range missiles.

Taurus I and Minotaur I are the new “light” rockets with 3 or 4 stages that Orbital Sciences Corp (OSC) has provided to Nasa. They can satellize a cosmic object weighing 580 - 1 500 kg using the stages SR19 and M55A1 coming from LGM-118A, MX-Peacekeeper and LGM-30F Minuteman II, US intercontinental ballistic missiles with solid combustibles. The Minotaur I rocket consists of the first and second stage of the intercontinental ballistic rocket Minuteman II (developing both 120 000 kgf).

In the period 2010-2013, OSC replaced the first two stages of the Minotaur I rocket motor NK-33 (140 000 kfg). The NK-33 motors, delivered by the Russian company Energomaș, are superior to those manufactured in the United States. Due to sanctions that the United States imposed on Russia in early 2014, the transfer of Russian technology (including technology from Energomas), was interrupted.

The company Aerojet in collaboration with the designing office of Youzhnoye at Dnipropetrovsk-Ukraine has begun to produce motors: AJ-26-58/62. These are poor copies of the NK-33 U. […] The Antares rocket transporting the US cargo Cygnus with supplies for the international space station (ISS) exploded 6 seconds after launch due to a fault in the design of the AJ-26 motor.

There is a similar rocket, with a US SR19 stage (used by Taurus 1 and Minotaur I). It is composed of the fixed system GBMD (Ground-Based Midcourse Defense) and is assembled by the OSC. GBMD (35 000 kgf) belongs to the Pentagon’s Agency for anti-ballistic defence that operates in the bases of Fort Greely (Alaska) and Vandenberg (California). This shows that because the US is focusing so hard on creating antimissile shield, the budgetary cuts have resulted in a smaller pot of funds available for the design of new high power rocket motors. This means that NASA must use heavy missiles.

Let us see where Russia stands on this issue of the rocket motors which could be used for medium range and intermediate range nuclear missiles.

Angara 1.1: a light (2 tonnes) rocket which can satellize on the low orbit;

Angara A3: a medium (14.6 tonnes) rocket that can be placed on the Earth’s low orbit;

Angara A7: a superweight rocket which has an RD-193 motor (motor more powerful than the RD-191 motor), permitting the placement of 35 t on the earth’s low orbit.

Angara-1000: the most powerful rocket in the family, capable of satellizing 100 t on a low orbit.

Conclusion: Apart from Angara A7, Russia can use only one motor for the Angara rocket. This is the RD-191. Therefore for the Russia to build and render operational in 6 – 8 months a new nuclear ballistic missile with a range up to 5 000 km is a catastrophe for the US. Yet Romania and Poland are in a far more regrettable situation. This is because US anti-ballistic shields have been placed on their territory. Till now, the time you had to correct an error in accidental launch of an IBCM was 20 to 25 minutes. This represents the time it takes for an IBCM to travel from Russia to the American continent. However now, you have just 4 minutes (20% of the time you had before). This represents the time it takes for the IBCM to travel from Russia to Poland or Russia to Romania, a distance of around 1 000 km. From now on, Romania and Poland will become targets for 8 Mt ogives of Russian ballistic missiles, ogives that the US Shields will not be able to neutralize, and which have an enormous capacity to destroy the population and infrastructures.