The destroyers of Libya are now « for Libya »

After Emmanuel Macron’s failure to solve the Libyan crisis, it’s now Giuseppe Conte’s turn to take a shot at it. It’s true that Rome is better placed than Paris, insofar as it enjoys the support of the White House. However, there is little chance that any progress of any sort will be made, since these « fairy godmothers » are in fact the big bad wolves who recently devoured Libya. 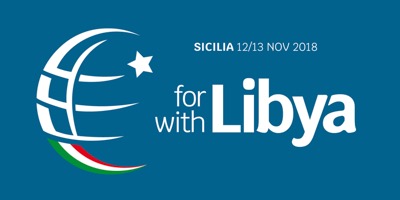 A crescent moon (a symbol of Islamism) designed like a stylised hemisphere which, flanked by a star and the words “for/with Libya”, represents a world which « wants to be on Libya’s side » - this is the logo of the « Conference for Libya » organised by the Italian government, a fact illustrated by the three-coloured flag in the lower section of the crescent moon/hemisphere.

The International Conference is taking place on 12-13 November in Palermo, on the island of Sicily, which only seven years ago was the principal base from which NATO, under US command, launched its war to demolish the State of Libya. The war was prepared by financing and arming certain tribal sectors and Islamist groups in Libya which were hostile to the government of Tripoli, and by infiltrating special forces into the country, among whom were thousands of Qatari commandos camouflaged as « Libyan rebels ». Then, in March 2011, the US and NATO aero-naval attack was launched – it lasted seven months. The aviation flew 30,000 missions, of which 10,000 were attack missions, and used more than 40,000 bombs and missiles.

By the will of a vast political group stretching from left to right, Italy also took part in the war, not only by deploying its aviation and its navy, but also by offering the USA and NATO the use of seven air bases - Trapani, Sigonella, Pantelleria, Gioia del Colle, Amendola, Decimomannu and Aviano.

With this war in 2011, NATO demolished the State of Libya, situated on the Southern shore of the Mediterraean facing Italy, a State which had achieved – admittedly with certain notable internal disparities - « high levels of economic growth and human development » (as the World Bank itself declared in 2010), « superior to that of the other African countries ». The proof of this is that almost two million immigrants, most of them Africans, had found work in Libya. At the same time, using its own sovereign treasury, Libya had made possible the development in Africa of independent economic organisations and an African currency.

As the emails from Secretary of State Hillary Clinton prove, the USA and France came to an agreement to block, at whatever the cost, Kadhafi’s plan to create an African currency, an alternative to the dollar and the CFA Franc imposed by France on 14 African ex-colonies.

After the demolition of the State and the murder of Mouamar Kadhafi, in the chaotic situation which followed, a vicious fight began, both internal and international, to share out the loot - the enormous oil and natural gas reserves; the immense underground Nubian reserves of fossil water; this white gold, in perspective more valuable than the black gold; the Libyan territory itself, of primary geostrategic importance; the sovereign treasure, approximately 150 billion dollars invested overseas by the Libyan State, and « frozen » in 2011 in the most important European and US banks, or in other words – stolen. For example, of the 16 billion Euros of Libyan wealth blocked by the Euroclear Bank in Belgium and Luxembourg, more than 10 billion have disappeared. « Since 2013 », according to the RTBF (RadioTelevision Francophone Belge - « hundreds of millions of Euros, taken from this treasure, were sent to Libya to finance the civil war which triggered a serious migrant crisis ».

Many African immigrants in Libya were imprisoned and tortured by Islamic militias. Now in the hands of traffickers and international manipulators, Libya became the main land of transit for a chaotic migratory flood, which, each year in the Mediterranean caused more victims than NATO bombs in 2011.

We can not keep silent, as even the organisers of the counter-summit in Palermo did – the truth is that at the origins of this human tragedy are the wars waged by the USA and NATO which, seven years ago, demolished an entire State in Africa.