The Aim of the Global Pact on Migration

While seven states have already refused to sign the Global Pact on Migration, (which it is claimed was drafted in their interests), Thierry Meyssan revisits the history of this document and the philosophy which inspired its authors. The two strands of thought that thread this document together are the philosophies of Karl Popper and states releasing all control of their borders. 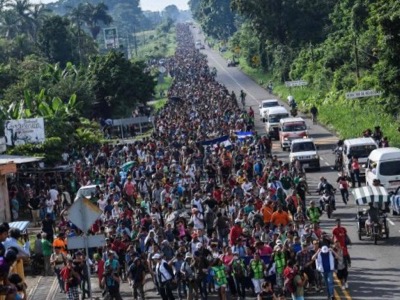 One of the migrant caravans recruited and organized by Pueblo sin fronteras, one of George Soros’s NGOs

On the occasion of the conference held at Marrakesh celebrating the 70th anniversary of the Universal Declaration of Human Rights, UN member states will have to vote on the Global Pact for Safe, Orderly and Regular Migration.

According to the Special Representative of the Secretary General (Louise Arbour), the aim of this Pact is to facilitate the movement of workers from poor countries to rich countries.

“The demographic data indicate that if [the rich countries] want to maintain their current economic levels or to grow their economy, they will have to accept well trained foreign workers to respond to the demands of the labour market”.

So declared Louise Arbour. According to the UN press service, it’s about “regulating migration so that it works for the whole world”.

Germany was the first state to implement this policy. In 2015, she welcomed more than a million migrants, some of whom were coming from Syria [1]. But two years later, Germany has still not managed to integrate them. The popular discontent with this massive flow of migrants induced the German Federal Chancellor, Angie, to announce her intention to quit politics.

At present, the seven “rich” States - Austria, Croatia, Hungary, Lithuania, the Czech Republic, Slovakia and Switzerland - reject the initiative of the UN Secretary General. Others, notably Belgium, Bulgaria and Italy, could also be on the verge of rejecting it.

According to the Austrian Chancellor Sebastian Kurz – whose country represented the European Union in the negotiations held in New York, but is now opposed to the text – the philosophy that underlies this Pact is removing distinctions between different types of migrants (legal v. illegal; humanitarian v. political). As a consequence, the Pact will have immediate repercussions on social rights, both in the territory of the Host State and in the countries that decide to lead immigrants to the border.

This pact has its origins in Appendix 2 of the New York Declaration for Refugees and Migrants, drafted under the leadership of Peter Sutherland [2].

On 21 June 2012, this high ranking personality, Peter Sutherland, participated in a hearing in the UK House of Lords and declared that every individual must be endowed with the opportunity to study and work in the country of his choice – something that is incompatible with any policy regulating immigration – and that migrations creates the crucial dynamic for economic development, despite what the Host States might say about it. Consequently, concluded Sutherland, “the European Union must undermine the homogeneity of the nations that are part of it” [3].

The Global Pact for Safe Orderly and Regulated Migration does not provide any measure that bind States or measures that directly limit their sovereignty. This derives from the method dear to the disciples of Karl Popper, the thinker of an “open society” and “without borders”: to declare rights (not in the sense of “positive rights” but “the option to acquire positive rights”). The rights are optional in the sense that they can be asserted through judicial appeals and then will be imposed on the national legislations. This is the strategy that the NGO Pueblo sin fronteras (funded by the speculator George Soros) is applying. It is organizing caravans of migrants from Central America to the United States.

The Pact’s philosophy also favours the use of migrants as a weapon of war [4]. Nato already tested this out to unleash war in Kosovo, to deprive Syria of its defences or to prepare a military intervention against Venezuela.

Sutherland, who died at the beginning of this year, was himself a former director of the Nato thinktank, the Bilderberg Club.

This strategy has been validated by another one of George Soros’s NGOs: the International Crisis Group, whose President is Louise Arbour.

Today we witness a coming and going: Westerners are sending arms to the regions that they destruct and in exchange welcome the refugees that are forced to flee their homes [5].

[1] “The phoney « refugee crisis »”, “How the European Union is manipulating the Syrian refugees”, by Thierry Meyssan, Translation Pete Kimberley, Voltaire Network, 7 September 2015 and 2 May 2016.