Like Germany, Japan has recovered the right to hold a genuine army. But, in contrast to Berlin, which lacks modest plans, Tokyo has gradually built up specific military equipment and modern weapons that allow it to project itself as a military power, anywhere in the world. 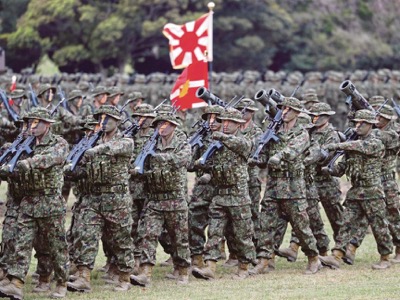 When the Second World War was over, Japan was prohibited from having military weapons (airplane carriers, long range bombers, missiles whether cruise or ballistic) which would allow any further attacks.

Today, Japan’s military navy has 20 submarines for attack, 39 for destruction (8 of these are equipped with the AEGIS combat system) and 3 helicopter carriers.

However, the Japanese government has decided to equip itself with an airplane carrier. The Japanese aircraft carrier will play a defensive role, neutralizing an imminent threat. But once it is operational, no-one is going to be able to stop Japan from playing an enemy role and becoming an offensive force.

Japan’s negotiations with the US demonstrate that Japan wishes to replace its 107 old planes (F-4 and F-15) with the new Generation V-a F-35A. Japan also wants 40 F-35B. This is the version of the F-35 with vertical take off and landing destined for the military navy.

Japan already has two new destroyers, helicopter carriers of the class “Izumo”. Each weighs 27 000 tonnes and is 248 m long. The ships are equipped with an anti-submarine system and anti-ship system. Each ship has the capacity to carry on board 400 of the navy’s infantry.

In order to provide an expeditionary unit, ready to intervene anywhere in the world, similar to that of the US, all Japan needed was a navy. This need was satisfied in April 2018, with the establishment of the military brigade ARDB, with its military base at Sasebo, near Nagasaki.

Japan’s neighbours, China, North Korea and Russia, all have nuclear weapons. Japan has an antidote against airplane carriers and ships for disembarking. But Japan is totally exposed to an attack with ballistic missiles, especially if it was with a nuclear attack. The American guarantees relating linked to anti – ballistic defence, are not sufficient.

Japan’s decision to use weapons to self-empower is not surprising. It is easy to implement this decision with the advanced technology that Japan now has at its disposition. But the person who deserves most of the credit in transforming Japan into a strong offensive force (that is nuclear) is Donald Trump whose adage can be liberally interpreted: “Make (enemies of) America great again".

Source : “The Japanese Army is now as strong as it was in the Second World War”, by Valentin Vasilescu, Translation Anoosha Boralessa, Voltaire Network, 21 December 2018, www.voltairenet.org/article204444.html

Source : “The Japanese Army is now as strong as it was in the Second World War”, by Valentin Vasilescu, Translation Anoosha Boralessa, Voltaire Network, 21 December 2018, www.voltairenet.org/article204444.html