Faced with the risk of nuclear war, Italy plays the Three Little Monkeys 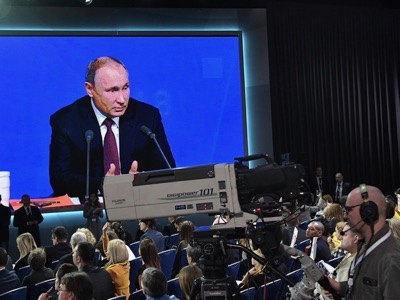 What was the reaction to the warning by Russian President Putin when he said that the world underestimates the peril of of nuclear war, and that this tendency is increasing?

The commentary in the La Repubblica is significant, speaking of his “highly alarming tone”. The almost absolute silence of the whole Parliamentarian arc is also eloquent. As if Italy had nothing to do with the race to stock up nuclear weapons which, warned Putin in his end-of-year Press conference, could lead to the “destruction of all civilisation or even the whole planet” [1]. The scenario is not alarmist, but a realistic assessment by scientists who study the effects of nuclear weapons.

A specific danger – emphasises Putin – is the “tendency to lower the bar for the use of nuclear weapons, by creating tactical low-impact nuclear charges which may lead to a world-wide nuclear disaster”. This is the category including the new B61-12 nuclear bombs which the USA will begin to deploy in Italy, Germany, Belgium, Holland, and perhaps in other European countries, during the first half of the year 2020. “High precision and the possibility of using less destructive warheads” - warns the Federation of American Scientists – “may lead military commanders to insist on the use of nuclear bombs in an attack, knowing that radioactive fallout and collateral damage would be limited”.

Italy shares the responsibility for the growing danger of nuclear war, since, in violation of the Non-Proliferation Treaty and not being a signatory of the UNO Treaty forbidding nuclear weapons, it is providing the United States with a primarily anti-Russian capacity, not only with its bases, but also aircraft and pilots for the deployment of nuclear bombs. This comes with the explicit or implicit consent (by renouncing real opposition) of the entire arc of Parliament.

The other danger – warns Putin – is the “disintegration of the international system for arms control”, initiated by the retreat of the United States from the ABM Treaty (Anti Ballistic Missile Treaty) in 2002. Created in 1972 by the USA and the USSR, it forbade each of the two parties to deploy interceptor missiles which, by neutralising reprisals by countries under attack, would have favoured a « first strike », in other words a surprise nuclear attack. Since then, the United States have developed the “anti-missile shield”, stretching from Europe to the borders of Russia – two ground installations in Romania and Poland, and four warships cruising the Baltic and the Black Sea. Equipped with launch tubes, these ships are able to launch interceptor missiles and also cruise missiles with nuclear warheads.

Italy shares the responsibility in this case also – the installation of the JTAGS (Joint Tactical Ground Station) at Sigonella (Sicily). This a US satellite station for the “anti-missile shield”, one of five on the planet. The situation is made worse by the fact that the USA now want to retire from the 1987 INF Treaty (Intermediate-Range Nuclear Forces Treaty) - which eliminated the US nuclear missiles based in Comiso - in order to be able to deploy in Europe anti-Russian ground-based intermediate-range nuclear missiles. The Italian government is also implicated, since it endorsed this plan at the North Atlantic Council of 4 December, and is without a doubt favourable to the installation of these missiles in Italy. “If these missiles arrive in Europe, the West should not be astonished if we react” said Putin. A warning which was ignored by Conte, Di Maio and Salvini who continue to beat the drum for the anti-migrant “Security Decree”. But when US nuclear bombs and missiles arrive and put the real security of Italy in danger, they see nothing, hear nothing and say nothing.