The « great game » of military bases in Africa

Created in 2007 on the findings of an Israëli study, AfriCom (US Command for Africa) has never yet managed to install its headquarters on the continent. This structure carries out anti-terrorist operations from Germany, with the support of France in the region of the Sahel. In return, US and French transnational companies conserve a privileged access to African prime materials. 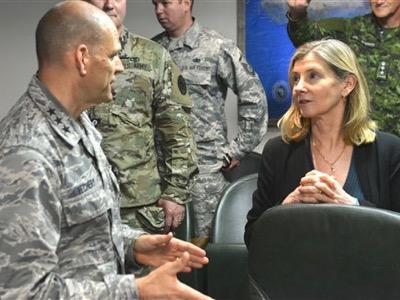 In June 2018, Nancy Lindborg, director of the US Institute of Peace (USIP), visited the headquarters of AfriCom in Stuttgart. The USIP is the equivalent of the NED for the Department of Defense. It develops « humanitarian » actions just like the NED promotes « democracy ». Obviously, this is not a philanthropic foundation by the Pentagon, but a tool for its Intelligence services.

Italian soldiers on mission in Djibouti have offered sewing machines to the humanitarian organisation which aids the refugees in this tiny country in the Horn of Africa. It is situated in a strategic position on the most important commercial Asia-Europe route, at the mouth of the Red Sea, facing Yemen. Italy has a military base there, which, since 2012, « supplies logistical support for Italian military operations located in the area of the Horn of Africa, the Gulf of Aden, the Somali Basin and the Indian Ocean ».

So in Djibouti, then, it would seem that the Italian military are not dealing exclusively with sewing machines.

In the exercise Barracuda 2018, which took place last November, chosen sharp-shooters from the Special Forces (whose headquarters are in Pisa) underwent training in all sorts of environmental conditions, including night operations, with the most sophisticated high-precision rifles which can centre the target at a distance of one or two kilometres. We do not know in which operations the Special Forces participated, since their missions are kept secret – however it is certain that they took place essentially in a multinational context under US command.

In Djibouti is situated Camp Lemonnier, the huge US base from which the Horn of Africa Joint Task Force has been operating since 2001. The Task Force is composed of 4,000 specialists in top secret missions, including targeted assassinations by commandos or killer drones, particularly in Yemen and Somalia. While aircraft and helicopters for these special operations take off from Camp Lemonnier, the drones have been concentrated at Chabelley airport, a dozen kilometres from the capital. New hangars are being built there, and the work has been handed by the Pentagon to a company from Catania which is already employed for the work taking place in Sigonella, the main drones base used by the USA and NATO for operations in Africa and the Greater Middle East.

There is also a Japanese and a French base in Djibouti, which house German and Spanish troops. A Chinese military base was added in 2017, the only one outside of its national territory. Apart from certain basic logistical functions, such as the housing of the crews of the military vessels that escort merchant ships, and warehouses for the storage of supplies, it represents a significant signal of the growing Chinese presence in Africa.

This is an essentially economic presence, to which the United States and other Western powers oppose a growing military presence. This accounts for the intensification of operations led by AfriCom (US Command for Africa), which has two important subordinate Commands in Italy - the US Army Africa, at the Ederle de Vicence barracks ; the US Naval Forces Europe-Africa, whose headquarters is at the Capodichino base in Naples, composed of the warships of the Sixth Fleet based in Gaeta.

In the same strategic infrastructure is another US base for armed drones, which is under construction in Agadez, Niger, where the Pentagon already uses air base 101 in Niamey for drones. This base serves for military operations that the USA has been leading for years, with France in the Sahel, especially in Mali, Niger and Chad. President Giuseppe Conte will be visiting the last two bases as from tomorrow.

These countries are amongst the poorest in the world, but very rich in prime materials - coltan, uranium, gold, oil and many others - exploited by transnational companies based in the USA and in France, who are increasingly afraid of the competition from Chinese companies who offer African countries much more favourable conditions.

The attempt to halt the Chinese economic advance by military means, in Africa and elsewhere, is beginning to fail. Probably even the sewing machines, donated to Djibouti by Italian soldiers for the refugees, are « made in China ».

Italy: the US Springboard for Africa
“The Art of War”