Venezuela, a putsch by the US deep state

Finally, President Trump has aligned himself with the ambitions of the US deep state for the destruction of the Caribbean Basin. He has confirmed Vice-President Mike Pence and Senator Marco Rubio in their operation to destabilise Venezuela. He may also support the same two men in their project for Israël and against Syria. 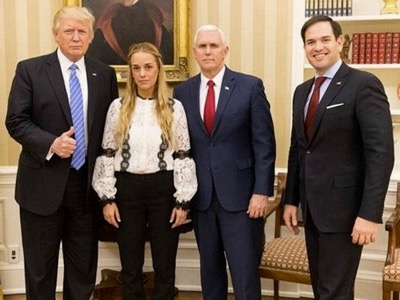 Almost a year ago, President Trump received Vice-President Mike Pence and Senator Marco Rubio at the White House. They had come to present to him the wife of one of the leaders of the Venezuelan opposition. At that time, he was opposed to any act of destabilisation. Today, the same Pence and Rubio have obtained his green light.

The announcement by President Trump, which recognises Juan Guaidó as the « legitimate President » of Venezuela, was prepared in an underground control room within the Congress and the White House.

This was described in detail by the New York Times [1]. The principal operator, Republican Senator for Florida Marco Rubio, « virtual Secretary of State for Latin America, will lead and articulate the strategy of the Administration in the region », in liaison with Vice-President Mike Pence and National Security Advisor John Bolton.

On 22 January, at the White House, the three men presented their plan to the President, who accepted it. Immediately afterwards - reports the New York Times - « Mr. Pence called Mr. Guaidó and told him that the United States would back him up if he claimed the presidency ».

Vice-President Pence then broadcast a video message to Venezuela in which he called on the demonstrators to « let your voices be heard tomorrow » and assured « in the name of President Trump and the American People - estamos con ustedes (we are with you) as long as democracy has not been restored », and defined Maduro as a « dictator who never won the presidency in free elections ».

The following day, Trump officially crowned Guaidó « President of Venezuela », although he had not participated in the presidential elections of May 2018. The elections were boycotted by the opposition, which knew it would lose, and consequently handed the victory to Maduro under the surveillance of numerous international observers.

This back-stage gossip reveals that political decisions in the USA, before anything else, are taken by the « deep state », the underground centre of real power, which is in the possession of the economic, financial and military oligarchies. These are the people who have decided to overthrow the Venezuelan state. Apart from its huge reserves of precious minerals, Venezuela owns the most expansive oil reserves in the world, estimated at more than 300 billion barrels, six times more than the United States.

In order to struggle free from the strait-jacket of sanctions, which go as far as preventing Venezuela from receiving the dollars they have earned by selling petrol to the USA, Caracas has decided to quote the sale price of petrol no longer in US dollars, but in Chinese yuans. This is a manœuvre which threatens the exorbitant power of the petrodollars, and it is for this reason that the US oligarchies have decided to speed up the overthrow of the Venezuelan state and get their hands on its oil wealth. They need it immediately, not as a source of energy for the USA, but as a strategic instrument for controlling the world energy market, mainly countering Russia and China.

To this effect, sanctions and sabotage have been used to artificially deteriorate the penury of basic necessities in Venezuela in order to stoke popular miscontent. Simultaneously, the penetration of US « non-governmental organisations »has been intensified – for example, in the space of one year, the National Endowment for Democracy has financed more than 40 projects in Venezuela on the « defence of Human Rights and Democracy », each of them costing tens or hundreds of thousands of dollars.

Since the government continues to enjoy the support of the majority, some large-scale provocation is almost certainly in preparation, aimed at triggering a civil war on the interior and opening the way for intervention from the exterior. With the complicity of the European Union, which, after having blocked Venezuelan public funds in Belgium - a value of 1.2 billion dollars - sent Caracas an ultimatum (with the agreement of the Italian government) to hold new elections. They would be under the control of Federica Mogherini, the same person who last year refused Maduro’s invitation to go to Venezuela and moniter the presidential elections.