While several Latin American states and US Special Forces seem to be preparing to attack Venezuela, Valentin Vasilescu examines the balance of power and topography. According to him, no form of invasion can defeat this vast country defended by a jungle, much larger than in Vietnam. Any intervention can only aim to destabilize the country, not to overthrow its government. 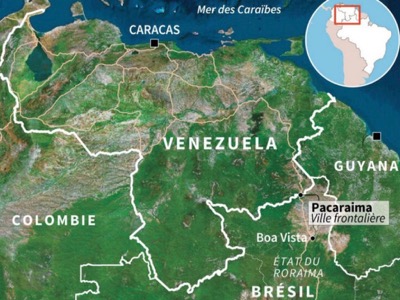 Scenario of the South American War

The foreign invasion of Venezuela is only possible by Brazil, Colombia and Guyana, three neighboring states of Venezuela. Theoretically, there are at least three axes of invasion.

Colombia has Kfir, A-37 and A-29 Tucano aircrafts that have no chance against the Buk-M2, S-125, S-300 and Venezuelan F-16 and Su-30 aircrafts. The same is true for Brazilian planes in the face of medium and long range air defense and against Venezuelan aviation.

Because of their low ceiling, the Tucano A-29 turboprop aircrafts are constantly evolving within the reach of the 5,000 Venezuelan portable anti-aircraft missiles SA-24 (Igla-S).

A land invasion from Guyana is unlikely. This small country has neither the abilities nor the physical capacity: there is no road through the river and the delta of the Orinoco, nor the possibility of moving tanks through the jungle. Brazil is the least likely to succeed.

Because before coming into contact with the main Venezuelan forces, the Brazilian army must also travel 500 km in the jungle.

Then, the Orinoco River is a very difficult obstacle for Brazilians who do not have mobile bridges or other engineering equipments.

In regarding, the air defense of land forces, Brazil and Colombia have only portable missiles for a ceiling of 5,000 m, while the Venezuelan Su-30 launch laser-guided bombs KAB-500 and KAB-1500 or Kh-29 missiles with an altitude of 10,000 m

The most likely axis for the offensive is Colombia. However, the relief does not favor the Colombian offensive, the direction of the offensive stopping at Lake Maracaibo. It must be bypassed to the east in following a corridor from 15 to 20 km, easily defended by the Venezuelan army.

The best option would be to open a bypass with the Colombian air base equivalent to a brigade, and to parachute to the South-East by the Andean Cordillera. But this option is also impossible because Colombia has 5 C-130s and 8 C-295s, with which only 2 or 3 infantry companies can be parachuted.

Colombia also has a much lower combat force than Venezuela because it relies on infantry with light armor; in addition, it does not have tanks, its artillery is scattered and towed by trucks. In comparison, Venezuela has 2S19 Msta self-propelled artillery tanks, BM-30 Smerch tanks, BM-21 Grad, LAR and T-72.

A Brazilian maritime expedition of the 1st Marine Infantry Brigade aboard helicopter carriers and landing ships may complicate the situation of the defenders of Venezuela. Venezuela can attack the group of landing ships on 100 to 200 km of coast with Kh-31A1 and Kh-59ME anti-ship missiles launched by Su-30s.

The scenario of an US invasion

Only a US military invasion can overthrow Nicolas Maduro, as was the case in Iraq and Libya. But in the meantime, Russia has changed its foreign policy and has demonstrated in Syria that it is able to defend its allies. Due to the high economic interest in Venezuela, Russia and China, even if they will not send troops, will provide them with high-level and wide-ranging types of weapons to prevent a US invasion.

The United States is the largest naval power in the world and has two naval infantry corps. This is why the main offensive axis could be opened by a US landing. The sinking of 1 to 2 aircraft carriers and several US amphibious landing ships means the impossibil-ity of obtaining air supremacy and reduced chances of creating a naval infantry beachhead on the Venezuelan coast.

This goal is easily achieved with the 1,000 mile long Zircon hypersonic missile and the 1,400 km Kalibr 3M-54 cruise missile. If Venezuela had these missiles, it could hit the US group of expeditionary ships south of the Bahamas, 500 km from Miami. However, I do not think Russia would deliver Zircon and Kalibr missiles to Venezuelans. It could, however, offer Bastion systems and air-to-air missiles Kh-59MK2, with a range of 550 km, usable on Su-30 aircraft.

A Bastion-equipped Russian missile-borne missile battery uses four P-800 Oniks mobile missile launchers. The missile has a mass of 3 tons, a wingspan of 1.7 m and a powerful warhead of 250 kg. The propulsion is carried out by a ramjet cruise engine (supersonic ramjet), similar to that of the Zircon missile. The range of the P-800 missile is 350 to 600 km, its speed is Mach 2.5 (700 m/s). On the trajectory, at the cruising ceiling of 14,000 m, the missile is guided by satellite. Near the target, the P-800 attaches to the target, de-scends to a height of up to 10 m and performs change of direction maneuvers.

In this situation, Venezuela would be able to cope with the US Expeditionary Force group located south of the islands of Haiti and Puerto Rico. The likely accuracy gap of the Oniks P-800 missile is 1.5 m, which means that the target is 100% hit in the case of an aircraft carrier, a helicopter carrier, a cruiser or destroyer, all longer than 100 m.

The only possibility is a coordinated bombing of NATO (USA, France, Netherlands, United Kingdom) and Latin American States (Brazil, Colombia, Guyana) on targeted targets. In this case, it would not be an invasion, but the destruction of some Venezuelan structures.