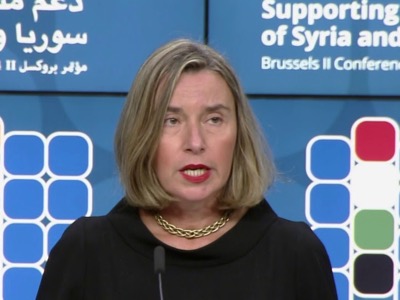 1. At the second Brussels Conference on "Supporting the Future of Syria and the Region" on 24-25 April 2018, the international community and the governments of refugee hosting countries came together to reaffirm their commitments in helping millions of affected civilians in Syria, as well as Syrian refugees and the communities generously hosting them.

US$6 billion (€5.0 billion) in grants was contributed by donors for the year 2018 for Syria and countries in the region most affected by the Syrian crisis (Jordan, Lebanon, Turkey, Iraq and Egypt), exceeding by 38% the original pledges of US$ 4.3 billion (€3.5 billion).

4. Nine months after the Brussels II conference, 30 of the 36 grant donors that made pledges had met or exceeded their pledge for 2018. Some donors are still to make information on their contributions available.

5. EU Member States and EU institutions pledged US$3.0 billion (€2.5 billion or 70% of the 2018 pledge in the Brussels II conference). They contributed US$4.7 billion in 2018, 56% more than their original pledges. The three largest donors were Germany, EU institutions and the UK, accounting for 65% of total grants.

6. The Syria Humanitarian Response Plan and the Syria Regional Refugee and Resilience Plan were covered 65% and 52%, respectively. The co-chairs urge donors to step up their efforts and to renew their financial commitments in support of the continued delivery of life-saving, protection and resilience support in the region in 2019 and beyond, wherever possible on a multiannual basis.

7. The purpose of this tracking mechanism is to inform on funding spent in the region and to ensure donors’ accountability in delivering against the pledges made at the Brussels II conference.

Almost one year after the Brussels II conference, the EU will host and co-chair with the UN the third Brussels Conference on the Future of Syria and the Region on 12-14 March 2019. The aim of the conference is to maintain international engagement and encourage further support for the Syrian population, for refugees in the region and for their host communities through humanitarian assistance and economic recovery in the region. The Conference will send a strong message of the international community to express support for the Syrian-led, Syrian-owned political process facilitated by the UN in line with UNSCR 2254 and the Geneva communiqué.