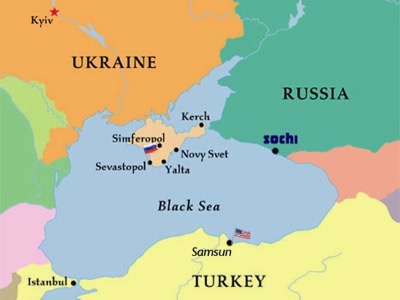 We have taken note of the Declaration on the Autonomous Republic of Crimea and the city of Sevastopol made on behalf of the EU by High Representative of the European Union for Foreign Affairs and Security Policy Federica Mogherini on March 17 [1], on the occasion of the fifth anniversary of the reunification of Crimea and Sevastopol with Russia, the subsequent remarks she made on the sidelines of the EU Foreign Affairs Council meeting in Brussels, as well as the Statement by the North Atlantic Council on Crimea made on March 18 [2].

It is notable that these statements largely consist of identical formulas. It appears that the EU and NATO prefer to shut their eyes when it comes to reality and only reprint their previous statements on Crimea each and every year.

Five years ago, the residents of Crimea and Sevastopol made a landmark decision at a democratic referendum: to put the historical record straight and to return to their home, the Russian Federation. By casting the ballot for their future and the future of their children, the Crimeans have shown the world what a real, not fake democracy is like. Much has been accomplished since then, and much is still underway to complete the integration of the Crimean Peninsula into the common political, socioeconomic and legal framework of Russia. Everyone who has visited Crimea and Sevastopol, including prominent public figures from the West, can see the achievements of the peninsular on this path.

The problem concerning the power supply has been settled through the construction of high-capacity heat and power stations. The transportation link to mainland Russia has been ensured through the record fast construction of the Crimean Bridge, which opened to the automobile traffic last year and will open for trains by the end of 2019. Passenger traffic has increased following the construction of a new terminal at Simferopol International Airport. The Tavrida federal route is being built. Efforts are being taken to settle the problem of running water to the region. With this aim in view, 100 km of new water pipes have been laid and the construction of multiple water channels to replenish the North Crimean Canal following its disconnection from water sources by Ukraine will be finished by 2020. The development of social facilities, including schools, kindergartens and hospitals, is proceeding apace.

But all of this is of little interest to the EU and NATO. A fresh attempt has been made to score political points from the November 2018 incident in the Kerch Strait, which was provoked by Ukraine. The other day the EU adopted a shocking decision to add several Russian citizens to its illegitimate sanctions list, including several border guard officers who helped cut short the provocation staged by the Ukrainian security service. By expressing support for the Ukrainian version of the event, the EU and NATO are only fostering the militarist sentiments in Kiev and supporting those who are resolved to continue this confrontation. The same is true about allegations of the “increasing militarisation of the peninsula” and obstacles to the “free passage of all ships through the Kerch Strait to and from the Azov Sea.” It appears that they have forgotten the numerous explanations we have provided regarding this at various levels.

We would like to remind everyone that it is NATO that is actively militarising the Black Sea region, increasing its military presence in Eastern Europe and modernising the military and civilian infrastructure there. US BMD systems have been deployed in Romania. The patrolling of the sea and airspace as well as intelligence activities are becoming more intensive in the region, primarily on the Russian border. In 2018, the aggregate length of the deployment of warships in the NATO naval groups in the Black Sea was increased from 80 to 120 days. The Alliance makes no secret of its plans to strengthen its military presence in the region.

The EU and NATO continue to repeat allegations about the deterioration of the situation concerning human rights in Crimea, in particular, the violation of the rights of Crimean Tatars. They brush aside the fact that Russian Crimea is becoming ever stronger as a unique alloy of cultures and traditions of various ethnic groups. The federal and regional authorities are working consistently to implement the cultural, language, religious and other constitutional rights of the minorities, including the rights of Crimean Tatars and ethnic Ukrainians. The Crimeans can freely exercise all these rights. Following Crimea’s reunification with Russia, the Russian, Ukrainian and Crimean Tatar languages have all been declared state languages on the peninsula. There are conditions in place for learning these languages at schools and universities.

The allegation that “Russian citizenship and conscription in the armed forces of the Russian Federation have been imposed on Crimean residents” is evidence of total failure to understand the Crimeans’ sentiments. The allegation regarding “the environmental situation, which has considerably worsened” looks like a failing attempt to invent negative examples of life in Crimea.

It is not surprising therefore that the EU and NATO prefer not to see the actions taken by the Kiev government and Ukrainian nationalists to shut Crimea off from water and electricity supplies. More and more attempts are being made to “punish” the Crimeans for their choice and to invent indiscriminate restrictive measures that run contrary to international law and violate the Crimeans’ rights. One such measure is the visa discrimination of the Crimeans, which contradicts not only the basic international standards in the field of human rights, but also a number of fundamental documents of the European Union itself. Moreover, having seen the failure of the sanctions against Russia, the EU continues to urge the UN member states to go down this road again by imposing illegitimate unilateral restrictive measures against Russia.

We would like to recommend the EU and NATO to stop this politicking and to listen at long last to the voice of the Crimeans themselves. It is time that they recognised the democratic choice of the people of Crimea and Sevastopol and took notice of the positive changes in their life in the Russian Federation, just as many unbiased members of the Western public and political community have already done. The anniversary of Crimea’s reunification with Russia is a good occasion to do this.

[1] “Declaration by the EU on the Autonomous Republic of Crimea and the city of Sevastopol”, Voltaire Network, 17 March 2019.