Massimo D’Alema entered into history by leading his country, Italy, into NATO’s criminal war against ex-Yugoslavia. At that time, the world had become unipolar, and no-one in the West was worried about violating international law and launching a war against the decision of the Security Council. The same D’Alema is working today to create a Greater Albania which includes what is currently Kosovo. 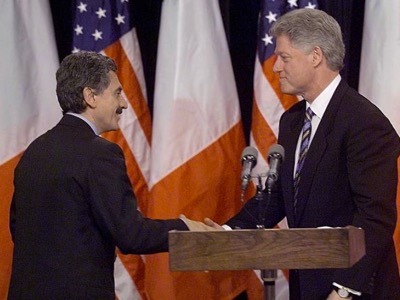 On 24 March 1999, the session of the Italian Senate re-opened at 8.35 p.m. with a communication by the honourable Sergio Mattarella, who was then Vice-President of the D’Alema government (Ulivo, PdCI, Udeur) - « Honourable senators, we have been informed by the Press agencies that NATO operations began at 6.45 p.m. »

At that moment, the bombs launched by the F-16’s of the US 31st Squadron, which had taken off from Aviano (Frioul), had already hit Pristina and Belgrade. New waves of US and Allied fighter-bombers were arriving from other Italian bases.

In this way, and in violation of the Constitution (articles 11, 78 and 87), Italy was dragged into a war about which the government informed Parliament only after the Press agencies had published the news, once the war had already begun.

Twenty days before the attack against Yugoslavia - as he himself related in an interview with Il Reformista (24 March 2009) - Massimo d’Alema had been called to Washington, where President Clinton made this proposition: « Italy is so close to the theatre of war that we will not ask you to participate in the military operations, but only to make your bases available to us ».

D’Alema had arrogantly replied - « We will assume our responsibilities at the same level as the other countries of the Alliance », meaning that Italy would not only make its bases available for the war against Yugoslavia, but also its fighter-bombers. So 54 Italian aircraft did indeed participate in the bombing, attacking the targets indicated by the US command.

« Morally, it was the right decision, and also the way to fully assume our rôle », explained D’Alema in the interview. « In terms of the number of aircraft, we were second only to the USA. Italy is great nation, and we should not be surprised by our engagement in this war, » he declared in June 1999, in his rôle as President of the Council, pointing out that for the pilots, this had been « a great human and professional experience. ».

Italy thus played a primary rôle in the war against Yugoslavia. Taking off from Italian bases was the major part of the 1,100 aircraft which, in the space of 78 days, carried out 38,000 sorties, dropping 23,000 bombs and missiles (many of them bearing depleted uranium) on Serbia and what is currently Kosovo.

These missions served to activate and test the entire system of the US and NATO bases in Italy, preparing its reinforcement for the coming wars. The next war on the list was that against Libya in 2011.

While the war against Yugoslavia was still on-going, the D’Alema government took part in Washington at the NATO summit of 23-25 April 1999, which rendered operational the New Strategic Concept. NATO was transformed into an alliance which engaged its members to « carry out operations of riposte to the crises which are not provided for in article 5, outside the territory of the Alliance ».

That was the beginning of NATO’s expansion towards the East. In twenty years, after having demolished the Yugoslavian Federation, NATO increased from 16 to 29 States (30 if it also now incorporates Macedonia), spreading closer and closer to the borders of Russia.

Today, the « North Atlantic area » stretches to the mountains of Afghanistan, and Italian soldiers are present there, confirming what D’Alema defined with pride as the « new status as a great nation », earned by Italy twenty years ago by participating in the destruction of a country which had neither attacked nor even threatened Italy or its allies.

The war against Yugoslavia will be one of the themes of the International Symposium on the occasion of the 70th anniversary of NATO.

The theme « Yugoslavia - 20 years on - the founding war of the new NATO » will be presented, with video documentation, at the International Symposium « NATO’s 70th anniversary – what is the historical record? Exit from the war system, now », which will be taking place on 7 April in Florence (Cinema Teatro Odeon, Piazza Strozzi, 10.15 a.m. - 6 p.m.). Among the other themes will be « Europe in the front line of a nuclear confrontation. »

Organisers: Comitato No Guerra No Nato and Global Research, with Pax Christi, Comboniani, WILPF and other associations. In order to participate in the Symposium (no entrance fee), please communicate your name and place of residence to G. Padovano: [email protected]