Joint Statement by Iran, Russia and Turkey on the International Meeting on Syria 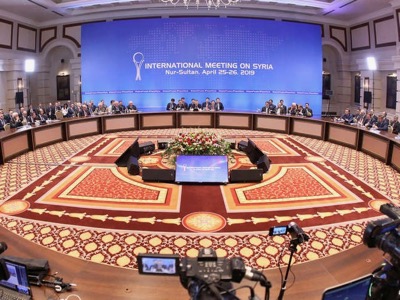 The Islamic Republic of Iran, the Russian Federation and the Republic of Turkey as guarantors of the Astana format:

1. Reaffirmed their strong commitment to the sovereignty, independence, unity and territorial integrity of the Syrian Arab Republic and to the purposes and principles of the UN Charter;

2. Highlighted that these principles should be universally respected and that no actions, no matter by whom they were undertaken, should undermine them. In this regard they strongly condemned the decision of the US Administration to recognize Israel`s sovereignty over the occupied Syrian Golan Heights, which constitutes a grave violation of international law, particularly the UN Security Council resolution 497, and threatens peace and security in the Middle East;

3. Rejected all attempts to create new realities on the ground under the pretext of combating terrorism and expressed their determination to stand against separatist agendas aimed at undermining the sovereignty and territorial integrity of Syria as well as the national security of neighboring countries;

4. Agreed to continue their consultations on the situation in the north-east of Syria and emphasized in this regard that security and stability in this region can only be achieved on the basis of respect for the sovereignty and territorial integrity of the country;

5. Reviewed in detail the situation in the Idlib de-escalation area, welcomed steps taken in order to implement the Memorandum of 17 September 2018 and reaffirmed the determination to fully implement the agreements on stabilization in Idlib, including the coordinated patrols and effective functioning of the Joint Iranian-Russian-Turkish Coordination Center. They expressed serious concern with the attempts of the terrorist organization “Hayat Tahrir al-Sham” to increase its control over the area and reaffirmed the determination to continue cooperation in order to ultimately eliminate DAESH/ISIL, Al-Nusra Front and all other individuals, groups, undertakings and entities associated with Al-Qaeda or DAESH/ISIL, and other terrorist groups, as designated by the UN Security Council. They also agreed to take concrete steps to reduce violations in the Idlib de-escalation area;

6. Expressed their conviction that there could be no military solution to the Syrian conflict and reaffirmed their commitment to advancing the Syrian-led and Syrian‑owned, UN-facilitated political process in line with the UN Security Council resolution 2254;

7. Held detailed consultations on the trilateral basis as well as with the United Nations Secretary-General’s Special Envoy for Syria Geir O. Pedersen in order to speed up work aimed at launching the Constitutional Committee as soon as possible, in accordance with the decisions of the Syrian National Dialogue Congress in Sochi, decided to hold next round of such consultations in Geneva and reiterated their full readiness to contribute to the Special Envoy`s efforts, including effective dialogue with the Syrian parties;

8. Welcomed the successful operations on mutual release of detainees in November 2018, February and April 2019 within the framework of efforts of the respective Working Group. These operations constituted unique and important contribution of the Astana format to building confidence between the Syrian parties and creating necessary conditions for advancing the political process. They reiterated their determination to advance further efforts of the Working Group;

10. Highlighted the need to create conditions and facilitate safe and voluntary return of refugees and internally displaced persons (IDPs) to their original places of residence in Syria, ensuring their right to return and right to be supported. In this regard they called upon the international community to provide appropriate contributions. They reaffirmed their readiness to continue interaction with all relevant parties, including the Office of the United Nations High Commissioner for Refugees (UNHCR) and other specialized international agencies;

11. Discussed the issue of increasing the number of observers of the Astana format and agreed on the invitation of Syria`s neighbouring countries – Iraq and Lebanon, - to join the Astana format;

12. Paid tribute to the contribution of the first President of the Republic of Kazakhstan, His Excellency Nursultan Nazarbayev to the launch and successful work of the Astana format;

13. Expressed their sincere gratitude to the Kazakh authorities for hosting in Nur-Sultan the 12th International Meeting on Syria in the Astana format;

14. Decided to hold the next International Meeting on Syria in the Astana format in Nur-Sultan in July 2019.