The US locomotive of world military spending

Every month of last year, according to the Stockholm International Peace Research Institute (SIPRI), the federal government of the United States spent $250 per citizen. 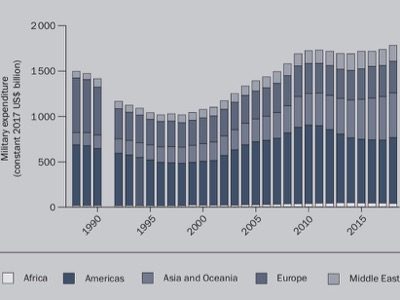 World military expenditure – according to the estimations by SIPRI, on 29 April [1] – exceeded 1,800 billion dollars in 2018, with a real-term increase of 76 % as compared with 1998. According to this estimation, the world spends approximately 3,5 million dollars every minute on weapons and armies.

The Intelligence Community, composed of 17 agencies (the most widely known of which is the CIA), declares a budget of 81.5 billion dollars, which, however, is only the tip of the iceberg of its real expenditure for secret missions.

The Department of National Security spent 70 billion dollars in 2018, above all to « protect our financial infrastructure and our most important leaders with our secret services ».

The Department of Energy spent 14 billion dollars, which corresponds to half of its budget, for the maintenance and modernisation of the US nuclear arsenal.

Taking into account these posts and a few others, United States military spending rose, in 2018, to approximately 1,000 billion dollars. In annual spending pro capite, that is the equivalent of 3,000 (three thousand) dollars per citizen of the United States. Military spending is the main cause of the federal deficit, which has climbed to 1,000 billion, and is increasing rapidly. Together with other factors, it is swelling the US public debt, which has climbed in 2019 to more than 22,000 billions of dollars, with annual interests of 390 billion which will double in 2025.

The system stands on the hegemony of the dollar, whose value is determined not by the real economic capacity of the United States, but by the fact that it is the main money of the currency reserves and the international costs of prime materials. This allows the Federal Reserve to print thousands of billions of dollars with which it finances the colossal US public debt through financial obligations and other titles issued by the Treasury.

China, Russia and other countries are questioning the hegemony of the dollar – and with it the economic and political order dominated by the West. The United States are more and more frequently playing the war card, by investing 25% of their federal budget in the most costly war machine in the world. 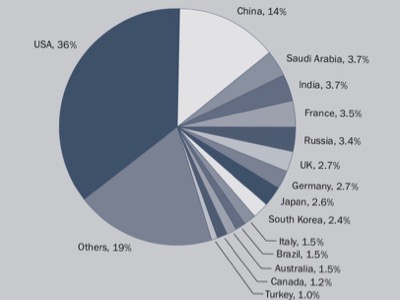 The military expenditure of the United States has a driving effect on that of other countries, which still remain at very inferior levels. China’s spending is estimated by the SIPRI at 250 billion dollars in 2018, even though the official figure provided by Beijing is 175. Russia’s spending is estimated at 61 billion, ten times less than that of the USA (counting only the budget of the Pentagon). According to the same estimates, seven NATO countries - USA, France, Great Britain, Germany, Italy, Canada and Turkey - count in total for approximately half of the world’s military expenditure.

This mean that in one year, we are already spending (according to the forecasts) the equivalent of four years worth of ’citizen income’ for military affairs. In the wake of the USA, a large future increase has been decided. The largest « ’citizen income’ » is now dedicated to war.