Before the war, Syrian society was organised in a secular manner, in order to allow cohabitation between the many religious groups which compose it. All Syrians have suffered from the atrocities committed by the jihadists (for which the Europeans today blame the Syrian Arab Republic). Many of the victims turned to God. Religious practice has risen from approximately 20 % to 80 %. The Christian community faithful to Rome has mostly emigrated, while the Orthodox Christians have stayed. Sunni Muslims are now even more strongly in the majority. Paradoxically, some of their Imams, forgetting the rhetoric of Daesh and ignoring the resistance of the country, today define secularists as their enemies. 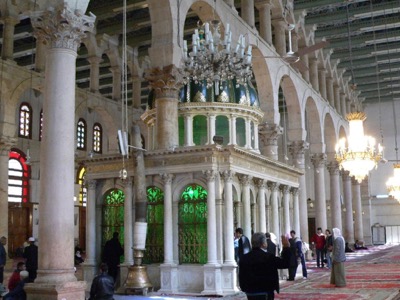 A centre for Jewish, Christian, and Muslim pilgrimages, the mausoleum of John the Baptist in the Umayyad Mosque, or the Great Mosque of Damascus.

Sunni General Hassan Turkmani had imagined defending Syria by counting on its inhabitants [1]. According to him, it was possible to take care of one another and to involve each community, with its own particular cultural relations, in the defence of the country.

This was just a theory, but we have been able to verify that it was correct. Syria has survived assaults by the most massive coalition in human History, just as during the Roman era, it survived the Punic Wars.

Those who still hope to destroy Syria have now understood that they will first have to crush its religious mosaic. So they vilify the minorities and encourage certain elements of the majority community to impose their cult on others.

It so happens that Syria has a long history of collaboration between religions. In the 3rd century, Queen Septimia Zenobia, who revolted against the Western tyranny of the Roman Empire and took over the leadership of the Arabs of Arabia, Egypt and all of the Levant, made Palmyra its capital [3]. She took care to develop the arts, but also to protect all the religious communities.

In France, during the 16th century, we experienced the terrible wars of religion between two branches of Christianity - Catholicism and Protestantism. This situation ended when philosopher Montaigne managed to imagine interpersonal relations, which allowed everyone to live in peace.

The Syrian project, as described by Hassan Turkmani, goes even further. It is not a question of simply tolerating that others, who believe in the same God, choose to celebrate Him in a different way. It’s about praying with them. So, every day, the head of John the Baptist was venerated in the Umayyad mosque by Jews, Christians and Muslims [4]. It is the only mosque where Muslims have prayed together with a Pope - Jean-Paul II - around their common relics.

In Europe, after the suffering of the two World Wars, priests of the different religions preached that we should fear God here on Earth, and that we would be rewarded in the Beyond [5]. Religious practices have evolved, but the hearts of Mankind have weakened. In fact, God did not send his prophets to threaten us. Thirty years later, the young generation, who wanted to free themselves from these restrictions, suddenly rejected the very idea of religion. Secularism, [6], which was a method of government designed to allow us to live together in the respect of our differences, became a weapon against these differences.

Let’s not commit the same mistake.

The role of religion is not to impose the dictatorship of a way of life, which is what Daesh tried, nor to terrorise our consciences, as the Europeans had tried in the past.

The role of the state is not to arbitrate theological disputes, and even less to choose between religions. As in the West, political parties have aged badly in the Arab world, but as soon as they were created, the Syrian Social Nationalist Party (SSNP) [7] and the Ba’ath Party [8] intended to found a secular state, in other words, one which guarantees, to everyone equally, the freedom celebrate his own cult without fear. That is Syria.

[1] General Hassan Turkmani (1935-2012) was the Chief of Staff, then Minister of Defence. He directed the National Security Council, which was destroyed by the huge NATO attack of 18 July 2012 in Damascus. He drew up the plans for the defence of Syria.

[2] Carthage (located today in Tunisia) was a colony of Tyre (presently in Lebanon). After the destruction of Carthage and the genocide of all its inhabitants, Hannibal took refuge in Damascus. Rome followed him there and threatened to destroy this city too. Finally, Hannibal surrendered, and a treaty of non-proliferation was signed. Syria no longer had the right to raise elephants as weapons of war, and Roman inspectors were allowed to visit the country in order to verify that the treaty was being respected.

[3] Palmyra was a prosperous capital, situated on the Silk Road which connected the Chinese capital of Xi’an with the Mediterranean ports of Tyre and Antioch. The destruction and the ceremony of capital executions by Daesh in the antique Theatre of Palmyra were a reference to this prestigious past.

[4] In most Muslim cultures, the mosques are reserved for the faithful of this religion. This was never the case in Syria, where the centres of the cults of all religions are open to all.

[5] The belief that the Good will be received by virgins in Paradise is based on the Coran. But it is a misunderstanding. It was not written in modern Arabic, but in an older language containing many Aramaic expressions.

[6] French Secularism is a method of government which was progressively installed by the Kings of France, who demanded to be consecrated by the Catholic church, but refused to allow the church to interfere in their reign. In the 16th century, Henri IV reunited Protestants and Catholics under his Catholic authority (which Louis 14th contested). The General Assembly of 1789 attempted to create a Catholic church which would be less dependent on Rome. But the secret « brief » of Pope Pius VI requested that the bishops revoke the Declaration of the Rights of Man and of the Citizen for which they had voted. This was followed by new atrocities, including the War in the Vendée. It was only after the divine right of Kings had been overthrown that it became possible to proclaim the separation of church and state, in the 20th century, in conformity with the political project of the Kings of France. Today secularism is used back-to-front by the adversaries of religion or by the adversaries of Islam.

[7] The Syrian Social Nationalist Party (SSNP) was founded in 1932 by five people, including the Christian Antoun Saade and the father of our ex-Vice President, Prince Issa el-Ayoubi, in order to unify Greater Syria, divided by European colonisation. This very progressive party immediately began campaigning for the equality of the sexes. During its struggle against the French Empire, the party fell under the influence of the British. Israëli propaganda claimed that the SSNP was an extreme-right organisation, which is absolutely false. Today, many intellectuals from Cyprus, Iraq, Jordan, Kuwaït, Lebanon, Palestine and Syria have spent some time with the SSNP, but did not stay. The party itself has split into several political formations.

[8] The Arab Socialist Ba’ath Party was founded in 1947, led by the Christian Michel Aflak. It differs from the SSNP by wanting not only to reconstitute Greater Syria, but also to unify all the regions of Arab culture. Every Arab country has its own Ba’ath party, federated with the Syrian Ba’ath. The Iraqi Ba’ath party took its independence with Saddam Hussein. In the 1980’s, the Iraqi Ba’ath rejected secularism, supported the Muslim Brotherhood, and preached a « return to the Faith ». This movement contaminated other Ba’ath parties, some of whose leaders began ostentatiously wearing beards and veiling their women.