What does Avigdor Lieberman know?

For seven months now, and probably for the next five months, Avigdor Lieberman has been directing the decisions of the Israëli ruling class. Considered a racist by the international Press, he is in reality a pragmatic and reasonable nationalist, as opposed to the « Greater Israël » project as he is to that of the binational State. He could become an asset for Moscow. 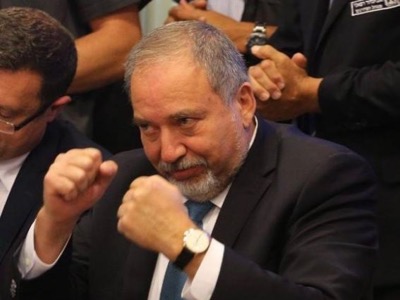 The resignation, on 14 November 2018, of Avigdor Lieberman, Minister for Defence of Benjamin Netanyahu’s government, triggered a major political crisis in Israël. Legislative elections were held in advance, but they were not enough to unite a new majority in the Knesset (Parliament). Since no government was formed within five weeks, new legislative elections were planned for 17 September.

Lieberman’s resignation occurred when Netanyahu imposed an agreement with Qatar which implied a cease-fire with Hamas and the direct management of the salaries of Gazan civil servants by the Qatari Emir.

Nobody at the international level reacted to what looked like the secession of Gaza from the Palestinian Territories and its pure and simple annexation by Qatar. For Lieberman, this meant the organisation of a Muslim Brotherhood dictatorship at the gates of his country. Many people had interpreted this event as a preliminary to the « Deal of the Century » put forward by Jared Kushner and Donald Trump. However, it appears today that the United States had planned to put Gaza under the control of Egypt, not Qatar.

Progressively, during his electoral campaign, Avigdor Liberman deployed a new argument concerning the refusal to exempt students in the yeshivas from military service – this is the refusal to obey a Halakhic order, coercion and religious privileges. This is not a new theme, but it had never played a central role strong enough to prevent Benjamin Netanyahu from forming a new government.

Lieberman became known as an immigrant from Transnistria, which united Russian-speaking Jews by creating, in 1999, a secular political party, Israel Beytenou (« Israël, our home »). More than one million Soviet citizens emigrated after the Jackson-Vanik amendment (1974) which threatened to isolate the USSR economically if it refused to allow the Jews to leave for Israël. These Russian-speaking citizens are legally Jewish, (they all have a Jewish grandparent), but are not necessarily Jews in the religious sense (meaning they have a Jewish mother). Lieberman’s initiative was financed by an Ouzbeki oligarch, Michael Cherney, who was at that time close to Boris Eltsine.

Until then, Liberman was known as an employee of the Likud, of which he was the general director – he became the Chief of Staff for Prime Minister Netanyahu, but did not seek any elective function. This ex-night club bouncer speaks loudly, with a pronounced Russian accent. He never misses an occasion to sneer at and threaten his interlocutors… before doing business with them.

In October 2003, Michael Cherney financed an unusual meeting at the King David hotel in Jerusalem [1]. It was designed to gather Russian-speaking Israëli politicians, including Lieberman, with US disciples of the philosopher Leo Strauss (generally speaking, ex-collaborators of one of the co-authors of the Jackson-Vanik amendment) and with their « Christian » allies (as opposed to Communist atheists) in the United States. To do so, he was clearly afforded the support of the Bush Jr. administration, which had no intention of allowing this minority to gravitate to the orbit of the new master of the Kremlin, Vladimir Putin. The entire Israëli right wing of that time, starting with Benjamin Netanyahu, took part in this meeting.

The conference developed a credo - theopolitics - which has since become widely-used in certain circles. Peace is possible in the world, but only if it is centred in Israël. A world government would prevent any new war. Its headquarters would be in Jerusalem. This is the line held by Jacques Attali in France.

At that time, Avigdor Lieberman had no problem with religious people as long as they shared or supported his Israëli nationalism. For example, he allied with the Tkuma party. He was also unafraid of the mixture of political and religious ideas. His Straussian friends (the disciples of Leo Strauss [2] who had worked for a time with Senator Jackson) claimed unashamedly that the Nazi episode had revealed the weakness of the democracies, and that in order to prevent a new Shoah, Jews would have to construct a new dictatorship. His Christian friends had imagined at the Pentagon [3] an alliance of all Jews and all Christians, the « Judeo-Christians » [4] to lead the battle against Communist atheism.

His ideas are known. He has never changed his mind. According to him, it is necessary to know where one’s loyalty lies. The Palestinians are divided between Palestinian nationalists and Islamist nationalists (the latter are fighting not for the Palestinian state, but for the Ummah). They are unable to live together, and will be even more unable to live with the European Jews (if we admit that Russia is European). They are two different people. In the name of realism, Lieberman therefore opposes the UNO plan for a binational state, and even considers it impossible to maintain the Israëli nationality of those « 1948 Arabs » who contest the existence of Israël.

He has often been called a racist, because of the aggressive manner with which he expresses himself. So, in 2001, he spoke about the possibility of bombing the Aswan dam in order to subdue Egypt. Or, in 2003, he declared that he was prepared to drive a bus full of Palestinian prisoners to drown them in the Dead Sea, etc. But these declarations are more a result of his « loud mouth » and not his ideology. In the same way, in 2004, he qualified President Mahmoud Abbas as a « terrorist diplomat » but, in 2008, it was Benjamin Netanyahu whom he described as a « liar, a cheat and a scoundrel ».

In reality, during his ministerial functions, Lieberman nominated many senior civil servants of Ethiopian, Bedouin and Druze origins. He simply declares that citizenship implies loyalty to the state. A left-wing personality, like the ex-Chief of Staff of the Air Force, General Eitan Ben Eliyahu, assures that he is in no way an extremist (unlike Netanyahu, partisan of « Greater Israël »).

The question, therefore, is not to determine whether or not Lieberman is a right-wing extremist, nor what his personal future may be, but what forces led him to break his 1990 alliance with Netanyahu, and his 2003 alliance with the religious movements. All this is being played out in the context of the « Deal of the Century », which is always announced, but never revealed, although it is already in operation.

The Kushner-Trump project considers resolving the Israêlo-Palestinian conflict by economically developing the Arabs and taking into account their successive military defeats. Moscow has declared the planned avoidance of international Law to be « unacceptable ». However, since the Geneva Conference of June 2012, Russia has been trying to gain a foothold in the Middle East and acquire a shared suzerainty (with the United States) over Israël. Lieberman is culturally much closer to the Kremlin than his partners in the White House or the Pentagon.

[3] The Family: The Secret Fundamentalism at the Heart of American Power, Jeff Sharlet, HarperCollins (2009).

[4] Historically, the « Judeo-Christians » built the Church of Jerusalem around Saint James. They were expelled from the Synagogue during the fall of Jerusalem. Their current disappeared, except for certain groups in the Middle East, including that of the 7th century in which Mahomet grew up. The only Christians who survived were the pagans converted in Damascus around Saint Paul. For nineteen centuries, the expression « Judaeo-Christian » no longer had any meaning, since the two religions were distinct and opposed in terms of the respect for the Law of Moses. During the Cold War, the Pentagon reprised the expression, and built an œcumenical movement around pastors Abraham Vereide and Billy Graham. Curiously, in the 21st century, we talk of a « Judaeo-Christian culture », although the expression has no counterpart in reality.