President Trump does nothing like his predecessors (except for his model, Andrew Jackson), thereby destabilising his partners. The « Deal of the Century » that he dreamed up for Palestine angered President Abbas, who interpreted it from the point of view of previous US propositions. Could he have been wrong? 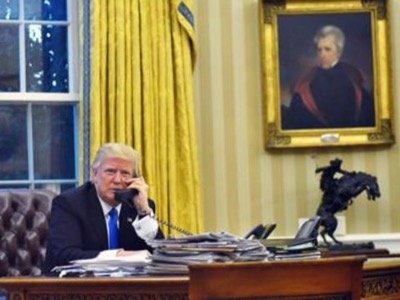 President Donald Trump decorated the Oval Office with a portrait of his predecessor, Andrew Jackson.

President Donald Trump has declared several times that his method of government was enough to solve many different conflicts, and that he even hoped, during the course of his mandate (or mandates), to attain peace between the Palestinians and the Israëlis.

According to the international Press, Donald Trump has evolved, for US electoral reasons. Although he once seemed little interested by religious questions, he has apparently moved closer to the Christian Zionists and is now under the influence of his vice-President, the Evangelical Christian Mike Pence, and one of his sponsors, the Jewish casino-operator Sheldon Adelson.

President Trump’s decisions to move the US embassy from Tel-Aviv to Jerusalem, to interrupt the financing of the United Nations Relief and Works Agency for Palestine Refugees in the Near East (UNRWA), and then to recognise Israëli sovereignty over the occupied Syrian Golan, have been interpreted as confirming his pro-Israëli bias.

All this is true, but does not enable us to understand Donald Trump’s singular approach to the Palestinian conflict, which could lead to serious errors of interpretation. In order to grasp his approach, we have to study his model, President Andrew Jackson, and replace it in the particular situation of the United States before the War of Secession.

Like Israël and Rhodesia, the United States is a Western colony which has freed itself from the British Empire. However, their situations are very different.

Israël is colony born of a political project formulated in the 17th century by Lord Cromwell – the instrumentation of the Jewish diaspora by the Empire. Its realisation, even via the auto-proclamation of independence by armed forces, still corresponds to this project. On the contrary, the United States is the fruit of the Puritan and Egalitarian project of the same Lord Protector for the British population. In both cases, the goal was to create a new model of society defined by the religious principles of a single Christian sect (and not Jewish) [1].

Colonisation, occupation and extermination of the native Americans

In the Americas, more than half of the British immigrants before independence were poor wretches who hoped to use their own production tool, a patch of land, in exchange for a service to the King. They accepted the status of indentured servant for between 4 and 7 years, and were harshly treated. In order to complete the work of these temporary British slaves, the King opted for permanent African slaves. As from the declaration of independence, voluntary immigration was accelerated and diversified – Germans, French, Dutch and Jews – while the indentured servants were replaced by African slaves, who were treated even worse. The Europeans settled progressively on the lands of the natives, the Indians. The space was so vast that the arrival of a few hundred thousand foreigners posed no serious problem. But they kept coming.

At the beginning of the 19th century, the humanist President Thomas Jefferson imagined a plan for the sharing of the continent by force – to the West of the Mississippi, the Indians, and to the East, the Europeans. After having deported the tribes to Louisiana, he recommended allowing the individuals who were « civilised » to move to the East and integrate the colonial culture. He thought it would become progressively possible to negotiate with them according the norms of his own culture.

In fact, the main problem was not the space. Even with the immigrants, whether they were free or slaves, the land was still underpopulated. It was a question of the cultural difference. The Indians did not believe that it was possible to own land, but that a tribe could exercise its sovereignty over a certain area. Since, according to their beliefs, the Earth could not be owned, it could not be bought or sold. To pursue this comparison, in Palestine, the Syrians [2] had already been colonised by the Ottomans, and had got used to it. They were mainly sedentary, and accepted individual ownership of the Earth, but - in agreement with the colonial power – they considered that Muslim land could not be governed by non-Muslims.

When General Andrew Jackson became President (1829-37), the demographic pressure of the Europeans was increasing as they arriving in ever-growing increasing numbers in the East. Jackson therefore decided to extend Jefferson’s policy. Instead of war with the different Indian tribes, he attempted to substitute Treaties which would guarantee their relocation to « reserves », always further West. Most of the tribes refused this compromise. The principle was of course rejected by the following waves of immigrants and by the most powerful landowners.

On the contrary, today in Palestine, the Jewish population is stable - immigration no longer even compensates for the emigration – while the Arab population is growing. And yet the expansion of Israëli territory continues without any necessity.

Andrew Jackson has remained in history as the mass murderer of the Indians, the man who planned the genocide of the « Trail of Tears » [3]. This is wrong. He refused systematic extermination – which was later commanded by General Custer - and sought to solve a problem for which there was no solution. The colonists, just like the Israëlis today, can not return to to the lands which their parents had left. Meanwhile, the only Indian tribes which had survived the massacres had signed a peace treaty with Jackson. The only truly peaceful solution would have been the fusion of the two communities, but this was impossible due to the cultural divide - an obstacle which no longer exists in Palestine [4].

The « Deal of the Century »

When Donald Trump proposed the economic development of Gaza and the West Bank, with no exchange, he was applying Thomas Jefferson’s policy for the « civilised Indians ». He believed that by integrating them into « the market », he would arrive at peace. He did this all the more generously in that this development would not be financed by the United States, but by the Arab monarchies. In this way, he opposed the Israëli strategy – supported by Sheldon Adelson – of sabotaging the Palestinian economy with the intention of forcing the Palestinians to flee in order to survive.

When Donald Trump refused to support the two-state solution, and returned the question for negotiation between the parties concerned, he acted as Andrew Jackson had done during the negotiations for the Indian Treaties. By doing so, he was opposing the policy adopted by Israël since the Oslo Accords.

The Palestinian Authority considers that it has already accepted a compromise by supporting the UNO resolutions. It therefore demands their application, which Israël has been has been refusing to implement for 70 years. It therefore rejects out of hand the « Deal of the Century », because Donald Trump is ignoring this demand.

This attitude is legitimate and honourable. All the governments in the world know that if the resolution of the conflict is founded on the rules of Anglo-Saxon Law, in violation of those of International Law, peace here would open the doors to other wars elsewhere.

Indeed, Anglo-Saxon Law distinguishes itself from all other forms of Justice in the world. It states that two opposing parties in a case of criminal offence can close the affair by way of a transaction which ignores local Law. In the national context, this is class Justice, while in the international context, it’s the law of the strongest.

In any case, the Palestinian Authority is wrong to accuse Donald Trump of being more favourable to Israël than George Bush Jr. On this point, their attitude can only be explained by the fact that they owe their judicial existence to the Oslo Accords. It would be more efficient to consider that, despite his arrogance, Donald Trump is acting in good faith – that his plan is less favourable to the Israëlis than the status quo, and that he is not hostile to international Law – in short, that certain aspects of his mediation could be positive for the Palestinian cause.

My analysis may be polluted by the fact that I have not lived under occupation for 70 years, and that I was educated by a colonising nation, but I do not believe that the present choice is between Collaboration or Resistance, as it was during the Nakba [5]. Thus I have no lessons to give, but wish simply to state that we must not repeat the errors of the past and insult a person who is opening a door in good faith.

It seems that President Mahmoud Abbas is thinking about reorientating his position. He ordered the release of the business leader who, according to Abbas, betrayed the Palestinian cause by taking part in the Bahrein workshop on the « Deal of the Century ». and is preparing a delegation to go and check the temperature of the White House.

[2] Reminder – before the British colonisation, Palestine was not an independent state, but a region of Greater Syria within the Ottoman Empire.

[3] During their deportation, several thousand Cherokees died of hunger and fatigue on the « Trail of Tears ».

[4] In 1948, David Ben Gourion unilaterally proclaimed the independence of the Hebrew state, in the name of the Jewish security forces. Simultaneously, between 700,000 and 900,000 Palestinians were expelled from their homes and their land. This was the Nakba (catastrophe).

[1] “Who is the Enemy?”, by Thierry Meyssan, Translation Roger Lagassé, Voltaire Network, 4 August 2014.

[2] Reminder – before the British colonisation, Palestine was not an independent state, but a region of Greater Syria within the Ottoman Empire.

[3] During their deportation, several thousand Cherokees died of hunger and fatigue on the « Trail of Tears ».

[4] During the three centuries of Ottoman occupation, the Arab populations were deprived of schooling. Only the rich families could afford an education for their children. This resulted in the collapse of Arab civilisation (which was already in decline).Today the UNRWA has access to a high level of university education. The Agency was encouraged by Israël, which saw in this an additional stimulation to persuade the Palestinians to abandon their land and leave to seek wealth overseas.

[5] In 1948, David Ben Gourion unilaterally proclaimed the independence of the Hebrew state, in the name of the Jewish security forces. Simultaneously, between 700,000 and 900,000 Palestinians were expelled from their homes and their land. This was the Nakba (catastrophe).