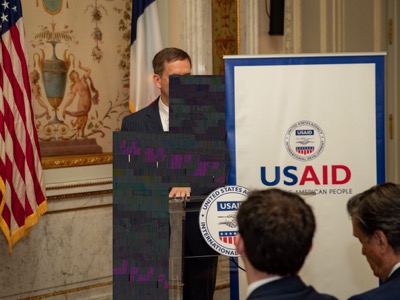 Tom, thank you for those kind words. A special thank you to the Community of Democracies for co-hosting this event today. Ladies and gentlemen, I am truly honored to join you today. Especially in a place named for a man who played such a tremendous role in Transatlantic history. George Marshall’s wartime contributions helped secure victory. His postwar contributions secured a lasting peace, and the birth of the modern Transatlantic alliance. USAID actually traces its roots back to Marshall. His principles are very much at the heart of our mission to help countries on their "Journey to Self-Reliance." I’m honored as well, and humbled to join you at a time when anniversaries all around us recall such dramatic momentous moments in the story of liberty’s expansion.

First, of course, and Tom made reference to it, today is July 4th. The day when we commemorate the beginning of America’s experiment with democracy and human liberty. We call it the American experiment, not only because it departed so sharply from other nations of the time, but also because it acknowledges that we, ourselves, are imperfect. The experiment must continue as we strive in our Constitution’s words to "form a more perfect union."

We’re also just a few weeks after the seventy fifth anniversary of D-Day. How can anyone not be stirred by the ceremonies of that day and the stories and the images that those ceremonies brought forth? The courage and sacrifice of thousands of young Americans and Brits and Canadian, French, and others, who hit the beaches and scaled the cliffs of Normandy. It left a profound mark on our world.

Steelworkers from Pittsburgh. Farm boys from Alberta, factory hands from Manchester. Brave young men. Most of them not yet 20 years old, facing extraordinary odds as they rushed forward against a hail of gunfire. They helped bring peace to their times and ours.

But peace, of course, didn’t necessarily mean freedom, at least not everywhere and not for everyone.

And, that’s why the year 2019 is, itself, notable. We recall today a chain of events 30 years ago this year that created one of the greatest flowerings of democracy in all of human history. Three decades ago, men and women from East Germany climbed atop the Berlin Wall and boldly asserted their freedom. Across the former Eastern Bloc, people who had long suffered under the yoke of Soviet oppression demanded liberty, dignity, and the right to lead their own future. And with the staunch support of the U.S. and the Trans-Atlantic alliance, their long struggle eventually came to an end.

In the Baltic states, nearly 2 million people linked arms to form a human chain nearly 375 miles long. In a powerful call for independence, an independence that soon came.

In Hungary, the long ruling Communist Party finally acceded to the wishes of millions of Hungarians who had long demanded free elections. Since those hopeful, heady days, liberty and democracy have brought development and prosperity to millions of people across this entire region.

But around those same days, President Reagan also warned us that freedom and democracy are neither assured or inevitable. In his historic speech before the British Parliament, Reagan said, "No, democracy is not a fragile flower. Still it needs cultivating." In other words, we can never rest.

Reagan foresaw days when disciples of authoritarianism would claw and scheme to get their power back. Perhaps, he even imagined a time when they would seek out openings to sow discord, weaken faith in democracy, and undermine independence, if for no other reason than to deflect attention from their own failings and shortcomings in delivering to the people of the region.

The days that Reagan foresaw are here. To be clear, the regime in Moscow is not the only authoritarian power that is aggressively seeking a new ideological sphere of influence beyond its borders. However, in Europe and Eurasia, the Kremlin’s efforts are unmistakable. There is no other way to put it, Moscow is working relentlessly, undermining economic liberalization, reverse democratic development, and weaken the sovereignty of individual states.

Like a cunning predator, it’s deploying a range of tactics and tools. Like in the information space, the Kremlin devotes almost $300 million each and every year on platforms like Russia Today and Sputnik International. These platforms drive propaganda, painting neighbors in unflattering and even inflammatory terms. And, then there is social media. Thousands of Kremlin paid teams flood platforms and peddle content designed to create confusion, distrust, and cynicism about democratic and Western institutions.

But, authoritarian misinformation is only part of its approach. Moscow also employs economic lines of manipulation, particularly in the energy sector. It leverages the historic dependence of their neighbors on Russian oil and gas. And, when energy debts are accrued, the Kremlin uses this imbalance to demand equity in their neighbors’ energy infrastructure.

Today, we’re gathered in a room and a place that reminds us of the importance of alliances and how we’ve so often stood with each other in times of need. Today, I want to suggest that this is one of those times. At USAID, we’re stepping forward to assist democracies and institutions who may be targeted by Kremlin aggression. We’ve crafted a framework for this assistance, that we call Countering Malign Kremlin Influence, or CMKI.

CMKI responds to authoritarian challenges by increasing the economic and democratic resilience of targeted countries, and working to mitigate the effects of Kremlin soft power aggression upon a range of institutions.

So what does CMKI really look like? How would you recognize it in action? Okay. The nuts and bolts of the framework. First: economics. USAID stands ready to assist partners in reducing dependence on Russian energy sources.

Our assistance will include working with individual states to create effective, pro-growth, legal and regulatory frameworks, and assisting them in joining well-functioning local and regional energy markets.

As part of these efforts, USAID is prepared to support independent regulatory authorities and strengthen the cybersecurity of regional energy utilities. We will also assist partners in efforts to diversify exports, more effectively compete in Western markets, and meet the demands of international markets and standards.

With our support, Moldova is shifting its trade westward. Today, over 70 percent of Moldova’s exports go to the EU and only 16 percent go to Russia.

We offer tools for reform-minded leaders and civil society voices to tackle the corrupt government practices that Kremlin agents often selectively exploit for Moscow’s benefit. There are clear signs that this approach can work.

In response to past Kremlin efforts to hack Ukraine’s elections, USAID provided approximately $2.7 million in elections cybersecurity equipment and training for their Central Election Commission this year in order to support free and fair elections.

Close observers tell us that these tools and training made a significant difference. Across the region, USAID is supporting a new generation of young political leaders to help build common ground, foster multi-party dialogue, and support the enabling environment for civil society groups. We’re also providing grants to grassroots organizations across the region that focus on promoting good governance and citizen advocacy.

Third, and of growing importance, at the heart of CMKI is our support for building the capacity of indigenous media to provide trusted, independent news and information services. Because authoritarians are mobilizing, some would say weaponizing, their disinformation, we’re also supporting extensive media literacy programs in targeted countries.

We’re dedicated to helping citizens recognize disinformation efforts and to see them for what they are. For example, in Georgia, USAID is supporting an initiative to crowdsource efforts to help identify and track anti-Western disinformation. We’re working with hundreds of Georgian volunteers online and with our support, 11 independent and credible media partners across Bosnia Herzegovina, Kosovo, North Macedonia, Montenegro, and Serbia are growing their audiences, diversifying their revenue, and elevating their digital media presence to push back on disinformation.

Liberty and democracy emerged in Europe and Eurasia only after remarkable acts of physical and moral courage. From D-Day, to tearing down the wall, from solidarity to the Baltics human chain, CMKI honors all of these heroes for what they fought for: human dignity, private enterprise, and free markets, citizen responsive governance lifting lives, building communities, creating hope.

I’ll close with this. In 2015, I had the honor of meeting Russian democracy author, activist Vladimir Kara-Murza. He only recently emerged from the coma that was caused by his mysterious poisoning. I remember he walked with a cane at that point, his breathing was labored, but his eyes burned brightly when he spoke of democracy and liberty in his homeland.

We won’t. We’re on their side just as we are and always will be with the people of Ukraine, Moldova, Georgia, the Baltics, and beyond. So many represented in this room. We know that the citizens of the region simply want liberty, free and fair elections, and a chance for better lives for themselves and for their children. We will join our friends in pushing back against authoritarian aggression and pushing forward and bolstering liberty’s resilience, and making sure that we all live up to the promise and sacrifices of D-Day and the flowing of democracy some 30 years ago.

That’s what Countering Malign Kremlin Influence is all about. I salute all of you who are here today for what you are doing to push back on authoritarianism and to push forward on liberty and democracy. These are the days that Reagan foresaw. And, just as Reagan and so many others across this region and across the world stood up for freedom, now it’s our turn. Thank you.