The race for the domination of Space

The remarkable display of aerobatics by a flying infantryman during the military parade of 14 July 2019 masks the creation of a Joint Military Space Command. After Russia, China and the United States, France is the fourth military power to invest in a sector which for a long time had been free from nuclear weapons. Not much longer. 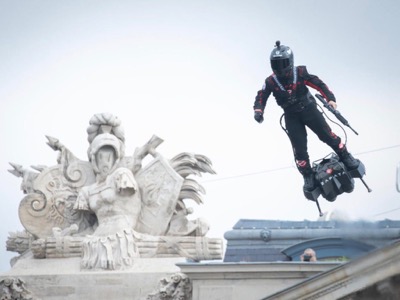 « The flying man bewitches Paris at the 14 July parade » - headlines like that were used to describe France’s military parade along the Champs Élysées. As usual, we were given the impression that we were being informed about everything in the minutest detail.

But « big news » is hiding from us everything that we really need to know. For example, that two days before the parade, President Emmanuel Macron was in the port of Cherbourg to participate in the launching of a nuclear attack submarine, the Suffren, the first vessel in the new Baracuda series, built on a ten-year programme at a cost of 9 billion Euros. The submarine, armed with long-range cruise missiles with both conventional and nuclear capacities, and equipped with a mini-sub for special forces operations, was described by Admiral Christophe Prazuck as a « hunter born to fight our enemies ».

Among the 700 international guests at the launch ceremony was the Australian Minister for Defence, Linda Reynolds, who had signed a contract to buy 12 French attack submarines. At the moment, in Australia, there are on-going discussions concerning the possibility for the country to leave the Treaty on the Prohibition of Nuclear Weapons (TPNW) and build its own nuclear arsenal. Australia, a partner of NATO, is opposed to the Treaty, which was approved in July 2017 by the General Assembly of the United Nations with 122 voices for. So far, it has been signed by 70 countries, but ratified only by 23 (including Austria, Cuba, Mexico, New Zealand, South Africa and Venezuela), less than half of the 50 signatures necessary for its implementation.

Sweden, which had approved it in 2017, has announced that it will not sign the Treaty either – a decision behind which can be felt the influence of NATO, the sworn enemy of the Treaty on the Prohibition of Nuclear Weapons (TPNW).

While nuclear disarmament remains on paper, the possibility of proliferation escalates, as does the risk that the arms race will be run increasingly on the qualitative level. This was confirmed by the announcement made, on the eve of the 14 July parade, by President Macron himself – in September, France will create a new National Command for its Military Space Force, with a primary financing of 3,6 billion Euros over 6 years.

« The new space and military doctrine which was proposed to me by the Minister, and which I approved, will enable us to ensure our defence of space and by space » [1], declared President Macron. So the militarisation of space is being intensified, an area of growing strategic importance, given that the main arms systems, beginning with nuclear weapons, depend on spatial systems.

With its new Space Command, France is taking up position in the wake of the United States. In February, President Trump signed a directive inaugurating the US Space Force, a force specifically designed for military operations in space, directed above all against Russia and China. The Senate Armed Services Committee, by handing the command of the new Force to the Aeronautics sector, defined space as a « field for the conduct of warfare ». The meetings announced by the United Nations in March, an attempt to prevent a spatial arms race, failed due to US opposition. The USA refused to join negotiations to discuss the first draft of a Treaty, presented by China and Russia, which would forbid the placing of weapons in space, and stipulates a series of legal limits for using space for military purposes.

While media attention was focused on the « flying man » who sky-danced over the Champs-Élysées, we forgot the fact that in a short time there will be nuclear weapons flying above our heads, in orbit around the Earth.

[1] The exact quote is - « The new military doctrine for space, which was proposed to me by the Minister, and which I approved, will enable us to ensure our defence of space and by space. We will reinforce our understanding of the spatial situation, we will protect our satellites more efficiently, including in an active way. And to make this corps a reality, to ensure the development and reinforcement of our spatial capacities, a grand Space Command will be created in September within the structure of the Air Force. This will become, in time, the Air and Space Force. New and indispensable investments will be decided ». « Discours d’Emmanuel Macron aux armées », par Emmanuel Macron, Réseau Voltaire, 13 juillet 2019.