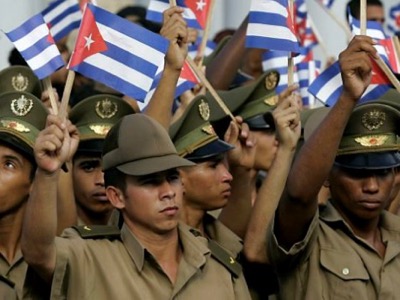 The State Department has updated the Cuba Restricted List to add four sub-entities owned by the Cuban military. The changes take effect today, July 26, as Cuba celebrates more than 60 years since the start of the Cuban Revolution. Sixty years after Castro promised to improve the lives of the Cuban people, the revolution continues to fail its people by squandering Cuba’s economic potential through mismanagement and oppressing brave Cubans that continue the fight for freedom. The Department remains committed to ensuring U.S. funds do not directly support Cuba’s state security apparatus, which not only violates the human rights of the Cuban people, but also exports this repression to Venezuela to support the corrupt Maduro regime.

In accordance with the June 2017 National Security Presidential Memorandum-5, “Strengthening the Policy of the United States Toward Cuba,” the U.S. government generally prohibits direct financial transactions with listed entities and sub-entities because they would disproportionately benefit the Cuban military, intelligence, and security services or personnel at the expense of the Cuban people or private enterprise in Cuba.

For more information on the regulations prohibiting direct financial transactions with entities and sub-entities on the Cuba Restricted List, please refer to the November 2017 regulatory amendments by the Departments of the Treasury (31 CFR part 515) and Commerce (15 CFR parts 730-774).