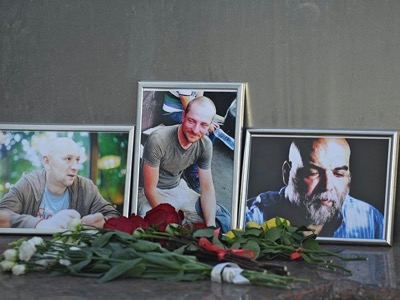 The Investigative Committee of the Russian Federation, in cooperation with the relevant Central African agencies, continues to investigate the murder of Russian journalists Kirill Radchenko, Orkhan Dzhemal and Alexander Rastorguev in the Central African Republic (CAR) a year ago. Criminal proceedings were initiated under Article 105 (item “a,” part 2) of the Criminal Code of the Russian Federation.

The Russian leadership keeps the investigation into all the circumstances of the tragic death of our compatriots and the identification of the perpetrators under its control.

The status of the investigation is regularly raised in contacts with Central African officials. Thus, during his meeting with Foreign Minister of Central African Republic Sylvie Baipo-Temon on the sidelines of the 23rd St Petersburg International Economic Forum (St Petersburg, June 6), Foreign Minister Sergey Lavrov spoke about the need for additional efforts to expedite the investigation of the death of the Russian journalists as much as possible.

The Russian Investigative Committee sent requests for providing legal aid on this case and for performing the investigative proceedings to the Ministry of Justice and Human Rights of the Central African Republic via diplomatic channels.

On July 26, the Prosecutor-General’s Office of the Central African Republic released a statement saying that the investigation had made substantial progress and that the public would be informed about the results soon. The personal belongings of the dead were transferred to the Russian Investigative Committee.

The Russian Foreign Ministry will continue supporting the Investigative Committee within the limits of its competence in investigating this case.

In connection with several recent publications in the media, which often contain distorted or even false information, we would like, once again, to draw the attention to a number of points.

Many questions for the organisers of the trip remain unanswered. Thus, the CAR Embassy in Moscow was led astray regarding the real purpose of the trip by the journalists and issued tourist visas for them. Therefore the journalists worked in the CAR without accurate accreditation or permits for bringing in and using cameras in the country.

The Berengo military training camp that the journalists were supposed to enter is a special state protection area under the law on organising national defence and the army of the CAR. Visits to Berengo are strictly regulated. If the journalists had entered the camp to shoot a video, they would have been arrested on suspicion of spying. Typically, the film crews of the American CNN and Qatari Al-Jazeera, which recently visited the CAR, had notified the competent agencies in advance about their intentions to visit the Berengo camp and shoot a video there. They received the required accreditation and had the opportunity to visit the camp and make a report on it.

While crossing the checkpoint in Sibut the journalists were provided a forged pass with the UN logo, which presented them as UN volunteers. The misled law enforcement officials that are prohibited from interfering with the movement of UN mission employees merely checked their passports, although they strongly advised the journalists to abstain from a night trip along the route controlled by illegal armed groups.

We would like to note that the websites of the Russian Foreign Ministry and its Crisis Management Centre and the Russian Embassy in Bangui inform travelers about the complicated military-political situation in the CAR (14 of its 16 provinces are controlled by various armed groups) and advise them to avoid trips to that country, especially beyond its capital. Those who sent the film crew to Bangui did not inform the Russian Embassy about the arrival of the journalists and the purpose of their trip. Otherwise, the Embassy could have ensured their security and probably prevented the tragic consequences.

This again calls into question the goal of the organisers of this visit, which sent the journalists on an obviously life-threatening mission.

Source : “Press release on the progress of the investigation of the murder of Russian journalists in the Central African Republic ”, Voltaire Network, 1 August 2019, www.voltairenet.org/article207199.html

Statement by Marie Harf on U.S. Support of French Military Actions in the CAR

Source : “Press release on the progress of the investigation of the murder of Russian journalists in the Central African Republic ”, Voltaire Network, 1 August 2019, www.voltairenet.org/article207199.html