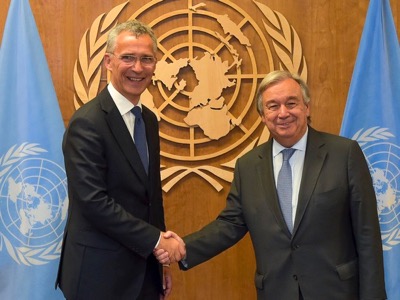 On August 1, the UN Secretary-General announced his decision to “establish an internal United Nations Headquarters Board of Inquiry to investigate a series of incidents that have occurred in north-west Syria since the signing of the Memorandum on Stabilization of the Situation in the Idlib De-escalation Area between the Russian Federation and the Republic of Turkey on 17 September 2018.”

We have authentic information that this provocative idea was actively advocated by countries hostile to the legitimate authorities of the Syrian Arab Republic and to our efforts to eradicate the terrorist threat in that country and to guarantee its territorial integrity and sovereignty. We have repeatedly noted that the Syrian military units, supported by the Russian Aerospace Forces, are merely conducting retaliatory and limited operations in order to neutralise the terrorists and to destroy their facilities. Attempts to smear these efforts and to discredit Damascus will then, doubtless, be used to create new obstacles in the path of political settlement.

We have noted that António Guterres has motivated his decision by Article 97 of the UN Charter stating expressly that: “The Secretariat shall comprise a Secretary-General and such staff as the Organisation may require. The Secretary-General shall be appointed by the General Assembly upon the recommendation of the Security Council. He shall be the chief administrative officer of the Organisation.” It is unclear how this wording can be interpreted as allowing the establishment of an internal Board of Inquiry. Against the backdrop of the media reports about a demarche by some members of the UN Security Council demanding an investigation into the developments in the Idlib de-escalation zone, it would also be incorrect to overlook the UN Charter’s Article 100: “In the performance of their duties the Secretary-General and the staff shall not seek or receive instructions from any government or from any other authority external to the Organisation …”

Barring the legal discrepancies of this case, we would like to understand how the UN Secretariat is planning to organise the work of the Board of Inquiry. Will its members work remotely, considering the fact that the Idlib de-escalation zone is mostly controlled by terrorists? Or will they take advantage of certain sources seen as “reliable” by UN officials, such as the so-called White Helmets who are feeling free on Jihadist-controlled territories, and who have been repeatedly caught red-handed by the Syrian authorities and the Russian Centre for Reconciliation of Opposing Sides in the Syrian Arab Republic and found guilty of spreading staged reports and fake stories in order to organise provocations and to incite anti-Damascus moods?

We would also like to inquire about the UN Secretary-General’s plans to investigate the incidents involving the death of civilians in such Syrian cities as Raqqa, Al-Baghuz and Hajin, as well as in Libya, Iraq and Afghanistan, due to air strikes carried out by the United States and its allies.