The People’s Republic of China is in no way a military threat to the rest of the world: it does not see itself as a conquering power, but as resilient. It is in this sense that the ceremonies of its 70th anniversary must be understood. It has recovered politically and economically from the aggression it suffered in the 19th century, but its culture today exerts no attraction over others. 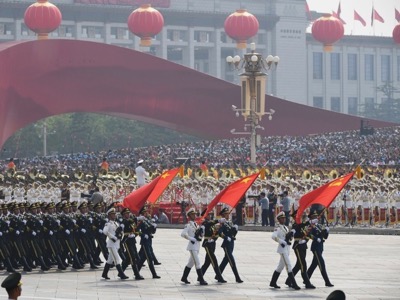 Seventy years ago, on October 1, 1949, Mao Zedong proclaimed the birth of the People’s Republic of China from the Tien An Men gate. The anniversary is being celebrated today with a military parade in front of the historic gate in Beijing. From Europe to Japan and the United States, the mainstream media present it as an ostentation of forces by a threatening power. Virtually no one remembers the dramatic historical episodes that led to the birth of New China.

Thus disappeared China, reduced to a colonial and semi-colonial state, subdued, exploited and dismembered since the middle of the 19th century by the European powers (Great Britain, Germany, France, Belgium, Austria and Italy), by tsarist Russia, by Japan and by the United States. Thus, the bloody coup d’état carried out in 1927 by Chiang Kai-shek - later supported by the Anglo-United States - was erased, exterminating a large part of the Communist Party (born in 1921) and killing hundreds of thousands of workers and peasants. There is no mention of the Red Army’s "Long March", which, begun in 1934 as a disastrous retreat, was transformed by Mao Zedong into one of the greatest political and military achievements in history. We forget the war of aggression against China unleashed by Japan in 1937: Japanese troops occupy Beijing, Shanghai and Nanjing, killing more than 300,000 civilians in the latter, while more than ten cities are attacked with biological weapons. The history of the anti-Japanese United Front, which the Communist Party forms with the Kuomintang: the Kuomintang troops, armed by the United States, on the one hand fight the Japanese invaders, on the other hand impose an embargo on the areas liberated by the Red Army and concentrate the Japanese offensive against them; the Communist Party, which went from 40,000 to 1.2 million members, guides the popular forces from 1937 to 1945 in a war that increasingly wears out the Japanese army. It is not recognized that, with its Resistance, which cost more than 35 million lives, China is a decisive contributor to Japan’s defeat, which, defeated in the Pacific by the United States and in Manchuria by the USSR, surrendered [to the United States] in 1945 after the atomic bombing of Hiroshima and Nagasaki. What happens immediately after Japan’s defeat is hidden: according to a plan decided in Washington, Chiang Kai-skek tries to repeat what he did in 1927, but his forces, armed and supported by the United States, find in front of them the People’s Liberation Army of about one million men and a militia of 2.5 million, backed by broad popular support. About 8 million Kuomintang soldiers are killed or captured and Chiang Kai-shek flee to Taiwan under US protection.

That, in an extreme synthesis, is the path that led to the birth of the People’s Republic of China 70 years ago. A story rarely or not at all covered in our school textbooks, which are marked by a restricted Eurocentric vision of the world, which is increasingly anachronistic. A history knowingly erased by politicians and opinion makers because it exposes the crimes of imperialism, putting the European powers, Japan and the United States in the dock: the "great democracies" of the West who proclaim themselves supreme judges with the right to establish, on the basis of their canons, which countries are democratic and which are not.

But we are no longer at the time of the "concessions" (urban areas under foreign administration) that these powers had imposed on China, when entrance to the Huangpu Park in Shanghai was "forbidden to dogs and Chinese people".