Statement by the President of the Security Council on Syria 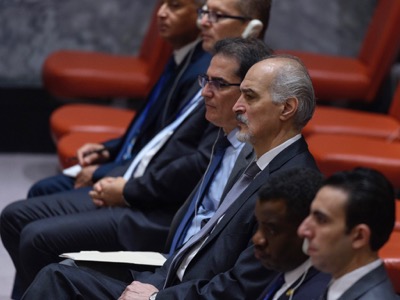 “The Security Council welcomes the Secretary-General’s September 23, 2019 announcement of the agreement of the Government of the Syrian Arab Republic and the Syrian Negotiations Commission for a credible, balanced, and inclusive Constitutional Committee facilitated by the United Nations in Geneva.

“The Security Council determines that the launch of the Syrian-owned and Syrian-led Constitutional Committee should be the beginning of the political process to end the Syrian conflict in line with UN Security Council Resolution 2254 (2015) that meets the legitimate aspirations of all Syrians.

“The Security Council expresses its appreciation for the United Nations Special Envoy’s diplomatic engagement to finalize the agreement between the Syrian Arab Republic and the Syrian opposition to form the Constitutional Committee, emphasizes its strong support for Special Envoy Pedersen and the United Nations’ initiative to convene the first meeting of the Constitutional Committee in Geneva, Switzerland by October 30, 2019.

“The Security Council reaffirms that there can be no military solution to the conflict in Syria, and that it can only be resolved through the full implementation of 2254.

“The Security Council reaffirms its strong commitment to the sovereignty, independence, unity, and territorial integrity of Syria.”

Source : “Statement by the President of the Security Council on Syria”, Voltaire Network, 8 October 2019, www.voltairenet.org/article207859.html

Source : “Statement by the President of the Security Council on Syria”, Voltaire Network, 8 October 2019, www.voltairenet.org/article207859.html