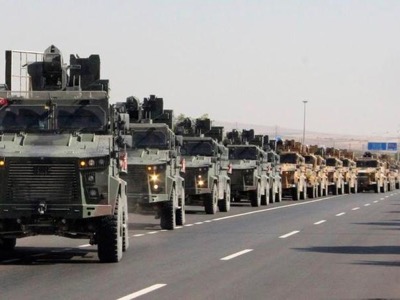 On instructions from my Government, I should like to transmit to you the statement that was issued by the Ministry of Foreign Affairs and Expatriates of the Syrian Arab Republic with regard to the military build-up on the Turkish-Syrian border:

The Syrian Arab Republic condemns in the strongest terms the reckless statements and the hostile intentions of the Turkish regime and the military build-up on the Syrian border, which constitutes a flagrant violation of international law and a blatant violation of Security Council resolutions, in all of which the Council affirms that the unity, integrity and sovereignty of Syria must be respected.

The hostile conduct of the Erdoğan regime reveals clearly the expansionist ambitions of Turkey in the territory the Syrian Arab Republic, which is something that cannot be justified under any pretext. The Turkish regime’s purported aim of securing the border is contradicted by the regime’s denial of and disregard for the Adana agreement. The Erdoğan Government would be able to achieve that aim were it only to respect and comply with that agreement.

The Syrian Arab Republic holds certain Kurdish organizations responsible for what is happening because of their fealty to the American project. In our past meetings with those organizations, we alerted them repeatedly to the dangers of that project and urged them not be used as tools in the service of American policy against their homeland. However, those organizations insisted on being the tools of foreigners.

The Syrian Arab Republic reaffirms the inviolability, sovereignty and integrity of its territory, and reiterates its determination and resolve to respond to the Turkish aggression by all legitimate means. In addition, it stresses that it stands ready to embrace its misguided people if they return to their senses, with a view to preserving the safety and unity of the territory and people of Syria.

Syria would like to point out that the Erdoğan regime would place itself among the ranks of terrorist groups and armed gangs if it were to continue with its aggression, and thereby forfeit unequivocally the role of guarantor in the Astana process and deal a crushing blow to the entire political process.