Meeting of a Russian interministerial delegation with Bashar al-Assad 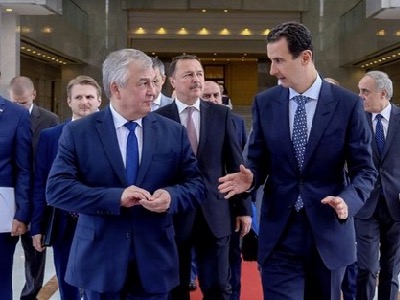 On October 18, the Russian interdepartmental delegation, consisting of Special Presidential Representative for the Syrian Settlement Alexander Lavrentyev, Deputy Foreign Minister Sergey Vershinin and representatives of the Defence Ministry, was received by President of the Syrian Arab Republic Bashar al-Assad in Damascus.

The discussion focused on the current situation on the ground in Syria in the context of growing tension in the north-east of the country. It was acknowledged that there was a need for measures to de-escalate tensions and ensure security in that area. The parties expressed a shared view that the way to reliable and long-term stabilisation in the zone to the east of the Euphrates was through the reinstatement of Syrian sovereignty and territorial integrity, as well as the restoration of Syrian government control over all Syrian lands.

In addition, the parties considered in detail a set of issues associated with the launching and organisation of the efficient operation of the Constitutional Committee that is expected to be convened in Geneva in late October.