“The Caliph”, a CIA blockbuster between fiction and reality

It is a well-defined product. At the end of a vast special operation in which an unavowable weapon was used, it is necessary to stage the death of the person who wielded it. This is the best way to erase the traces in public opinion. After Bin Laden’s death, this is al-Baghdadi’s death 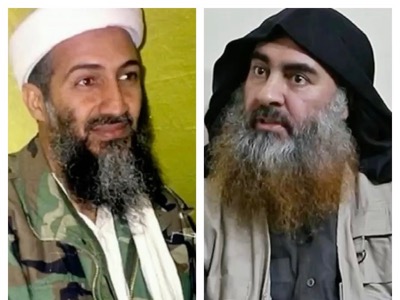 "It was like watching a movie," President Trump said after witnessing the elimination of Abu Bakr al-Baghdadi, the Caliph, Daesh’s leader, transmitted in the White House Situation Room. It was there that in 2011 President Obama witnessed the elimination of the then enemy number one, Osama Bin Laden, leader of Al Qaeda.

The same staging: the US secret services had long since located the enemy; he was not captured but eliminated: Bin Laden was killed, al-Baghdadi committed suicide or was "suicided"; the body disappeared: that of Bin Laden buried in the sea, the remains of al Baghdadi disintegrated by his explosive belt were also dispersed at sea.

For military actions, the Intelligence Community uses the Command of Special Forces, deployed in at least 75 countries, whose official mission includes, in addition to the "direct action to eliminate or capture enemies", the "non-conventional war conducted by external forces, trained and organized by the Command".

This is exactly what took place in Syria in 2011, the same year that the US and NATO wars demolished Libya. This is demonstrated by documented evidence, already published. For example:

In March 2013, the New York Times published a detailed survey on the CIA network through which rivers of arms for Islamist militants trained by the US Special Forces Command arrive in Turkey and Jordan, with funding from Saudi Arabia and other Gulf monarchies [1].

In May 2013, a month after founding Daesh, al-Baghdadi met with a delegation from the United States Senate in Syria headed by John McCain, as revealed in photographic documentation [2].

In May 2015, Judicial Watch revealed a document by General Michael Flynn, dated August 12, 2012, in which it was stated that there was "the possibility of establishing a Salafist principality in Eastern Syria, and[that] this is exactly what the Western countries, the Gulf states and Turkey that support the opposition want" [3].

In July 2016, Wikileaks revealed a 2012 email from Secretary of State Hillary Clinton in which she wrote that, given the Iran-Syria relationship, "the overthrow of Assad would be an immense benefit for Israel, reducing its fear of losing the nuclear monopoly" [4].

This explains why, although the US and its allies are launching the military campaign against Daesh in 2014, Daesh’s forces can advance undisturbed in open spaces with long columns of armed vehicles.

The Russian military intervention in 2015, in support of the Damascus forces, reversed the fate of the conflict. Moscow’s strategic objective is to prevent the demolition of the Syrian state, which would cause chaos as in Libya, exploitable by the USA and NATO to attack Iran and surround Russia.

The United States, short-circuited, continues to play the card of Syria’s fragmentation, supporting the Kurdish independence fighters, and then abandoning them in order not to lose Turkey, NATO’s outpost in the region.

Against such a backdrop, it is understandable why al-Baghdadi, like Bin Laden (formerly a US ally against Russia in the Afghan war, then in Bosnia and Herzegovina), could not be captured for public trial, but had to physically disappear to make evidence of his real role in the US strategy disappear. That’s why Trump loved the movie so much and it ended well.

[3] Report of the Military Intelligence Agency to the various departments of the Obama administration on jihadists in Syria, August 12, 2012.