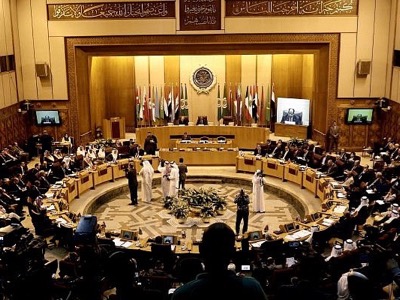 Resolution 8454, entitled “Turkish aggression against Syria”, adopted at the extraordinary session of the Council of the League of Arab States at the ministerial level

The Council of the League of Arab States, convened in an extraordinary session at the ministerial level on 12 October 2019 at secretariat headquarters in Cairo,

Reaffirming its resolutions adopted at the summit level concerning developments in the Syrian crisis, the most recent of which is summit resolution 758 adopted on 31 March 2019 at the thirtieth ordinary session held in Tunis,

Drawing attention to and reaffirming its resolutions concerning violations by Turkey of the sovereignty of Iraq, the most recent of which is resolution 8418 adopted on 15 September at by the 152nd ordinary session,

Reaffirming the importance of preserving the unity and independence of Syria, and reiterating its resolutions concerning the political solution and the implementation of Security Council resolution 2254 (2015), because that is the only means of resolving the crisis in Syria and ending the suffering of the Syrian people,

Having been briefed by delegates and the Secretary-General,

1. Condemn the Turkish aggression against Syrian territories, because it is a clear breach of the principles of the United Nations Charter and Security Council resolutions, in particular Security Council resolution 2254 (2015), in which the Security Council calls for the unity and independence of Syria to be preserved, and because it is a direct threat to Arab national security and to international peace and security, and underscore that any effort by Syria to respond to this aggression and defend Syrian territory are in keeping with the exercise of the inherent right of legitimate self-defence, in accordance with Article 51 of the Charter of the United Nations;

2. Call upon Turkey to end its aggression and withdraw immediately and unconditionally its forces from all Syrian territory, and underscore that this aggression is the latest in a series of unacceptable interventions and repeated attacks by Turkey against the sovereignty of States members of the League of Arab States.

3. Reject categorically any Turkish and or other efforts that are aimed at imposing demographic changes in Syria by force within the so-called buffer zone, because such attempts are a violation of international law that must be addressed and prevented by the international community, and because they pose a serious threat to the unity and territorial independence of Syria and the cohesion of its social fabric, and to reaffirm that international law must be observed;

4. Hold Turkey fully responsible for the implications that its aggression might have for the spread of terrorism or the resumption by terrorist organizations, including Islamic State in Iraq and the Levant (ISIL), of their activities in the region, and to urge the Security Council, in particular its permanent members, to take immediately all measures required to ensure that Turkey fulfil its responsibility to prevent foreign terrorist fighters from exfiltrating Syria or rebuilding their capacity in the country, as that would undermine the progress that has been made in the fight against terrorism and threaten regional and international security;

5. Reaffirm the unity and independence of Syria and the need to commence without delay United Nations sponsored political negotiations, in particular within the framework of the Constitutional Committee that was recently established, in order to implement the provisions of Security Council resolution 2254 (2015) and arrive at a political settlement to the crisis in Syria and end the suffering of the Syrian people, and also to reaffirm that there is no military solution to the crisis and that pursuing the political track is the only means of resolving the crisis and addressing its ramifications in a manner that is in keeping with international law, ensures the security of Syria, its neighbours and the countries of the region, leads to the departure of all foreign forces from Syria and enables Syria to regain its role in the Arab regime of cooperative action;

6. Call upon the Security Council to take the measures needed to compel Turkey to end its aggression and withdraw immediately from all Syrian territory, and to urge the international community to take action in that regard and prevent Turkey from receiving any military support or information that might help it in its aggression against Syrian territory;

7. Instruct the Secretary-General of the League of Arab States to contact the Secretary-General of the United Nations in order to convey to United Nations Members the resolution that the Council of the League adopted and have it circulated as a document of the United Nations, and to explore, in coordination with the Arab member of the Security Council, arrangements to have an Arab ministerial delegation, the composition of which is to be determined, meet with the Council in order to follow up on the matter and take measures to halt the Turkish aggression against Syrian territory;

8. Consider taking diplomatic, economic, investment and cultural measures, as well as measures related to tourism and military cooperation, in response to the Turkish aggression;

9. Instruct the Group of Arab States in New York to examine means of addressing the Turkish aggression at various United Nations bodies, in particular the Security Council, and to present, as soon as possible, its recommendations in that regard to the Council of the League;

10. Establish an Arab committee to follow up on the question of Turkish intervention in Arab countries and to have it present its recommendations to the Council of the League at the ministerial level;

11. Request the Secretary General to follow up on the implementation of the present resolution and report to the Council at its next ordinary session, in coordination with member States.

• Qatar reiterates its long-standing position that the sovereignty of Syria must be maintained. However, we note the enthusiasm with which the Secretariat called for this meeting to be convened is rather missing when it comes to Arab States in which legitimate authority and sovereignty are being violated, either by completely illegitimate forces or forces that are financed, regrettably, by Arab states, and in the absence of a request from the legitimate government, and yet our Council does nothing. Instead, it justifies the intervention by Arab States in the internal affairs of other Arab States under the pretext that they are protecting themselves against terrorism, and it prohibits other States from doing so, thereby establishing a policy of double standards. Accordingly, Qatar expresses its reservation with regard to the present resolution and requests this text be appended thereto.

• Somalia expresses its reservations with regard to this resolution.