Israel is without a government, while protests are rampant in the Sudan, Algeria, Lebanon, Iraq, Kuwait and Iran.

In each of these countries, the hand of the US or US-related organizations looms large, as was the case during the "Arab Spring" in 2010-11.

At that time, numerous sociological studies had emphasized the characteristics of the countries concerned in an attempt to explain such a unique phenomenon. But the features differed from one country to another; hence, the favourable terrain was not what triggered the wave of uprisings, which became known as the "Arab Spring."

In fact, according to internal Foreign Office documents which were disclosed by a senior British official, Derek Pasquill, the "Arab Spring" was an operation concocted in 2005 by the MI6 modelled on the "Arab Revolt" of Lawrence of Arabia. With the only exception that instead of the Wahhabis and the Saudis, it was now a question of placing the Muslim Brotherhood in power. Her Majesty’s Prime Minister, Tony Blair, sold this plan to the USA, which brought it to fruition a few years later, drawing on the students of Gene Sharp. [1]

It is still unclear whether the British are also involved in this new "Arab Spring", but the Free Patriotic Movement of President-General Michel Aoun is currently preparing a brochure of US covert staging posts throughout Lebanon in much the same way as Egypt did under Hosni Mubarak. 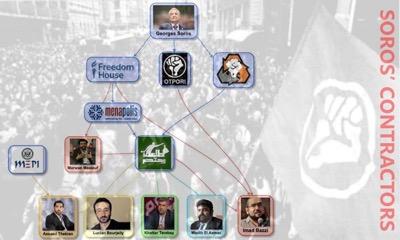 [1] “The Albert Einstein Institution: non-violence according to the CIA”, by Thierry Meyssan, Voltaire Network, 4 January 2005.