The economy of Naples is slowly changing, to become increasingly centered on the basis of the presence of NATO. The young troops involved do not come mainly from the Naples region, but in general from all of Southern Italy, severely penalised by a level of unemployment among young people which is three and one half times superior to the European average. The money invested in the development of these military installations is not only far from an indispensable expense, but is now absent from the economy of Southern Italy. 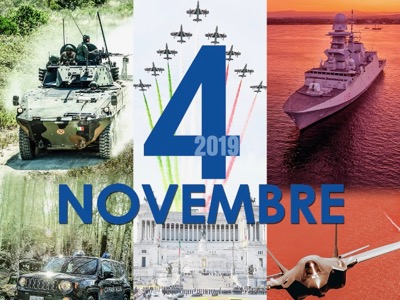 It was Naples, not Rome, which was the centre of National Unity and Armed Forces Day on 4 November [1], when five battalions paraded along the Caracciolo Sea Front.

But the most important point of the event was the area reserved for the inter-forces exhibition, which for five days welcomed mostly young people and children on the Piazza del Plebiscito. Visitors were allowed to climb aboard a fighter-bomber, fly a helicopter with a flight simulator, admire a Predator drone, climb into a tank, follow a course of training with military instructors, and then go to the port to visit an amphibious assault ship and two frigates (FREMM). It was a huge « War Fair », put together for one specific reason - recruitment.

70 % of the young people who want to sign up live in the Mezzogiorno region, especially in Campania and Sicily, where youth unemployment reaches 53,6 %, compared with the EU average of 15,2 %. The only organisation which offers them a « stable » job is the army.

However, after selection, the number of recruits proves to be inferior to what is considered necessary. The armed forces need more personnel, because they are currently engaged in 35 operations in 22 countries, from Eastern Europe to the Balkans, from Africa to the Middle East and Asia. These are « peace missions » carried out above all in areas where NATO, under US command, and with the active participation of Italy, sparked wars which have demolished entire states, and destabilised entire regions.

The maintenance of the armed forces and the necessary munitions – such as the Italian F-35’s deployed by NATO in Iceland, and demonstrated by the RAI on 4 November – costs the annual sum of approximately 25 billion Euros of public money. In 2018, Italian military expenditure climbed from 13th to 11th world position, but the USA and NATO are applying pressure for a further increase, dependent above all on the escalation against Russia.

Last June, the Conte government « released » 7,2 billion Euros to be added to military expenditure. In the month of October, during a meeting between the Prime Minister and the Secretary General of NATO, the Conte II government reaffirmed its engagement to increase military spending by approximately 7 billion Euros as from 2020 (La Stampa, 11 October 2019). Thus Italy is progressing from a military expenditure of about 70 million Euros per day to that of about 87 million Euros per day. This is public money subtracted from fundamental productive investments, particularly in regions like Campania, aimed at reducing unemployment, beginning with youth unemployment.

The « investments » made in Naples are very different. The city has adopted a growing role as the headquarters of some of the most important command centres of the USA and NATO.

The headquarters of the US Command of Naval Forces in Europe is settled at Naples-Capodichino, under the orders of a US admiral who also commands US Naval Forces for Africa and the Allied Joint Force (JFC Naples) with a headquarters in Lago Patria (Naples). Every two years, JFC Naples takes command of the NATO Response Force, a joint force for military operations in the « zone of responsibility » of the Allied Supreme Commander in Europe, who is always a US General, and « outside of this zone ».

Since 2017, the headquarters at Lago Patria has housed the NATO Hub of Strategic Direction for the South, centre of Intelligence – in other words, espionage - concentrated on the Middle East and Africa.

The Sixth Fleet is under the command of Naples, with a base in Gaeta, which – according to US Vice-Admiral Lisa Franchetti – operates « from the North Pole to the South Pole ».

This, then, is the role of Naples in the framework of NATO, defined by President Mattarella, in his message of 4 November, as an « alliance to which we have freely chosen to contribute, for the protection of peace in the international context, to safeguard the weak and the oppressed, and to support human rights ».

[1] The 4 November is the Day of National Unity and the Armed Forces, a commemoration created in 1919, during the Italian armistice of the First World War (1915-1918 in Italy). Author’s note