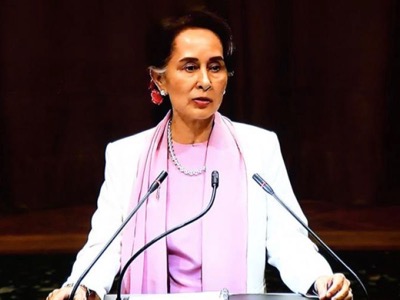 Remarks by H.E. Daw Aung San Suu Kyi, State Counsellor and Union Minister for Foreign Affairs of the Republic of the Union of Myanmar as Agent Before the International Court of Justice

Mr. President and Members of the Court, It is not disputed that Myanmar – like the United Kingdom or the United States – has a military justice system. The Constitution of Myanmar cannot and should not be ignored if we are serious about establishing constitutional democracy and rule-of-law in Myanmar.

International criminal tribunals take four to eight years to undertake investigations of core international crimes, sometimes longer. Just over two years have passed since the serious internal armed conflict against the ARSA, and the second court-martial is now underway. The Gambia has not challenged the quality of the military justice in the Inn Din case, only the pardon, which many of us regret. The ongoing Gutar Pyin court-martial in Buthidaung Township should be allowed to run its course. I am confident that there will be further courts-martial after the submission of the final report of the Independent Commission of Enquiry in a few weeks.

Mr. President, it is vital for Myanmar’s present and future that our civilian and military criminal justice systems function in accordance with our Constitution. Where a country has a military justice system, neutralising this system by externalising justice in effect surgically removes a critical limb from the body – the limb that helps armed forces to self-correct, to improve, to better perform their functions within the constitutional order.

Mr. President, Members of the Court, in my opening statement yesterday, I mentioned that international justice is a practice that affirms our common values, and that we look to justice as a champion of reconciliation and harmony that will assure the security and rights of all peoples. Allow me, in this context, to mention one example of what we are doing on the ground in Northern Rakhine to further reconciliation between communities.

In January 2019, the ‘In Transformation Initiative’ (ITI) – directed by Mr. Roelf Meyer, a transitional justice leader in South Africa – launched the ‘Rakhine Transformation Project’ that aims at preventing the recurrence of historical violence and paving the way for sustainable, voluntary return of peoples displaced by violence. In the words of Mr. Meyer himself, I quote: “nine months after its inception, and despite increased fighting in the area between the AA and the military, the project has gained sufficient traction in Maungdaw for it to be regarded as sustainable”.

Mr. President, recalling the words about football in paragraph 18 of the opening statement of the Agent of The Gambia, allow me to present these pictures from a football match. Organised by the ITI, a football tournament recently took place at the Myoma athletic field in Maungdaw Town. Players and spectators are a mix from different communities in Maungdaw Township, the area at the centre of the 2016-2017 internal armed conflict in Rakhine.Adults and children, proud,enthusiastic, laughing and, most important of all, together. This is what we are striving to nurture in Rakhine, what we are endeavouring to foster throughout Myanmar, our country of great diversity, great potential, and great challenges.

Mr. President, Members of the Court, I pray the decision you make, with the wisdom and vision of justice, will help us to create unity out of our diversity, to develop the potential of our people, and to meet the challenges of a nation in quest of sustainable peace and development. Steps that generate suspicion, sow doubts, or create resentment between communities who have just begun to build a fragile foundation of trustcould undermine reconciliation. Ending the ongoing internal armed conflict between the Arakan Army and Myanmar’s Defence Services is of the utmost importance for our country. But it is equally important to avoid any reignition of the 2016-2017 internal armed conflict in Northern Rakhine.

Mr. President, Members of the Court, I now conclude by formally presenting to you the final submissions of Myanmar. These are as follows:

“In accordance with Article 60, paragraph 2, of the Rules of Court, for the reasons given during the hearing from 10 to 12 December 2019 and any other reasons the Court might deem appropriate, Myanmar requests the Court:
• to remove the case from its List;
• in the alternative, to reject the request for the indication of provisional measures submitted by The Gambia.”

Mr. President and Members of the Court, that concludes Myanmar’s observations. I thank you for your kind attention, and I also thank the staff of the Registry for all assistance offered to our delegation.