Mark Esper on Iran in Iraq 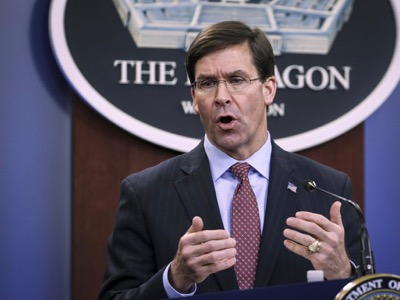 Last Friday, the Iranian-backed militia Kata’ib Hizbollah or KH launched yet another attack against American forces in Iraq, resulting in the death of one American civilian, and injuries to four American service members, as well as two of our partners in the Iraqi Security Forces. This continues a string of attacks against bases with U.S. forces and Iraqi Security Forces. KH has a strong linkage to the Iranian Revolutionary Guards Quds Force and has received lethal aid, support, and direction from Iran.

Over the last couple of months Iranian-backed Shia militias have repeatedly attacked bases hosting American forces in Iraq. These attacks have injured our partners in the Iraqi Security Forces, but fortunately Americans were not casualties of these attacks until last week. On November 9th, Iranian-backed Shia militias fired rockets at Q-West Air Base located in North-West Iraq. On December 3rd, they conducted a rocket attack against Al Asad Air Base, and on December 5th, they launched rockets against Balad Air Base. Finally, on December 9th, these same militia groups fired rockets at the Baghdad Diplomatic Support Center located on the Baghdad International Airport. It is clear that these attacks are being directed by the Iranian regime, specifically IRGC leadership.

In response, U.S. leaders have repeatedly warned the Iranians and their Shia militia proxies against further provocative actions. At the same time, we have urged the Iraqi government to take all necessary steps to protect American forces in their country. I personally have spoken to Iraqi leadership multiple times over recent months, urging them to do more.

After the attack last Friday, at the direction of the President, U.S. forces launched defensive strikes against KH forces in Iraq and Syria. These attacks were aimed at reducing KH’s ability to launch additional attacks against U.S. personnel and to make it clear to Iran and Iranian-backed militias that the United States will not hesitate to defend our forces in the region.

On Tuesday, December 31st, at the instigation of Shia militias, violent rallies of members of these militias outside the American embassy in Baghdad resulted in damage to exterior entry facilities and buildings at the embassy compound. We know it was Iranian-backed Shia militias because key leaders were spotted in the crowd and some militia members showed up wearing their uniforms and carried the flags of their militia, including KH. We continue to urge the Iraqi government to prevent further escalation. Leaders of the Iraqi government have condemned the attack on the U.S. embassy, including the Iraqi president, prime minister, foreign minister, and speaker of the parliament. Additionally, regional and international partners have condemned the attacks on U.S. facilities, including Saudi Arabia, UAE, and Bahrain in the region, and the E.U., Germany, France, and others around the globe.

Let me speak directly to Iran and to our partners and allies. To Iran and its proxy militias: we will not accept continued attacks against our personnel and forces in the region. Attacks against us will be met with responses in the time, manner, and place of our choosing. We urge the Iranian regime to end their malign activities.

To our partners and allies: we must stand together against the malign and destabilizing actions of Iran. The 81 nations and member organizations of the Defeat ISIS Coalition are in Iraq and Syria, and cooperating around the globe to defeat ISIS. We have worked closely with our partners in the Iraqi Security Forces and Syrian Democratic Forces to roll-back the so-called ISIS caliphate in Iraq and Syria and liberated millions of Iraqis and Syrians. NATO nations are also in Iraq to assist with building the capabilities of the Iraqi Security Forces. Unlike the Iranians who continue to meddle in Iraq’s internal affairs and seek to use corruption to further Tehran’s malign influence, the United States and our allies are committed to an independent, stable, secure, and sovereign democratic Iraq that addresses the aspirations and needs of the Iraqi people, who we see protesting for these very things and objecting to Iran’s malign influence. We call on our friends and allies to continue to work together to reduce Iran’s destabilizing influence so Iraq is governed by Iraqis without this interference in its internal affairs.