US notification of the elimination of Qassem Soleimani 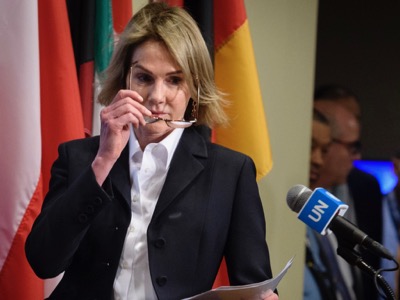 Over the past several months, the United States has been the target of a series of escalating threats and armed attacks by the Islamic Republic of Iran. These have included a threat to the amphibious ship USS Boxer on 18 July 2019, while the ship was conducting a planned inbound transit of the Strait of Hormuz, by an Iranian unmanned aerial system, which was previously reported to the Council, as well as an armed attack on 19 June 2019 by an Iranian surface-to-air missile on an unmanned United States Navy MQ-4 surveillance aircraft on a routine surveillance mission monitoring the Strait of Hormuz in international airspace. The actions taken by the United States occurred in the context of continuing armed attacks by the Islamic Republic of Iran that have endangered international peace and security, including attacks on commercial vessels off the port of Fujayrah and in the Gulf of Oman that threaten freedom of navigation and the security of international commerce, and missile and unmanned aircraft attacks on the territory of Saudi Arabia.

The United States wishes to note – as it has done repeatedly over the past years – that we remain committed to a diplomatic resolution. We stand ready to engage without preconditions in serious negotiations with Iran, with the goal of preventing further endangerment of international peace and security or escalation by the Iranian regime.

I ask that you circulate the present letter as a document of the Security Council.

Source : “US notification of the elimination of Qassem Soleimani”, by Kelly Craft, Voltaire Network, 8 January 2020, www.voltairenet.org/article208852.html

United States Ambassador to the United Nations (since 2019).

Source : “US notification of the elimination of Qassem Soleimani”, by Kelly Craft, Voltaire Network, 8 January 2020, www.voltairenet.org/article208852.html