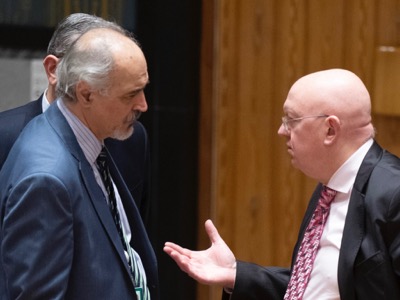 Reaffirming its strong commitment to the sovereignty, independence, unity and territorial integrity of Syria and to the purposes and principles of the Charter of the United Nations,

Emphasizing that more than 11.1 million people in Syria require humanitarian assistance and that the cross-border mechanism remains an urgent and temporary solution to address the humanitarian needs of the population, which cannot be reached through existing operations within Syria,

Determining that the devastating humanitarian situation in Syria continues to constitute a threat to peace and security in the region,

1. Calls upon all parties to ensure principled, sustained and improved humanitarian assistance to Syria in 2020;

2. Reiterates its demand that all parties, in particular the Syrian authorities, immediately comply with their obligations under international law, including international humanitarian law and international human rights law as applicable and further demands the full and immediate implementation of all provisions of all relevant Security Council resolutions, including resolutions 2139 (2014), 2165 (2014), 2191 (2014), 2258 (2015), 2332 (2016), 2393 (2017)2401 (2018), and 2449 (2018), and recalls that some of the violations and abuses committed in Syria may amount to war crimes and crimes against humanity;

3. Decides to renew the decisions in paragraphs 2 and 3 of Security Council resolution 2165 (2014), for a period of six months, that is, until 10 July 2020, excluding the border crossings of Al-Ramtha and of Al Yarubiyah;

4. Further demands that all parties allow safe, unimpeded and sustained access for United Nations’ and their implementing partners’ humanitarian convoys, including medical and surgical supplies, to all requested areas and populations according to United Nations’ assessment of need in all parts of Syria;

5. Reiterates that the situation will continue to deteriorate further in the absence of a political solution to the Syrian conflict and recalls its demand for the full and immediate implementation of resolution 2254 (2015) to facilitate a Syrian-led and Syrian-owned political transition, in accordance with the Geneva Communiqué as set forth in the ISSG Statements, in order to end the conflict in Syria and stresses again that the Syrian people will decide the future of Syria;

6. Requests the Secretary-General to report to the Security Council by the end of February 2020 on the feasibility of using alternative modalities for the border crossing of Al Yarubiyah in order to ensure that humanitarian assistance, including medical and surgical supplies, reaches people in need throughout Syria through the most direct routes, and in accordance with the humanitarian principles of humanity, neutrality, impartiality and independence;

8. Requests the Secretary-General to brief the Council monthly and to provide a report on a regular basis, at least every 60 days, on the implementation of resolutions 2139 (2014), 2165 (2014), 2191 (2014), 2258 (2015), 2332 (2016), 2393 (2017), 2401 (2018), 2449 (2018) and this resolution and on compliance by all relevant parties in Syria and further requests the Secretary-General to continue to include in his reports overall trends in United Nations cross-line and cross-border humanitarian access and detailed information on the humanitarian assistance delivered through United Nations humanitarian cross-border operations, including on the number of beneficiaries, locations of aid deliveries at district-level and the volume and nature of items delivered;